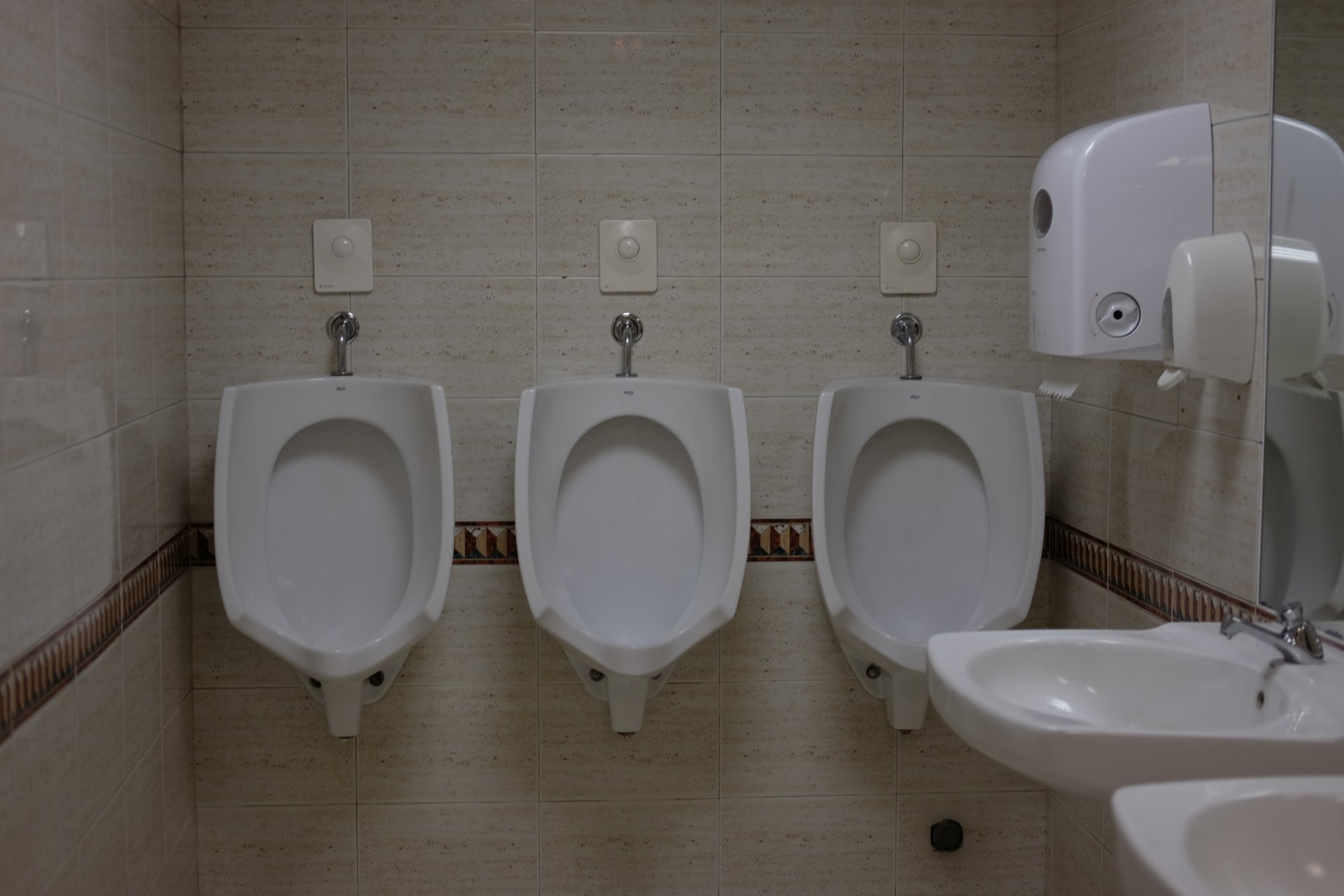 so over our 12 days in spain, we’ve had to make a few adjustments from life in asia.  nothing groundbreaking but these were some of the things we’ve noticed on a daily basis.  keep in mind that neither of us have been in europe for almost a year and a half so.  i also think that coming from north america, i’d have an easier time adjusting to some of the oddities as compared to adjusting to the nuances of life in asia and having to break out of that mold again.  anyhow, here’s the list…

urinals
i first noticed this on our stopover though istanbul en route to barcelona.  ran to the first bathroom upon landing and the urinals were waist high.  uh, ok?  the bathroom was completely packed with sweaty, pee-dancing travelers so nobody noticed me tiptoeing to get my business done.  maybe the middle easterners are a little taller than the rest.  enter spain… so many urinal issues in so many toilets

a) the desensitization chamber – a mcdonalds in barcelona needed a pin combination to get into their bathrooms.  once inside, the urinals were about 3/4 thigh high.  we’ll work with what we’re given.  about 20 seconds in, the motion sensor lights go out.  waving with my free hand does nothing.  after taking a few steps back after i assumed i had ‘finished’, the lights came back on and i noticed that there are healthy sized puddles on the floor next to the urinals, not completely from my doing.  thumbs up.
b) the majority of urinals are near waist high.  from what i’ve seen, spaniards aren’t that tall on average so i don’t quite understand the need for the high-piss challenge.  note: high trajectory and long distance seems to work.  which leads me to…
c) very few urinals have blockers in between and if they do, they’re usually quite small… maybe half the size of the urinal itself.  my eyes don’t have a tendency to wander but when you’re in tight quarters, accidents happen.  which leads me to…
d) this bathrom in el cortes ingles, a large department store chain throughout spain.

now i’m not a design expert but why in the name of all things that smell like urine are these urinals so close to each other that three men could be chafing their thighs as they step up to bat?  spain, you riddled me well.

buying train tickets
bad website ecommerce combined with unmaintained/user-unfriendly kiosk machines and massive wait lines at the ticketing office made for a horrible experience to purchase tickets.  maybe our attempt to purchase tickets coincided with some IT issues but either way, it took longer than it needed to and we certainly weren’t the only people scratching our heads when trying to figure out these kiosks.  more details here in the ‘greatest challenge’ section

finding the much needed womens’ bathrooms
less of an issue for me but haha has had a hell of a time looking for bathrooms throughout barcelona, madrid, granada and sevilla.  it seems like there are very few public bathroom stalls, the ones that are available are usually paid (about 1/2-1 euro per) and then the bathrooms close to major attractions are lined up out the door.  the womens’ will usually be lined up out the door while nobody is in the men’s bathrooms so i believe that she may have used the men’s bathrooms in a few instances.

cold, rainy weather
we’ve brought the vancouver weather to the first three stops in spain.  temperatures remained around the 15 degree mark on average with a few sunny days mixed in but everyday had a bit of brisk or cold temperatures until the end of our granada stay.  as the days went along, the wet weather came in full force.  barcelona saw a few drizzles.  madrid had full days where it was raining, keeping us inside for a few of them.  granada gave us complete downpours almost to the point of flash floods (reminding us of one of our most memorable days in cinque terre where we were left stranded in a restaurant during a flash flood).  fortunately things turned around for our last day in granada as well as sevilla.

washing machines
so in madrid we had an issue with our washing machine running for hours on end.  we looked up instructions online and tried to decipher the few icons we had on our machine, unsure of if pressing the buttons down rendered the feature to be ‘on’ or ‘off’.  especially confusing when some icons have an X through them.  so are we enabling the ‘no spin’ option or is the no spin option turned on by default and we’re turning it off, thereby turning the spin on?  i’m sure that i overthunk this but we tried multiple cycles before giving up and turning all the features on for the longest cycle.  six hours later we were left with a steaming pile of hot clothes to hang at 330am. (post here)

our granada washing machine went off without a hitch though.  one cycle, no option to dry and we hung dry our clothes; it was great to have a few heaters at our disposal to speed things along as well.  sevilla was a step up in the right direction; we were given english and spanish instruction, detergent and the washing machine even had multiple drying options depending on if our clothes were meant to be hung or folded.  it was only after this that we figured out that our first machine likely had the draining function broken since the heat for the drying cycle had already been started.  quite different from our experiences with japanese appliances (that might be complicated as hell to use but work flawlessly) but i think we’ve muddled our way along this steep learning curve.  looking back at it, maybe not having a washing machine in barcelona was a blessing in disguise.

(in)convenience stores
this might be my biggest adjustment, coming from asia.  spain has had a shockingly low number of supermarkets and convenience stores at our disposal.  there are many markets, most of those being food stalls rather than grocery stalls.  while popping into a supermarket is generally not a quick and easy pit stop, asia in general is so efficient that it was usually over in a matter of minutes.  enter spain.  first off, almost all supermarkets are closed on sundays.  then, during the weekdays you have to deal with the afternoon break where for some portion between 2-6pm, stores will close their doors in hopes that you’ll go somewhere to get your drink on or have a nap (possibly in that order).  contrast this to any neighbourhood in sapporo, tokyo, hong kong and taipei and there are at least 3 stores per block open 24 hours a day that could have you in and out within a minute.

hours and being closed
oh spain… the country that takes siesta breaks and closes early.  supermarkets close before 10pm, public gardens take afternoon breaks at 2pm and the majority of restaurants shut their doors between 3-4pm.  we were wandering the carmen de los martires at our leisure, taking in the massive park at a very slow pace and by the time we finished half of it, we were approached by a staff member that proceeded to usher us out of the gates so that they could close up shop for a few hours.  we managed to book the last available time slot for the alhambra one day at 7pm and a few minutes before 8pm, were were again approached by staff that they were closing at 8 and started to push us through rest of the tour.  fortunately, the 3-4 hours that we had already spent on the grounds and in the palace had left us speechless and we only had about 1/3rd of the way to go but it still felt a little cheesy that they allowed for such a short amount of time past the last entry time considering how much there was to see.  we had another evening where we were wandering madrid, expecting to pick up some food to make dinner at home that evening.  well by 9pm we figured that we had better get cracking to get our ducks in a row but we didn’t stress about it too much since we were going to be going by the mercado de san miguel, one of the newly redone markets with ‘many merchant stalls for you to find anything you want to take home’.  i must be a retard for thinking that would mean that we could pickup any sort of groceries (even cured meats and wine).  we passed one grocery store at about 925pm en route to this market, got to the market only to realize that they did not have anything you could take home except for fresh seafood or desserts, left the market and stopped by another grocery store that was open at the time only to find out that they had no meats, breads or wine available, went back to the grocery store only to find out they had closed at 930pm, stopped off at a restaurant that looked cute from the outside but once inside, realized they had no atmosphere and average food, went back to the market to eat one of the succulent hamburgers we were eyeing only to find that that ONE booth was already in the process of cleaning up and ended up eating another helping of paella.  thankfully, we’ll be in europe for quite some time and if i haven’t adjusted to the hours by the end of our stay, i don’t deserve to travel ever again.  mental note: asia is uber efficient.  the rest of the world is not.

at the end of it all, it’s obvious that i need to change my habits.