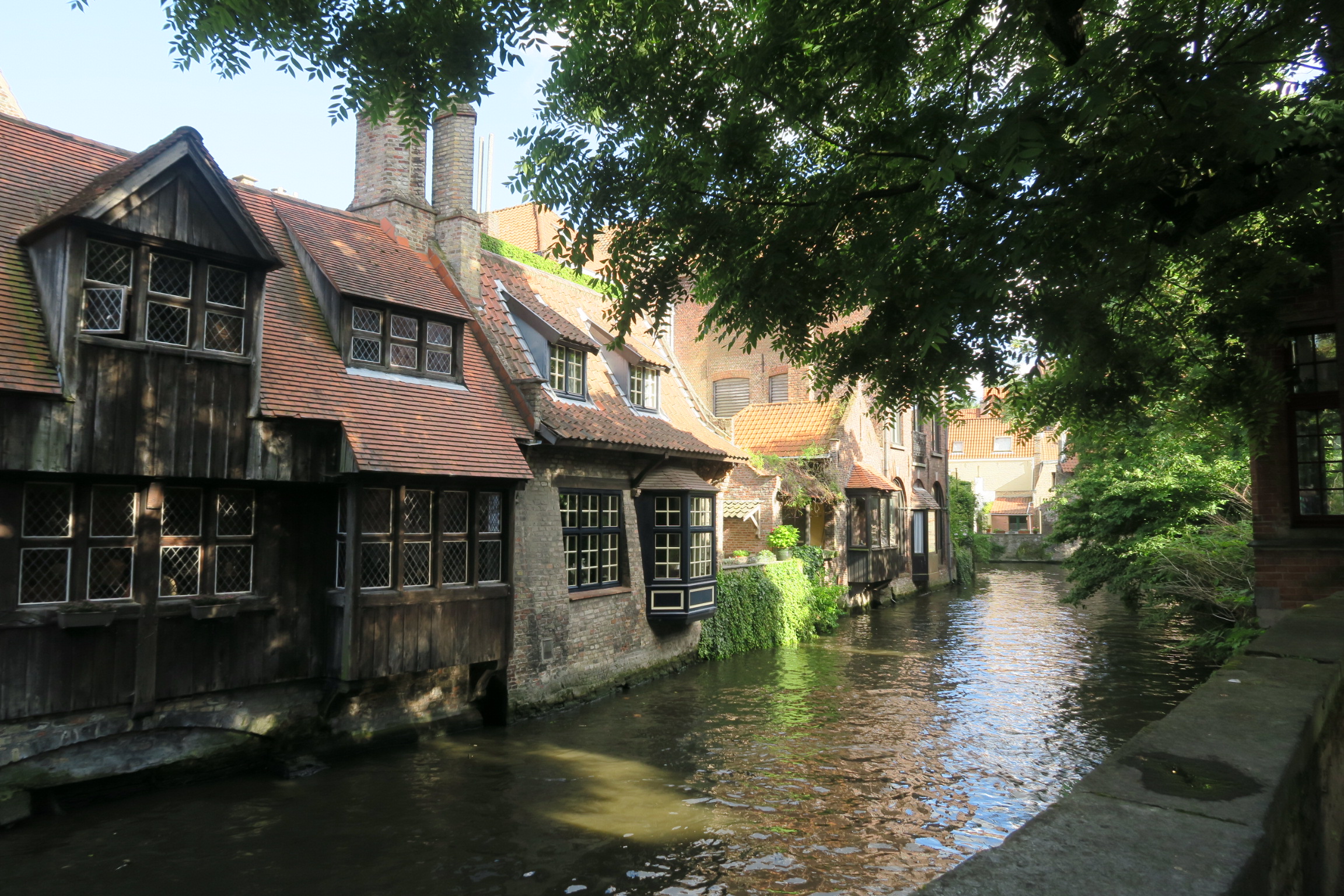 jojo:
what do i like?
-insert ‘gorgeous city description and ramble on about how the architecture is so nice’

-but seriously, this is one old city.  the belfry tower in the center of the city is rougly 800 years old while most of the city’s core is in the 400 year old range.  there is one bar on the outer area of town that is 500 years old

-many canals running through town.  the only city that i’ve been to that’s similar to this is avignon (france) and that was more of a moat

-i have a thing for cobblestone streets.  i love the character they add to every street even if it makes walking somewhat treacherous if you’re clumsy like myself
-people are very friendly in both brussels and bruges.  lots of people smiling back which is a huge adjustment from the stoic faces of poland and latvia.  and just because they speak french it doesn’t make them anything like the laissez-fare french

-chocolate, waffles and pastries.  i only have one pair of pants and i run the risk of not being able to wear them after we leave belgium

what do i dislike?
-the majority of the city shuts down before dusk.  it seems that the further west in europe we go, the less hours people work.  grocery stores close at 630pm.  many restaurants close in the afternoons and reopen between 530-630pm however they stop dinner service between 9-10pm.  it felt like almost every restaurant that we had wanted to go to for dinner was closed, this extended to brussels as well where i could hardly find any french fry places open (at least ones that weren’t in the center of town).  the final straw was when we walked to a recommended restaurant we had been eyeing for our first night in bruges only to find out that they only open on saturday and sunday.  i’ve heard of compressed work weeks but what is that about?!

-kitchy and as touristy as any city we’ve been to.  haha’s suggestion of ‘we have to take a canal boat ride’ changed once she saw how jam packed the boats were not to mention the lineups to get on them.  horse drawn carriages boot around town at 50 euro for a 30 minute ride.  this isn’t a large town by any stretch of the imagination.  not only that but even with the poop bags that the horses carry around, there’s still a fair bit of crap littered around town (larger than what most dogs could create).  haha got lucky twice and ended up with a shoeful of poop on our first day in the city.

what do i like/dislike about the new accomodations?
-small hotel room in the center of town.  very convienent but not much more to it than that.  the room smells like what my dog smelled like after she’d come home from the groomers which i actually like but it’s a little weird to sleep in that aroma.  the shower is, well, an adventure as many of our showers have been this trip.  i’m thoroughly convinced that north america is a world leader in shower technology.  so the first shower episode went like this…

so once the water is turned on, the showerhead naturally wants to go all crazy-snake-ish on you from the water pressure.   well after you’re wet and ready for the soap, where is it?   mounted to the wall…

so the difficulties this shower poses is:
-you can’t stand otherwise water splashes everywhere instantly
-you can’t leave the showerhead floating freely otherwise water shoots towards the ceiling, among other directions
-you can’t lock the showerhead to the holster without turning the water off otherwise water rebounds off of the tap
-turning off the water each time you use the soap is slightly a pain in the ass since it’s not one that has instant temperature control
-squatting with your back against the wall does work however you can’t reach the soap with both hands in this position
-squatting facing towards the soap makes it reachable but doesn’t really work unless you have thighs the size of a schoolgirl, which i have never been mistaken for
-this forced me to sit on my ass while bathing and pinning the showerhead down with my knee as i indulged in the soap buffet.

i can appreciate that this hotel would like us to be prudent with our water usage but how responsible is it if we save water while brushing our teeth only to spill more than that on our bathroom floor?  who the hell ok’d this bathroom design?  are taking baths the solution to saving water?  maybe my math training has got it all wrong and ‘less’ is really ‘more’ in this case?

biggest adjustments from the previous stop?
much more compact than brussels and we’re in a hotel once again which we typically find less comfortable than an airbnb due to the smaller space and lack of amenities.

what was our first meal?
bocca pasta bar.  5 euros for a box of pasta and your choice of a bunch of sauces.  nothing special though much better than some of the options for a quick bite.  penne with bocca sauca & bacon which was like a vodka a la penne and penne with beef and broccoli and cream sauce for haha.

overall impressions?
i’m lukewarm on bruges so far and i’m glad that we chose to cut our stay down from five days to three so that we can leave on a good note and not feeling like the stay is dragging on.  i wanted to live like colin farrell for a few days and i’ll get over that fantasy quickly.  really looking forward to the salvador dali museum here since his artwork is mind bending.  aside from that, we’re going to get our final fill of chocolate, waffles, fries and flemish food before we make our way to france where we will indulge in chocolate, pastries, fries and frenchish food.

Bruges is small and charming. We walked around town and hit most of the highlights in 5 hours. It’s nicely cleaned up for the tourists, like Disneyland.

Weather isn’t great in Bruges, rainy and cold most of the time. Lots of horse carriages leaving behind poopy smells and nuggets of poop for me to walk in.

It’s an old hotel with funky old house smells. The bed is surprisingly comfortable. Wifi connection sucks, my old iPhone 4 couldn’t even connect to the wifi. Shower definitely gets taking used to.

Most restaurants close by 9pm…wtf?!

Pasta in a box is surprisingly good. And we had fries for dessert.

I am glad we came to Bruges, it’s so charming there isn’t much to dislike. Lots of great places for photo opportunites. Hopefully,  the weather will improve as we plan to take a bike ride to nearby Damme.