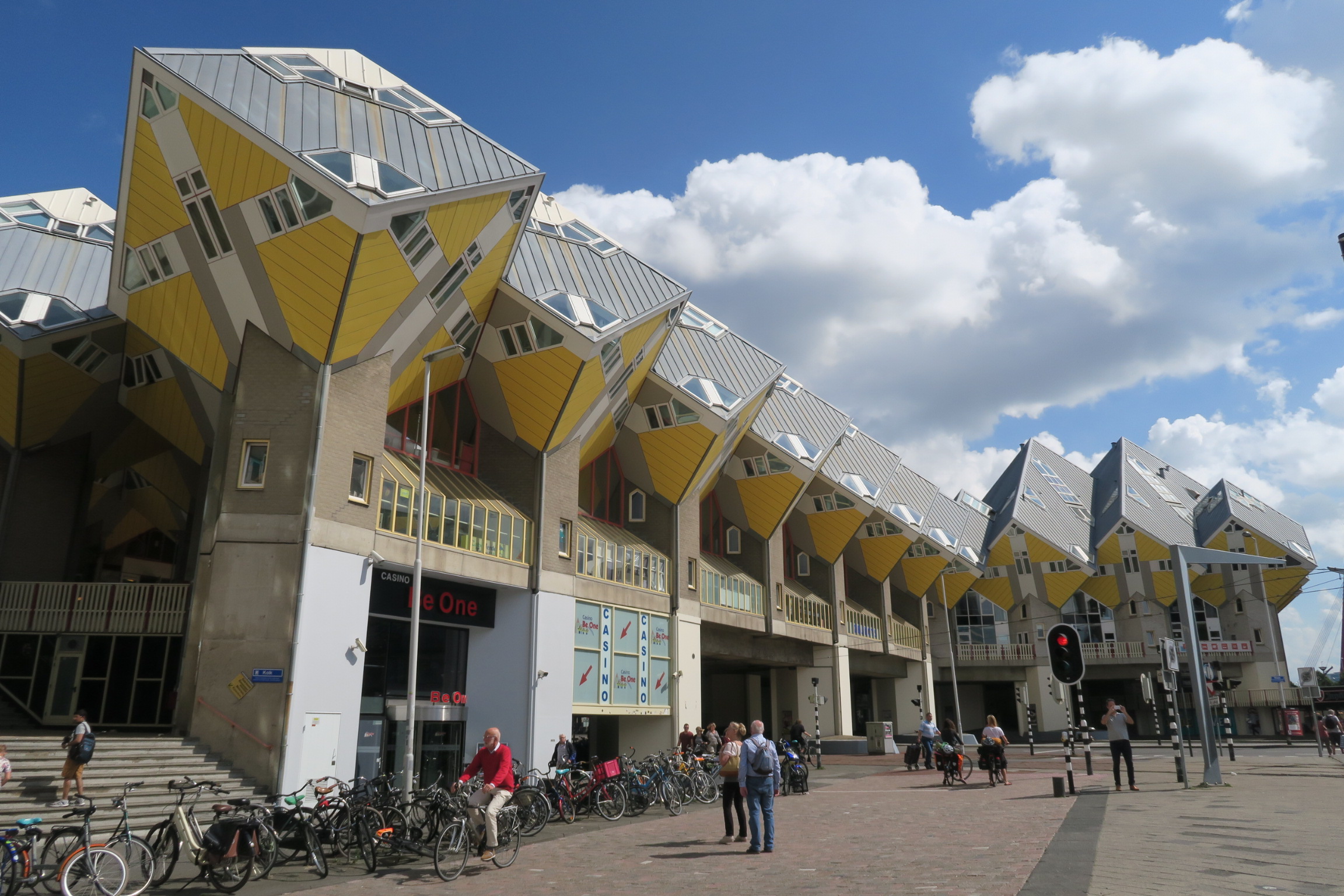 jojo:
what do i like?
-modern architecture.  clean lines, lots of mirrors and lots of angles.  i’m loving the look of rotterdam.  we have seen a lifetime of old, european architecture and i was starting to get a little depressed

-we’re in the land of patios and biking.  in one sense, it feels a lot like home.  well, except our patio season is one month long.  and our city bylaws are patio nazis.  but it still reminds me of home.

-lots of choice when it comes to food; the sticker shock hasn’t been that bad especially after belgium and the food quality is much better.  groceries are cheap
-the ummm, air quality, is better here.  tobacco doesn’t seem to be as prevalent here or maybe it’s because people are smoking something else

what do i dislike?
-we’ve been stuck inside the train station gates twice due to the design of the system.  once, we forgot to ‘tap out’ from our previous ride at a station with no entrance/exit gates and that blocked us from exiting a gate at our next destination.  the first incident happened as we arrived into rotterdam so there’s no way we would have possessed a transit card by that point.  in fact, there weren’t even any machines where we had arrived.  the security guard seemed confused as to how we arrived into a locked area in the first place… to which i was thinking “you know, the train that the other 1,000 people just came off of?)
-i feel like neo having to dodge all these bikes here.  copenhagen seemed to have just as many if not more cyclists however they all rode in an orderly pattern.  the ones in rotterdam (and the hague) look like they’re blind as i can’t predict which way they’re going.
-canals.  yes, i’m a buzzkill.  but every city i’ve been in that has canals running through through the city makes me feel like i’m living in a swamp.  lovely in pictures but they’re all dirty and have trash piling up in them.  amsterdam is going to be interesting.
-i have completely given up trying to learn the native tongue these days.  french is hard enough for me but german, polish, latvian and dutch all sound the same and are making my head spin.  sometimes when i say thank you, the words in my mind are spanish, portuguese or french and this foreign mishmash of dribble comes out of my mouth.

what do i like/dislike about the new accomodations?
-this place is so spacious yet sparsely decorated that it feels like a cave.  a cave with more natural light than a solarium.  we are, once again, in an ikea furnished apartment and though it’s not glamourous, it does the job just fine.  we have a lot of room to sprawl out in and we’re a minute’s walk from a central metro line so very little time should be spent on transit this week.

-our shower is a conventional, stand-up, curtained shower that doesn’t ‘really’ leak but our toilet is interesting.  at least if the weather doesn’t pan out, we have mother nature in our bathroom.

-what i want to know is how many of these toilet seat designs did they stock, wherever our host ended up buying this from.  was it a one-off clearance model or are there other dutch people who have brought the great outdoors into their homes?

biggest adjustments from the previous stop?
-the diversity in rotterdam has both impressed and surprised me.  nearly 50% of the city’s population is made up of foreigners, the largest group of those hailing from suriname in south america.  dutch and english are the languages we’re hearing the most but the ethnic diversity translates to a very diverse selection of food.  like berlin, our first three meals were all different.  indian food for our first dinner, vietnamese for lunch and moroccan for our second dinner left our tummys in a happy state at the end of our first 24 hours in the city.  unlike berlin, however, the prospect of sampling the local fare isn’t making me drool.  mmmm, pickled herring!

what was our first meal?
indian food in our neighbourhood.  this might come as a shocker but the name of the place was “curry’s”.  where they lacked in creativity they made up for in taste and portion size.

and a whole wack of sideplates to complement our brown & orange diet.  this dinner cost us 40 euros which has been the average price of a meal in any country that’s part of the eu but at least we didn’t leave hungry.

overall impressions?
i’m pleasantly surprised by the feel of the city.  we did do a daytrip to the hague on our first full day here so we haven’t quite gotten a good lay of the land yet but i have an optimistic outlook on how this week is going to turn out.  the city feels like it has much more life than the last three we’ve been to (maybe even since berlin a month ago) and the prices are in line with what i’d expect out of any western european nation.  the one downer i do forsee is the weather since we opted to spend a week here in order to fit in a final beach day or two.  only time will tell but in any case, there are lots of options to fill our days up if the weather stays nice.

Rotterdam is very modern, the city decided to build new stuff instead of replacing the old stuff after WWII. It feels less touristy here. The neighbourhood we are in is very nice with a huge supermarket close by. I’m loving the fresh juices from the supermarket. Lots of flavours beside orange or apple, like strawberry and kiwi. It’s cheap too, only 3€ for a 1L bottle of fresh juice.

So many bicycles here. And they move fast and seem to be coming from every direction. My hate-hate relationship with bicycles is being further tested in Rotterdam.

The airbnb is very spacious and has lots of windows so it’s very bright and airy. It’s nice to have a dining room table to have meals on and use as desk space. The unit is above a car repair garage so we can’t really sleep in very late, by 9am there’s a lot of drilling and thumping noises coming from downstairs. Also, the person above us seem to have elephant feet, ceiling shakes a little when he/she stomps around at night.

Not much adjustments needed. Rotterdam is modern, urban and multicultural. Seems like everyone here speaks English. It almost feels like being home, even the weather feels similar, just with a lot more bicycles.

what was our second meal?

Ended up with having pho in Den Haag. The taste was pretty good but so expensive at 12€ for the large bowl.

I was expecting Rotterdam to be grimy and dirty but so far I have been pleasantly surprised by how nice and clean it is. I love the multicultural aspect of the city. So nice not to be the only non-white person around.

staying fed in the netherlands