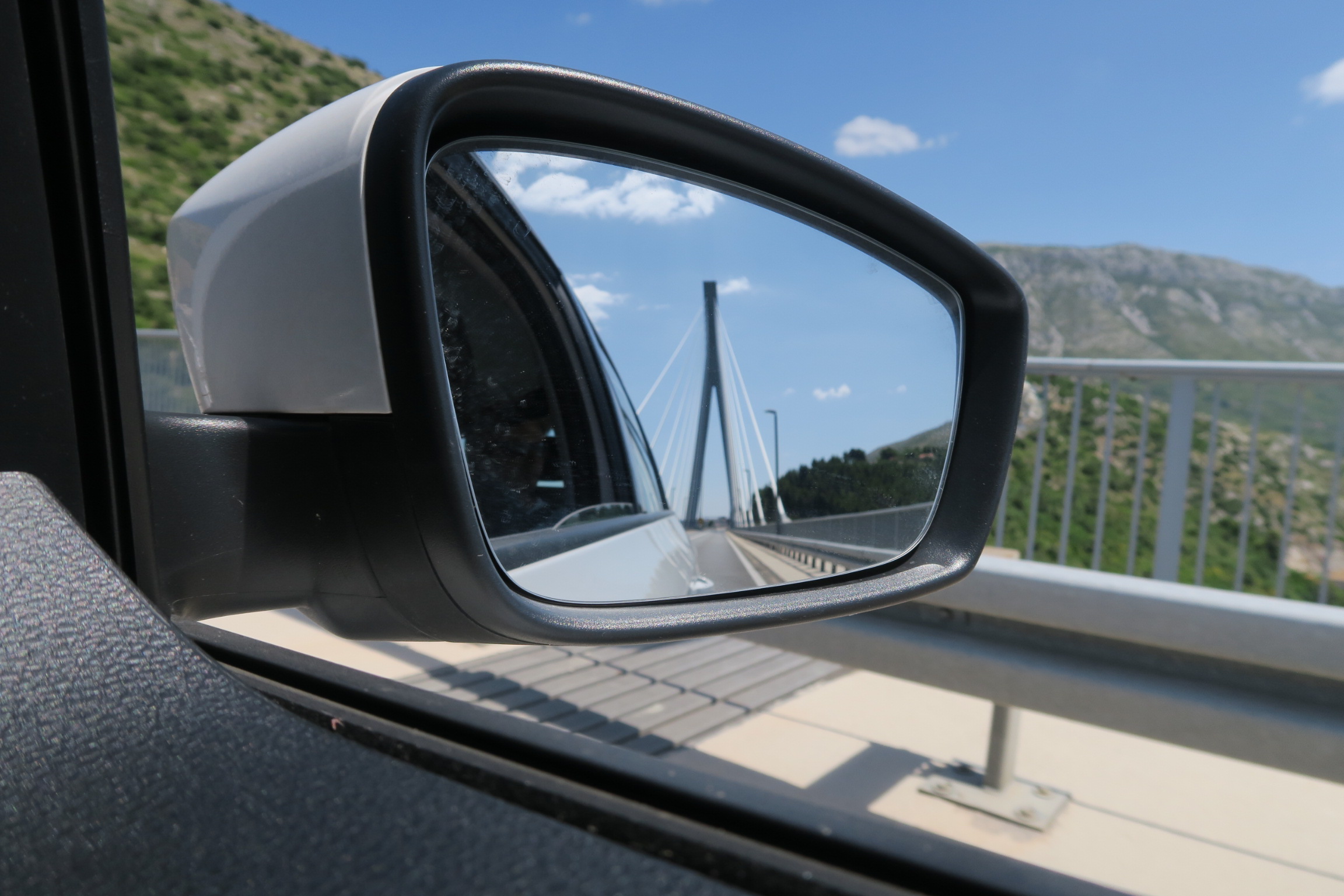 we picked up a rental car to service us for the next 10 days while traveling around croatia.  getting from dubrovnik to split is a relatively straightforward trip as both towns/cities are tourist destinations but by driving, we got to admire every little part of the amazing adriatic highway.

we picked up our rental car around 10am and since we were in no hurry to get to split, we made plans to stop a few times along our drive.  our first stop was mount srd just south of dubrovnik.  a cable car can whiz you up to the top for 120 kuna ($24 cad) per person and renting a car was about the same price.  we’re so asian 😛

what they don’t tell you if you’re going to drive us is that croatian roads are infamous for being narrow and this was no exception.  there were a number of tight switchbacks and the road in most areas are only wide enough for one car at a time.  there are passing areas scattered throughout the uphill climb but there’s definitely some reversing that needs to be done.

from what i’ve read, this is one of the easier mountain roads in croatia. the trek is definitely worth it and by driving to the top, we were able to get ourselves to a vantage point away from the cable car crowds and towers

it’s no surprise that both of us are game of thrones geeks and we really enjoyed looking down upon dubrovnik/king’s landing from here.  the picture of the bright orange rooftops, light grey bricks, perfectly maintained wall and vibrant blue sea together are postcard worthy

about 45 minutes from dubrovnik is a small town called ston.  we heard about this from a man we met on a ferry ride to lokrum island (another filming location for game of thrones and only 15 minutes from old town) so we stopped there for some of their world famous oysters.  ston also has one of the longest city walls in the world but we didn’t have time to hike them on this day.  i would have liked to have made my way up to get a better view of europe’s oldest salt farm.  salt was a very valuable commodity and this farming has fed the economy of the republic of dubrovnik to this very day.  the farms are even accepting volunteers to learn the ways of the harvest which seemed very interesting.  perhaps during my next stint of unemployment 🙂

after getting some food in our bellies we continued north along the d8 highway until we arrived at the border to bosnia herzegovina.  along this whole adriatic coastline, croatia owns all of it except for this 20km stretch and passage through the borders is relatively painless.  the town of neum is less than 5,000 at the last tally and has many sandy beaches to choose from with cheaper prices than croatia.  we definitely wanted to stay for a few hours but by the time we contemplated it, we were already at the border to re-enter croatia!

from here the highway veers inland for a portion.  farmlands run for miles into the horizon as the roads wind up and down through the mountain ranges.

we kept our eyes peeled for the signs to ploce as that’s where the the path to split, well, splits into two.  the 425 highway leads to the e65 and that is the quicker, inland path.  we opted to stay on the coast and continued along the d8

we came across a long stretch of road that was populated with fruit stands.  among fruits, lavender, rosemary and honey are harvested in this region and each one these stands had many such items to pick from.  we would have loved to pick up some fresh honey but such are the limitations of travelling with carry-ons 🙁

we did pick up some fresh fruit for our next pit stop.  not only is it fresh but it’s cold too!  these fruit & drink showers are a brilliant idea!

getting back on the adriatic highway takes you along the makarska riviera and it’s 60km stretch of towns and beaches.  the highway is quite elevated from the towns but every so often, pristine beaches will poke their noses out of the winding coastline.

As per normal, the weather was rising up into the 30s this day and even with the ac on full blast, i was getting extra sleepy as i drove into the sunshine.  we stopped at a small beachtown called brist and recharged ourselves with a dunk and some fruit.

from here it was about another 90 minutes to split and the sun was starting to come down over the horizon.  we stretched this drive out to nearly triple the time it should have taken and enjoyed every moment.  croatia has so much to see and all of it is downright gorgeous.  i can already tell that two weeks in the country isn’t going to be enough.