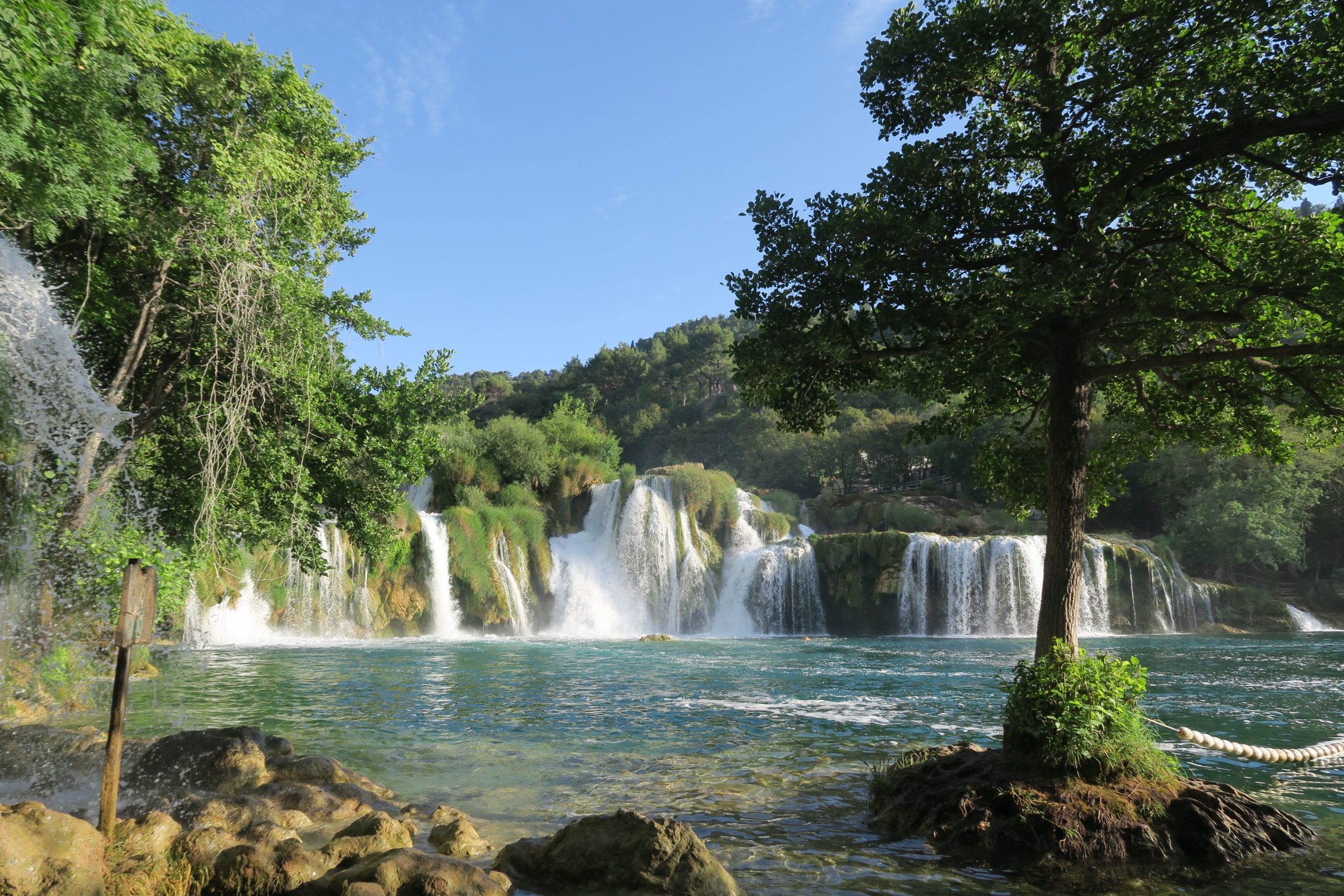 i’ve learned that driving to croatia can be both relaxing (like our coastal drive), harrowing like trying to find our split airbnb in a city built on one-way traffic and on this day, extra confusing.  why do i say that?  well this same situation reared it’s head a few times during our travels.  we’ll be travelling along, awaiting the next turnoff when all of a sudden all of us turn our heads around and say “that one?”.  the signage for veering off onto onramps, offramps and roundabouts are usually so close to where we need to turn that even with looking for it, it zips right by us in an instant.  factoring that into our daytrips usually adds an extra hour or two to renavigate ourselves and the reason for that is that the difference between the speed limit on a rural highway and a toll highway is huge.  HUGE.  i’m talking over 100km/h DIFFERENCE.

the toll highways in croatia are nothing short of awesome.  open roads, little traffic, wide lanes and not a single policeman from all the hours we spent driving on them.  the flip side to that are the rural highways which usually have speed limits in the 50-80 km/h range, wind endlessly through multiple towns and have blind corners galore.  they’re not dangerous per se but definitely require some attention through all the turns.

with that said, we ventured off and missed a few turns here and there on our way to the town of klis, just 20 minutes outside of split.  our geekiness brought us there because it was a filming location for game of thrones

the fortress isn’t very big but it has been through countless wars and has changed hands numerous times by the romans, ottomans, slavs, croats, austrians, serbs and many other empires which i unfortunately cannot remember.  driving up from the highway, the fortress can be seen perched atop a large, jagged rock.

and once up above, the view doesn’t disappoint.

being situated at a point that overlooks both the water and the valley, the fortress of klis was a very strategic stronghold because it controlled passage through the lands.  reading the history of it is both amazing and sad once all the deaths have been chronicled.  on this exact land is where hundreds of thousands have lost their lives… and yet the fortress still stands through all of those wars.

we spent about two hours at the fortress and were ready for some lunch except that finding food at the town of klis wasn’t as easy as we had hoped.  the two cafe-bars (that’s what they’re actually called) only served drinks and the market was closed for some random reason.  so we headed north in the direction of our next destination when we saw two outdoor spits with lambs roasting on them.  we pulled over and got our eat on

love the outdoor kitchen idea complete with plumes of smoke

so we had plans to also visit plitvice national park the next day which boasts the largest waterfall in croatia but after seeing the pictures of krka i felt compelled to visit.  both parks feature a number of waterfalls but at krka the selling point is that you can actually get into the water.

once again we missed a turnoff to the main highway and ended up taking a single lane road all the way to krka.  this set us back an extra hour and by the time we arrived at krka we went directly to the large falls.  there are three main areas of krka national park:
-visovac – a small island home to the visovac monastery
-roski slap – a series of waterfalls that can be visited by boat
-skradinski buk – a large pool fed by 17 waterfalls of varying heights

we had arrived after 3pm so it was unlikely that we were going to be able to get around to visiting all three.  we started at skradinski buk which the free shuttle bus drove us downhill to.  you are also able to walk but, i won’t mince words here, we were being lazy.

the top of the skradinski buk area features a nature walk that winds its way down through some small lagoons.  to say that this place is a nature’s paradise would be understating the obvious.  according to what i’ve read, 860 species of plants, 18 species of fish and over 200 species of birds can be found within the national park of krka.  i wouldn’t be able to tell you how many we saw but there were plenty of photo opportunites everywhere i looked.

an alternate way down to the large pool is along the paved road.  as we made our way down the crowds were growing exponentially especially once we got to the upper falls.

from behind the fences, the mist from the falls was still very noticeable. walking down a few flights of stairs brought us to the main area… and it definitely felt like it.  a bridge takes you over to the wading zone and it felt like a zoo.  everybody and their twice removed uncles were there, in swim trunks and armed with selfie sticks galore.  the pictures i’ve seen online didn’t lie in the least, the waters were filled and it was l-o-u-d with screaming kids and people fighting for selfie vantage points

at this point i remember feeling defeated.  3 hours of slogging our way up here after multiple detours and the thought of driving home after being disappointed was looming over me.  the clouds were brooding.  we sat down to figure out what our next move was and within minutes, a tour group of 50+ people came up immediately beside us, laid their mountain of bags down and started stripping down to their bikinis and thongs right next to us. pretty sure that my eyes were rolling into the back of my head so i took a page out of spanish life and had myself a little siesta.   i think i was laid out for at least an hour, maybe two, possibly two and a half.  and when i woke up, there was…

the tour group was gone.  screaming kids were gone.  the people picnicing around us were gone.  i got up to take some pictures of the falls and there were a fraction of the people in the water.

we ventured our way over to the left of the falls and finally got a chance to dip into the waters.  not the same feeling as dipping into the adriatic sea but the water was cool and crystal clear.  you could clearly see your feet you can see and feel the mist spraying up from the massive amounts of water running over the edge of the falls.  one of those standout moments of this trip for me.  croatia just continues to deliver more and more

there was a small waterfall just beside us

this is going to seem like a creeper pic but as we were getting ready to leave, both j and i had wanted to take a few more shots of the falls since golden hour had hit and there weren’t any people in the water.  well, anyone except these two girls who had been taking pictures for literally 20 minutes.  selfies.  poses.  more selfies.  more poses.  20 freaking minutes.  we waited, waited and waited some more and i eventually snapped this one half assedly (no pun) and gave up on waiting >:( difficulties aside, we really enjoyed krka even though we only made it to 1/3rd of the park.  since that day, i’ve come across a number of collections that highlight all the amazing sights of croatia and it’s amazing that we’ve just barely scratched the surface.  from the national parks to the islands to the mountains to the cold water springs, croatia is breathtaking and krka is just the tip of the iceberg.