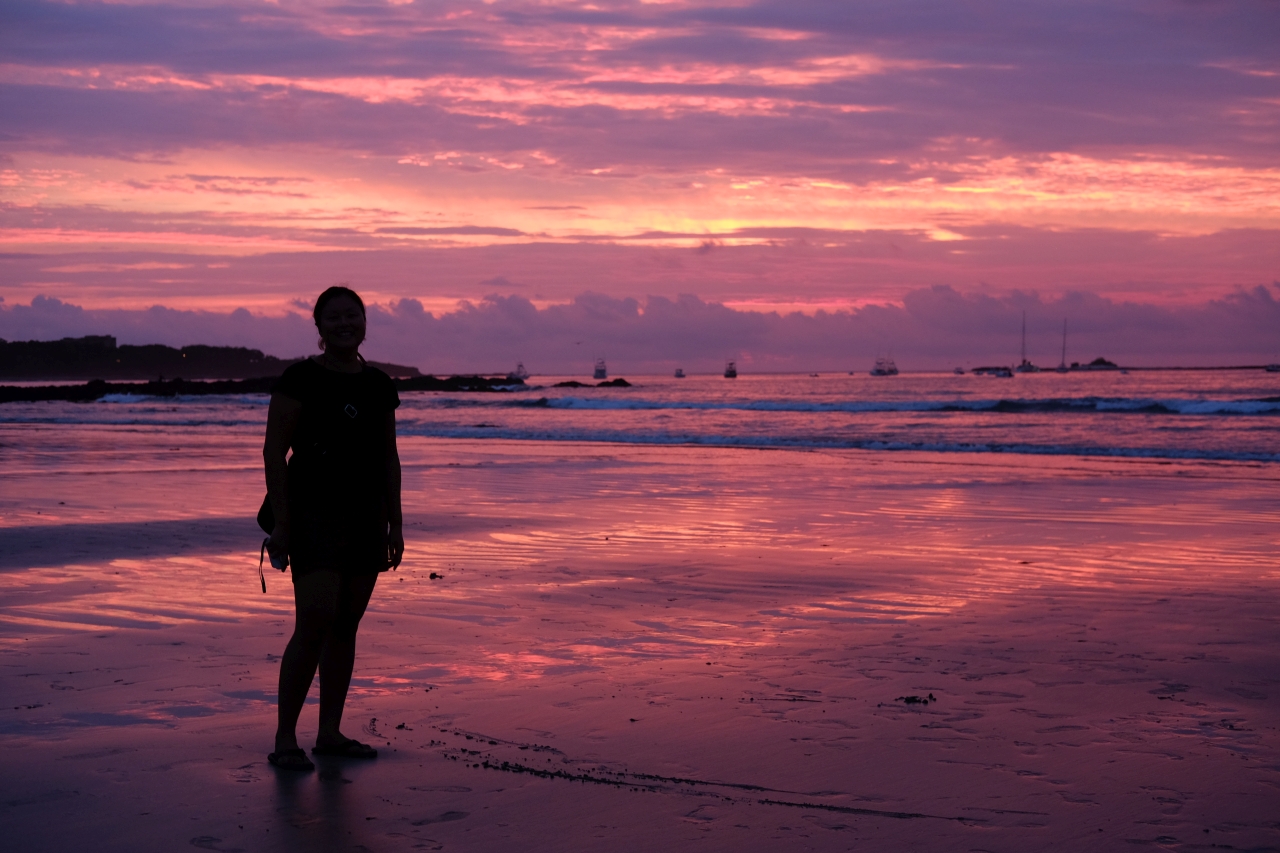 what do i like?
-huge beach – the beachfront of tamarindo seems to go on for miles. one end is connected to an estuary and the other wraps around forming a slight crescent. the sun sets on this end

-happy dogs everywhere – i don’t know why there are so many unattended dogs around here but it’s awesome. they’ll latch onto anybody and everybody and then move along the beach to the next person who’ll play with them. very heartwarming to see after our encounters with so many malnourished street dogs in guatemala and nicaragua.

-unbelievable sunsets – sure, we’re on a beach and every sunset is going to be great? not exactly. the afternoon was mostly overcast and we weren’t expecting to see the sun at all, especially with a forecast of heavy rain thanks to hurrican otto moving into our area on this evening. well, as they have been for 99% of this trip, the forecast was wrong and the sun peaked out for just over an hour, treating tamarindo to one of the most insane sunsets i’ve ever seen. everywhere you looked, pink hues were screaming across the sky. it looked like the clouds had just been set on fire and coupled with the low tide, were causing these pinks to bounce off of the beach as well. all you could see were silhouettes of the beachwalkers, surfers, boats and waves and it was nothing short of breathtaking. the more i write about something i’ve seen so often, the more critical i try to become in order to justify if it’s actually worth writing about. this was all that and more. it’s not everyday you end up in the path of a hurricane.

what do i dislike?
-so many bad tattoos – the overwhelming number of americans in tamarindo are singlehandedly inflating the number of ‘what was i thinking’ tattoos. beer bellies and tramp stamps outnumber the uninked bodies. i love ink when it’s original and artistic. i don’t like it when it’s done to fit in with other people who like ugly ink.

-horses on the beachfront – this means horseshit everywhere. in between the footprints in the sand and in your path to get to the water. why are there so many horses on the beach? well, to give rides to white families, of course. way to mess things up for everybody else you stupid c*nts. please stay in tamarindo.

-tamagringo – is what this town is known as. it is easily the most touristy location that we’ve been to this trip but between this and freezing our asses off in monteverde, i’ll put up with the gringos. there are lots of food options with a plethora of burgers and pizza but this doesn’t really affect us as we plan to indulge in some home cooking this week.

-the threat of crocodiles – there are signs near the estuary to beware of crocs and we walked past two of them without noticing them. we (well, i) considered walking across the estuary at low tide to get to playa grande which was deserted and that’s when we ran into a traveler who mentioned that a surfer got bit by a croc just a few months ago. what. the. hell. there have been many recountings of crocs swimming through the surfing lineup as well, to which surfers will yell ‘feet up!’ until it passes. insanity.

what do i like/dislike about the new accomodations?
-it took 6 weeks before we landed in a place where we could cook our own meals and this airbnb was a 10 minute walk from the beach down a quieter street. hot water, aircon, a kitchen, an ultra comfortable bed, no animals or music to be heard throughout the night and very accomodating hosts. did i mention how much i love airbnb?

biggest adjustments from the previous stop?
no more cold and wind. there might be clouds and rain in the forecast but we’re back to the boardshort and tanktop uniform and i’m more than happy with that. we’ve had our share of cold nights and even colder mornings (lake atitlan, earth lodge, monteverde) as well as perma-damp days (little corn) and we’re ready for the heat.

what was our first meal?
-chorizo pasta. nothing special but WE cooked it. we had a two element electric stovetop with one pot, one pan and a cutting board the size of a rice bowl but we made it happen. with over 100 meals since our last homecooked meal, we just wanted a simple meal that we could eat in the comfort of our own home and that’s just what we did. no overcooked meat. no horribly bland food. no beans. no plantains. no 45 minute wait to get cold food. we’ve ingested a lot of meals in restaurants this year but the draining part of eating out so much in the last six weeks is that not only are the options usually bad but they’re usually overpriced as well.

overall impressions?
-once in a while, the universe will throw you a bone and everything will work itself out. that bone for us was tamarindo. up until the day before we arrived, we were going to stay in the interior region of costa rica (arenal). however thanks to me being a big, old baby about the weather, we cancelled our shuttle and re-booked another one to take us to the pacific coast. we were also originally planning to spend out beach days on the carribean side of the country but thanks to hurricane otto rolling through this week, we scrapped that idea. costa rica has an insane number of beaches to pick from and since we didn’t have enough time to plan accordingly, we plopped ourselves in the middle of the guanacaste region. luckily we didn’t head north to playa flamingo which is just 30 minutes away because hurricane otto just touched that area. we’re counting our lucky stars. everything averages itself out in the end 🙂 as for the town itself, in spite of the grotesque number of american tourists, the beach in tamarindo is really chill and not the least bit obnoxious. there’s a mix of families, seniors and 20 year olds with the majority being of the older demographic. there’s lots of restaurants to choose from, pricing isn’t too crazy, beachfront is extremely wide and the waters are calm enough to swim in yet have enough waves for surfers of varying abilities. we’re really happy with our first day in tamarindo in spite of the hugely touristic feel of the town.