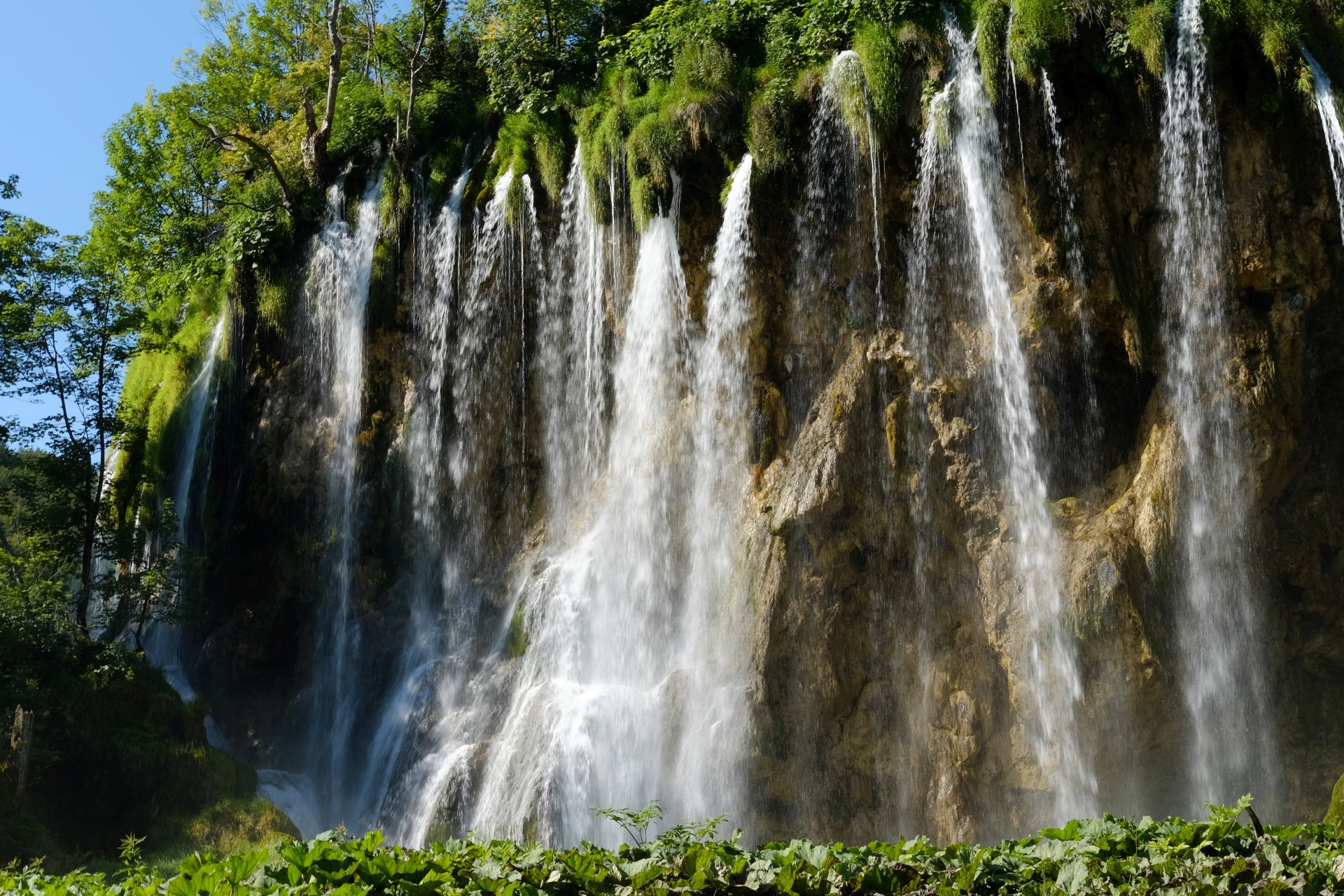 q. favourite meal
a. we took a wrong turn on our daytrip from porec to rovinj and passed a number of random restaurants on the side of a small ‘highway’.  on our way home we drove back the same way and the restaurant was completely packed and we had seen on outdoor kitchen complete with a rotisserie.  after checking out the menu, we ordered two of the house specialities: veal casserole & black truffle linguini.  the veal came as five big chunks about an inch thick, about the size of a t-bone steak and would fall apart as you stuck your fork into it.  the truffle linguini was fragrant, creamy and they were very generous on the shaved truffles.  those two, a side of risotto and two drinks came to 212 kuna (~$42 cad) all in.  we are DEFINITELY not in dubrovnik anymore 🙂  if there’s one thing i’ve learned to cherish this trip, it’s the detours and unplanned things.  they usually result in something memorable like this meal.

q. most memorable moment / best highlight
a. spending the better portion of a day taking in the sights in plitvice national parks.  the park has a seemingly endless number of waterfalls and a good infrastructure of walking trails built up.  as it’s a top attraction for daytrips from nearby cities, we opted to spend one night in the area so that we could get up bright and early to beat the rush.  i might not have appreciated it as much at 8am that next morning but by 11am i was quite happy with our decision.  standing around and staring at a small lake fed by 10 waterfalls is quite a sight and we had the pleasure of doing it in complete silence for most of the morning.

eventually we started to get carried away by the flow of the crowds but haha did her research and pathed us to an amazing lookout point that only 5 other had known about during the whole time we were there.  it’s actually the location where ‘the’ photo for the park was taken and involved some decrepit stairs, a dirt trail, an asphalt road and another dirt trail which popped us out here…

q. greatest challenge
a. keeping my energy level up.  between the driving and maybe my worst allergic reaction this trip, it’s been tough to stay on the go even though the days don’t consist of much.  i spent one full day in bed to try and nurse my throat back to normalcy but i could go with another day or three of vegging out to some game of thrones.  on that note…

q. what i miss most from home
a. my couch + tv + surround sound + game of thrones season 6.  while we’re dying to catch up on our favourite tv series (and the one that is filmed in many locations in croatia), our options on where we can watch this are:
a) my 6″ phone
b) haha’s 10″ tablet
c) my 13″ laptop
d) any of our airbnb’s extremely dated tvs (ie: 17″ lcd, 13″ crt (i have no idea where they dug this relic out from but it’s probably next to jimi hendrix and marilyn monroe), one airbnb didn’t even have a tv)
on the positive side, that 17″ lcd that we had in split did treat us to a full episode of alf in 360p quality.  and it wasn’t even in croatian.

q. next stop
a. zagreb, croatia (and away from a coastline for at least the next two weeks)

q. weirdest observation about current culture
a. i haven’t seen a single policeman over our first 10 days here.  not a single one.  we’ve been on the highway driving 140km/h and people will be flying past me like we’re standing still… and still, not a single police car.  they serve complimentary raki & grappa at the end of most meals here, thereby indirectly causing intoxicated driving.  but no roadblocks.  we chatted up an austrian who’s visited the country five times now and he seems to think that all policemen are at the office.  enjoying the air conditioning.

q. one tip i would give myself if i were to come back
a. budget another 2-3 weeks to get around croatia.  the country is breathtakingly beautiful and i want to see it all.  i had no idea that the country was made up of over 1000 islands although the definition of island is based on size so the majority of them are uninhabited.  couple those with rolling hills, mountain ranges and gorgeous national parks and it’s the type of place that you would never want to leave.

q. one random/weird/cool thing i learned about the country i’m staying in
a. the croatian definition of the word ‘beach’ is probably most accurately described as ‘any location that can access adriatic sea’.  forget about pebble beaches, many are made up of rocks, boulders and many are even just concrete jettys.  as for a gradual sloping entrance into the water, don’t count on that here.  the pebble beaches will have those but a large number of these croatian beaches are simply dropoffs into waters that require you to be a strong swimmer.  it’s killing me to be such a swimming noob at this point but it’s definitely going to motivate me to get off my ass, get my waterwings and come back here to do some drunken diving and swimming.

q. one new experience/memory that will stick with me
a. the whole driving experience throughout croatia.  i miss having the freedom of driving and going at our own pace and stopping to rest or to take pictures at our discretion.  also, being able to plan our own itineraries has helped a lot.  not all of it has been perfect though and looking back, i’m glad it happened that way.  getting lost in the winding streets of split and having countless ‘oh, turn back there!’ moments has made the trip a litte more interesting.  the roads in croatia are also amazing and are perfect for roadtripping between towns.  this might actually change how we spend the rest of summer as we may offset the car rental cost with cheaper accomodations in smaller towns.  who knows… we haven’t planned anything past the next two weeks as of yet.

q. portion of luggage that’s been the most & least useful
a. antihistamines.  thank god for the little ziploc of medical supplies that have *knock wood* been used very infrequently so far on this trip.  least useful: haven’t touched my second pair of shoes in weeks now (native apollos) as well as my sandals.  my rubber natives are getting fulltime duty for walking, hiking and as aquasocks.