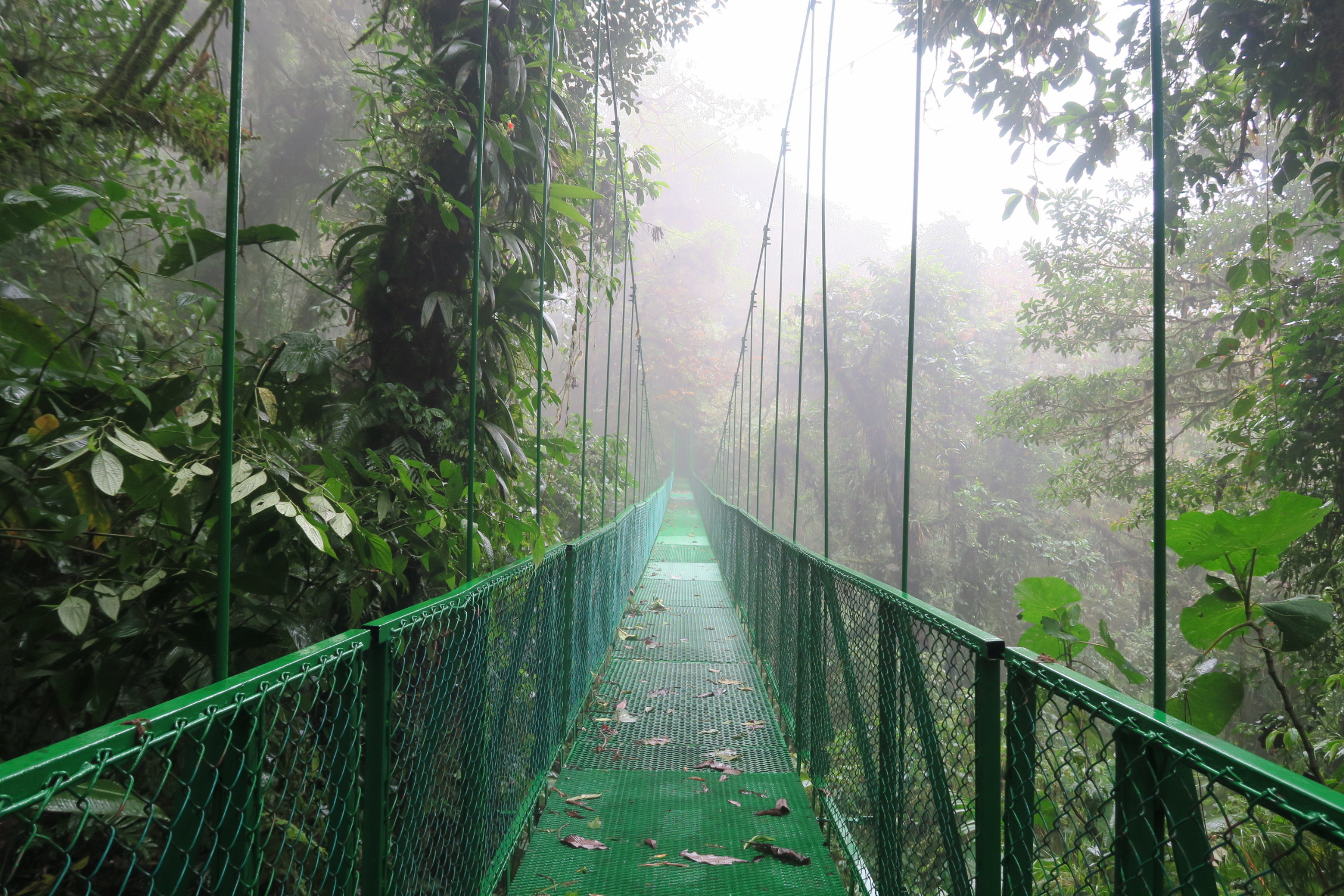 what do i like?
-cool, crisp air – it’s been a few weeks since we’ve experienced this. i hadn’t thought about it before this trip but apparently i’m not a good sleeper in humid conditions. as soon as the temperatures dropped, i was able to sleep through the night. sleeping with merino wool tights on is something i could do without though.
-lots of nature – it feels a little like home and a little like guatemala. that’s probably why i’m not as excited about being here as some of the other people in our bed & breakfast (case in point are the two asians from america who were out and about at every moment despite the crappy weather).  the creatures and critters have been a nice bonus too.  we saw a white-nosed coati which might be the second cutest thing i’ve seen next to red pandas in hokkaido

what do i dislike?
-the pricetag – costa rica is the most expensive country out of the three central american countries that we’re visiting and i have yet to feel like we’re getting additional value out of the higher cost. easier access to american fast food chains isn’t exactly my idea of ‘good value’.
-vancouver weather – we were greeted with howling winds and rain on the first day. it’s a little less humid here being nestled in the hills as opposed to at sea level but i’m not sure if that makes any difference to drying out clothes. everything that isn’t in a ziploc bag remains constantly damp.
-getting here – our shuttle driver must moonlight as a rally driver because he got us from san jose to monteverde nearly an hour faster than we were told even with a 15 minute rest stop. when i told him ‘you drive really well’ he smiled and had this evil grin cover his face. that was the good part. the bad part is when you realize you’re feeling nauseous 5 minutes into a three hour ride. hurky, jerky turns, potholes and an endless number of winding turns through mountain roads made that three hours feel like a day.

what do i like/dislike about the new accomodations?
-very comfortable place. our best sleep this whole trip since the air is crisp and we have… drumroll… a comforter to drape over ourselves with a fuzzy blanket to boot. standard bedding in nicaragua is a single thin sheet which feels like it might as well be rice paper. the common/eating area is open till all hours of the night and the video playlist are hits from the 80s and 90s which goes surprisingly well with rum & cokes.

biggest adjustments from the previous stop?
well we spent one night in managua which was warm and comfortable but in comparing to little corn, this miserable cold weather was actually an improvement. we were able to walk around town without any rain, we spent a day walking around a cloud forest in a nature reserve without getting soaked and the added bonus of being able to eat food that isn’t increasing my hive count or threatening my life is pretty awesome. with that said, i’m ready to leave.

what was our first meal?
soda la amistad, a small diner serving traditional costa rican fare. grilled meat served with plantains, beans and rice is the name of the game which isn’t too different from typical nicaraguan meals. at a pricepoint of 2500-4000 colones ($6-10cad), soda la amistad is definitely on the cheaper end of dining options here.

overall impressions?
-we’ve only spent one night in costa rica so this isn’t a huge sample size to draw from but i think this is going to be a sign of things to come. i can accept that some nations are more expensive to travel in but my issue isn’t with the pricetag but of the value that you’re getting. monteverde is just the very beginning of our three weeks in costa rica but it’s already shaping up to be closer to our budget in europe.  we just wrapped up a week on the rainy carribean island of little corn in nicaragua and to get tossed into that same weather here with high winds and chillier temperatures thanks to the elevation and i’m not exactly loving this decision of mine to venture out here. we spent a full day walking in the santa elena nature reserve as well as on selvatura’s network of hanging bridges to be able to view nature from an elevated perspective and i think i’m “nature’d” out for the moment. this weather mirrors the one season that crushes my will to live in vancouver. i can deal with rain. i can deal with cold. put them together and i question why it is that i’m spending vacation time in a foreign country in this same suicidal weather.