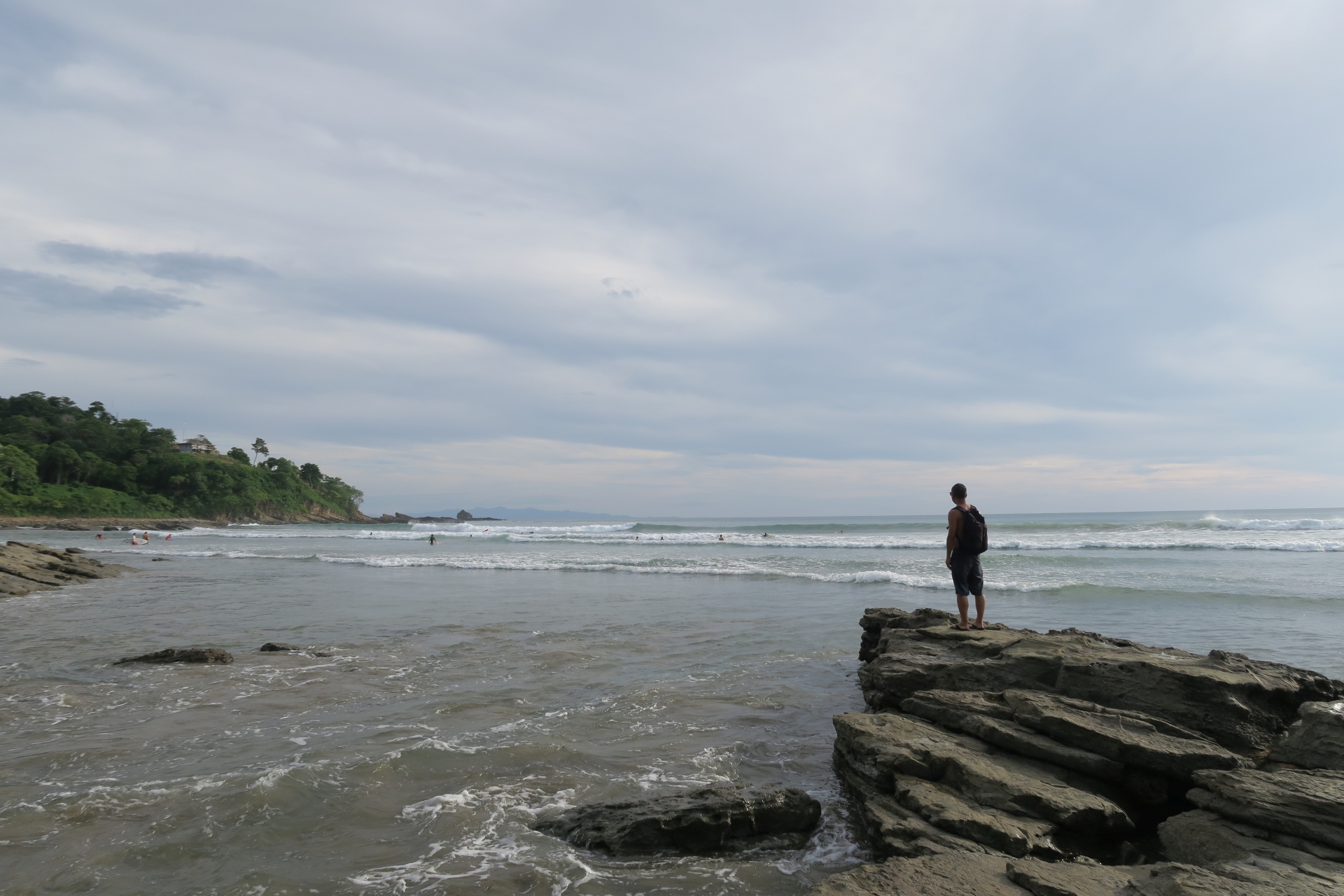 jojo:
what do i like?
-our first beach day since the netherlands almost 3 months ago and it didn’t disappoint. playa maderas is a small, quiet beach best known for surfing. the waves range in size but the beach is empty, sand is fine, water is warm and the landscape is made up of wave battered rocks, bright green leaves, blue skies and a horizon that seemingly stretches until infinity

-watching people surf – i’m tempted to sign up for a surf lesson however my swimming skills are still hovering betweeen ‘useless’ and ‘awful’. the waves in maderas seem to range from about a foot high to well overhead where people can ride the pipe/tunnel (i have no surf lingo, please excuse me) and it’s interesting to see that the breaks run a few hundred feet long so the waters can accomodate a good number of surfers. we spent our first afternoon hanging out on the beach until nearly sunset watching the local surfers carve up their waves and all i can say is that i want to be able to do THAT. SOON. it looks like a hell of a lot more work than snowboarding but each twist, dive and carve that these guys were throwing into the water reminded me of riding in japan’s endless powder stash this year. one could live here for two days for just the price of a lift ticket and best of all, it can be done when there’s no snow to miss. ahhh, dreams of what life could potentially become…

-quiet time. we’re in between the two beaches of marsella and maderas and san juan del sur is about a 15 minute shuttle ride away which keeps maderas very quiet in comparison. quiet and chill time is great. we had that on ometepe but this feels even more remote in a way. one dirt road is the only pathway into maderas

what do i dislike?
-not as cheap as expected – food is priced in american dollars which has kept to the standard of an average of $10-15cad per person per meal. granted, we are outside of the main town and the further one goes from civilization, the less options one has and they can afford to charge us whatever they want. this ties in with my next point…
-food options are boring – everywhere we go, we’ve found more restaurants serving western fare than those serving local cuisine. our eating experience in nicaragua has thus far been a bit of a let down. i can’t comprehend why hotels love to offer the same boring western menus. i would gladly pay the same price for nica food instead of committing dining suicide on the world’s worst pasta.
-random noises & bugs – it took about a month but the mosquitos have finally decided to notice that i’m down here. i’ve also found it impossible to sleep in much later than 5am thanks to some insane noises here. between an angry/whiney/horny cat that seemed to want the world to hear him to the pack of howler monkeys screeching away every morning, getting a good night’s sleep is challenging. thankfully, the rest of the day has entailed sleeping on a beach so this hasn’t been a huge issue.
-some of the people – bad apples exist, i get it. we’ve had the pleasure of crossing paths with some people here (couples and bigger groups) that are f*cking douchebags. i’m not talking about the surfers. i’m talking about the entitled group of (young) tourists that expect people to cater to their every need because things aren’t as how they’d expect it to be back in whatever small town they’re from. as for couples, being cordial with others seems like too much to ask. hardly anybody shares a smile as you pass them which has been a bit of a shock for me. i can start a conversation someone in spanish easier than another traveler… what’s up with that?

what do i like/dislike about the new accomodations?
-after coming from a string of very hospitable places, our reception to casa maderas was quite cold in comparison. at $62cad/night, this is pretty close to our budget, we have a pool, a private bathroom and a security guard manning the gate 24 hours a day (i’ve learned to not take this for granted). the owner didn’t seem particularly helpful or personable when we had questions about the facilities and surrounding area but i did notice that she was french and we typically haven’t had many ‘warm’ runins with the french. wifi has also been nonexistent; frustrating as we were planning to use our downtime to catch up with blogging. thank the sweet lord that we got all of our planning for the next two weeks over and done with while on ometepe!

*important to note that we originally wanted to stay where our friends had volunteered, at a boutique hotel called hula kai. their eco pod units would have cost about double the price at 100usd/night but we were willing to splurge for this portion of the trip. timing unfortunately ddin’t work out as their booking agent was traveling and didn’t get our emails in time. hopefully we can stop by to check out the hotel but this is a glimpse of what it would’ve been like:

-much, much warmer and humid than ometepe. our beach day has been long overdue. we had expected to be have been able to get into the water at many prior stops but the water quality hasn’t been particularly great. lago atitlan was overrun by a mysterious algae growth a few years ago and people warned to not swim in it or to swim with earplugs on and a closed mouth. lake cocilba next to granada was absolutely filthy and green. the water surrounding ometepe is part of the same lake however it did look cleaner but because we’re on shoulder season, the cleaning crew must still be on vacation as there were bits of garbage lining the shoreline. now that we’re next to the ocean, order has been restored and we’re just kicking back a little after many taxi, bus and shuttle rides.

what was our first meal?
-a shack called ‘tacos locos’ down by the water of playa maderas. there were three restaurants to choose from and one was still closed until high season. i had two beef chalupas and it was nice to get something with some spice again. we haven’t had any spicy food since our last week in guatemala; finally the salsa has bite again. at 9usd, this wasn’t a cheap nor authentic meal so i’ll reiterate again that i’ve been disappointed with the food in nicaragua thus far. for the sake of comparison, i could’ve had 15 better tasting tacos in antigua, the most expensive city in guatemala, for the same price.

overall impressions?
i’m digging playa maderas in the biggest way. i haven’t been to a whole lot of beach vacations and this is the first time i’ve seen surfing up close and personal (hawaii’s north shore doesn’t count as the surfers there are godly and are a completely inaccurate representation of what 99.99% of surfers in the world look like) and i’m dying to get on a board. being back on a fine sand beach with warm water is also amazing and a welcome break from our three weeks of inland travel. coming to the pacific side of the country wasn’t even on our radar as the nearby town of san juan del sur is known to be a party destination for university students. we met three people at earth lodge in guatemala that volunteered and lived in playa maderas for three months earlier this year and they had nothing but good things to say about it. i’m so happy that we took their advice and made it to paradise. this stop has singlehandled turned around my experience in nicaragua thus far.