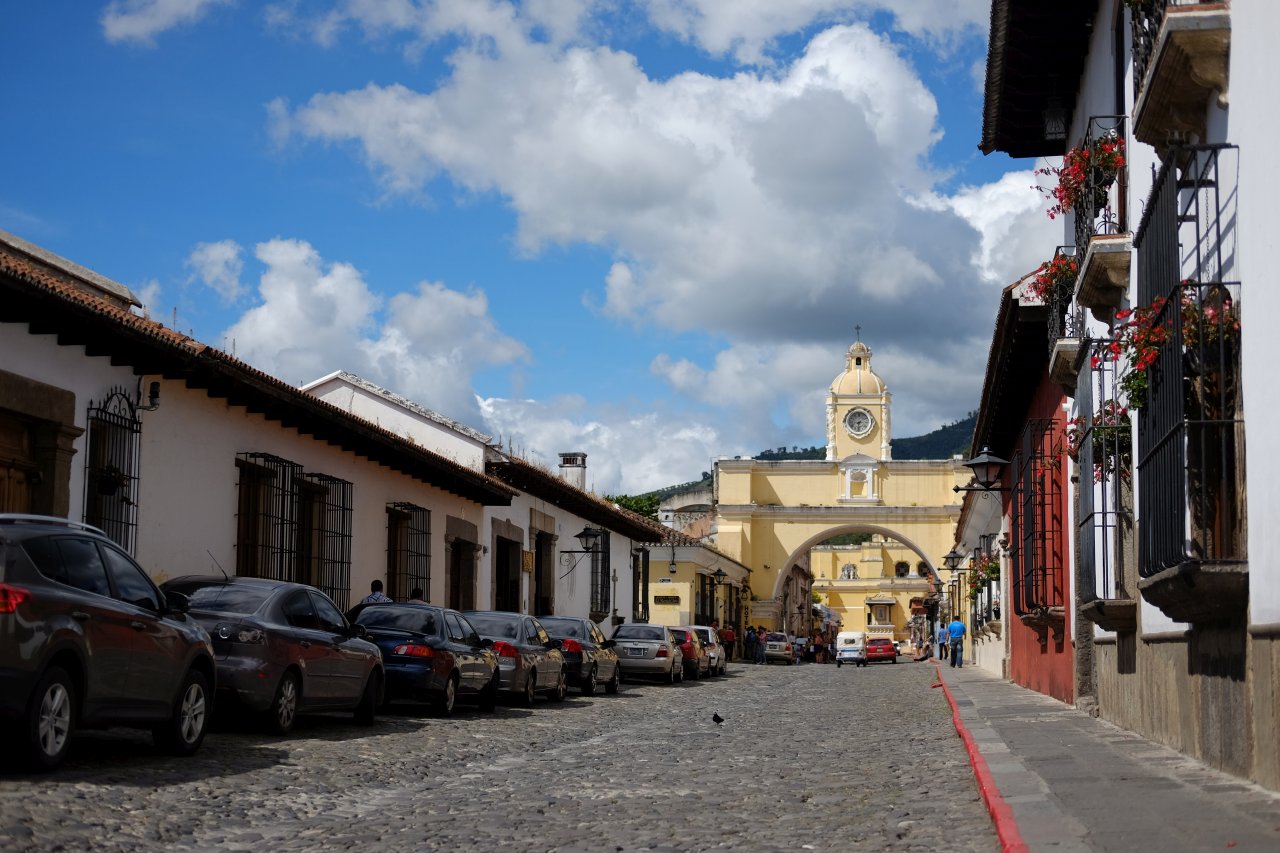 jojo:
what do i like?
-food!  tasty and cheap are a perfect combo in my book.  while my stomach isn’t as bulletproof as i’d like it to be, this trip is going to be a training mission whether it likes it or not.  in our first day we’ve eaten el salvadorean and mexican and have yet to stuff any guatemalan food down our throats but that time will come soon enough
-antigua is a unesco heritage site and it may be the first one that i’ve seen that isn’t polished up.  the cobblestone roads are closer to a firepit than portugal’s and automatic-weapon toting policemen are on virtually every block.  in spite of all that, the city still feels very quaint as it’s nestled in between three huge volcanos and is home to roughly only 40,000 people.
-very small and walkable city.  tuktuks are the public transportation of choice though it only takes 10-15 minutes to walk from one end to the other.

what do i dislike?
-the mix of the western world into a town as historic as this.  antigua was founded in 1543 and has turned into a major destination in the country and down a few streets, the storefronts are touting the same storefronts as you’d see in the north america; mcdonald’s, burger king, little caesars and office depot to name a few.  i haven’t seen a taco bell here yet but after seeing ads in guatemala city, it’s probably just a matter of time.
-reviews on the safety of the city/country has been mixed.  petty crime has turned up often during our research on guatemala and while it looks safe, i can’t help but be a little guarded
-having to do math again to figure out how much we’re spending!
-the popularity of the us dollar.  it’s convenient that everybody will accept usd but when bargaining, on top of being originally offered the gringo price, make sure that it’s not also quoted in usd (ie: 5x the price in guatemalan quetzal)!

what do i like/dislike about the new accomodations?
-well, the shower doesn’t leak, the toilet flushes properly and the hot water is freaking scalding hot.  the bed is firm (perfect for me, horrible for haha) and while it’s closer in size to japanese rooms rather than european, it’s pretty awesome!  we also have a cute little courtyard which i’m sure is the case with most other places we’ll be staying at this trip.  loving it so far.

biggest adjustments from the previous stop?
-everything about central america feels different from europe, asia and north america.  the people, the food, the transportation, the landscape.  about the only thing that is similar is the traffic but the driving here is slight more aggressive than i’ve ever seen anywhere else.  case in point: our shuttle from guatemala city to antigua was racing around a bend uphill while tailgating a car at roughly 1-2 feet away all while climbing in speeds to over 100km/h

what was our first meal?
pupusas!  they’re not exactly guatemalan but instead salvadorean but we wanted something that we couldn’t readily get back home.  fried tortilla stuffed with mushrooms, chorizo, chicharones and cheese and topped with a vinegar slaw and salsa, all made to order.  not bad for 30 quetzales ($5.50 cad)!

overall impressions?
a mixed bag so far.  i’m not in love with antigua yet but i’m starting to come around.  i think that my opinions thus far are also influenced by being off the road for a while as well as never having been to south or central america plus our travel day to get here didn’t exactly go smoothly with a redeye flight and a 4 hour layover in mexico city at 630am.  so our first day in antigua was a bit of a mess but things should be on the up and up!

Antigua is pretty, lots of colourful buildings, a nice main plaza/park and the city being surrounded by vulcanos. I am very impressed by how clean the streets are. I see litter pickers working the streets and it’s a job well done!

I am not sure how much I will like the public toilet situation here. The one at the airport did not have a seat cover. I’ve been using the hotel toilet since I’ve arrived in Antigua. I’m dreading the day (likely soon) when my stomach meets a food item it will not be happy with and when that time comes…I’ll be very afraid.

The hotel is great. Very clean and quiet. The credit card machine didn’t take any of our credit cards so we has to go find an atm to pay in cash. Hopefully we won’t have to keep doing that but I have a feeling this will be a Guatemala thing.

Since we are coming from Vancouver, it’s  a huge adjustment. Having to negotiate payment beforehand for everything is frustrating. We will be paying cash most of the time and I miss being able to just tap my credit card to pay. So spoiled.

Pupusas are gooood! I had leek, chicharron, jalapeño and cheese in mine. Super filling and I loved the spicy pickled veggie side. Muy  picante!

I was pleasantly surprised by how easy it was to get the shuttle bus from Guatemala City to Antigua. There is only one kiosk selling shuttle tickets to Antigua inside the bus terminal. The cost is $12 USD or 80 GTQ per person. The driver met us at the door and after 5 minutes we were on our way. There were 5 passengers including ourselves and each were dropped off at our own hotels. I was expecting the chaos I experienced in Costa Rica but it was not like that at all. Maybe things are different now in Central America…we will find out soon enough.