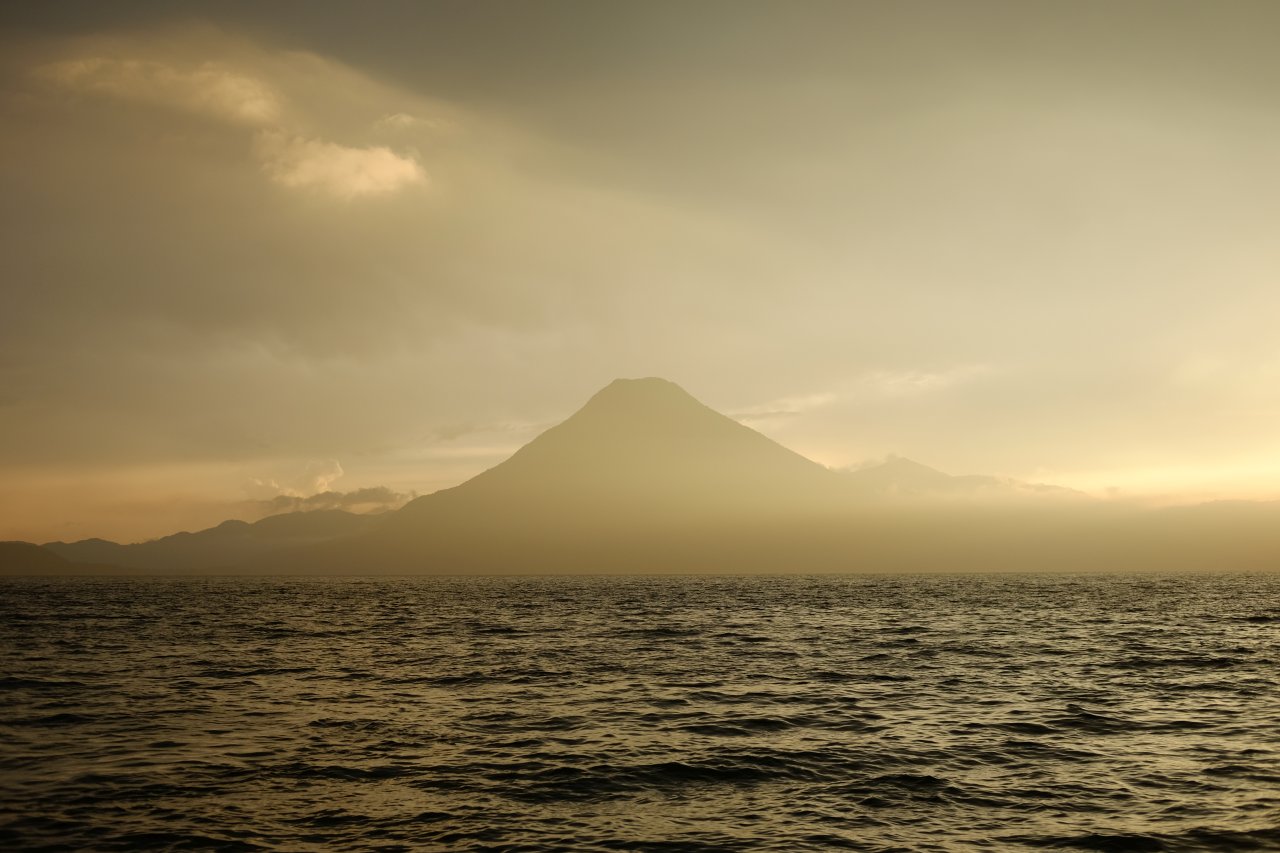 jojo:
what do i like?
-one seriously boss sunset.  vancouver has the northshore mountains, santorini has hillside villages, albania had empty beaches but panajachel’s is something else. three volcanos (atitlan, pedro and toliman), virtually no boats and constantly moving clouds so the visuals and lighting change from minute to minute.  amazing.  we previously read that lake atitlan is considered one of the most beautiful lakes in the world and i’m a believer.
-panajachel is the biggest, relatively speaking, of all the villages around lake atitlan but also has the most number of stores, food options and daytrips generally run out of here as well.  anything you need is very accessible since it’s so small
-the restaurants seem about 20% cheaper than those in antigua, roughly estimating
-bargaining for deals.  i wish we had room to buy stuff as we’ve seen loads of cool things woven in traditional mayan patterns but for now we’re getting by with haggling for buses (which looks to be making up 100% of our travels over these three weeks in guatemala)
-feeling like a giant.  ok maybe not that far but definitely above-average height.  mayans aren’t tall individuals and i can actually see about 10 feet down in a crowd here.

what do i dislike?
-things can get a bit hectic here.  from the barking dogs to the crowing roosters to the bustling main drag, the noise is pretty constant throughout the day and then it gets really quite once the sun goes down
-the air quality doesn’t feel like you’re next to a lake but instead in the middle of a southeast asian city.  lots of tuktuks and shuttles are roaming around town in search of their next fare.
-my laptop is going through a tempermental phase.  wifi doesn’t work on it though our phones and tablet are perfectly fine and my hard drive is starting to show failure reports.  the second major piece of electronics that i’ve bought this year that is needing a warranty servicing.  grrr…

what do i like/dislike about the new accomodations?
-this place is more in line with how i felt our guatemala accomodations would turn out.  quite rustic, lots of mayan influence with the carved wooden furniture, a gated entrance down a dimly lit alleyway with two huge german shepherds standing watch (usually).  we have a balcony suite and two windows are facing a courtyard stocked with all sorts of flowers.  and then the window behind our bed is facing a half built second floor unit which looks like it’s been in the ‘halted’ phase for an undetermined amount of time.  concrete bricks and rebar are painting the landscape in front of that window that will not latch itself into the locked position (side note: we read up on reviews that some visitors here have had belongings stolen from the room) so we improvised and are using one of our travel locks on the window.  the joys of traveling to developing nations.

biggest adjustments from the previous stop?
-lake atitlan and it’s many villages couldn’t be further from the vibe of antigua’s.  virtually no polish on the town, lots of traffic down the two main yet narrow streets and lots of street food carts mixed in among the seemingly endless number of souvenir stands.
-we started to notice this in antigua but the restaurants here looks like they’re deserted in most instances.  we walked out for dinner around 7pm on our first night in and the first six or so places we walked by had nobody in them.  a complete ghost town.  it could be shoulder season or perhaps just that it’s guatemala.

what was our first meal?
-taqueria mucho.  the mexican bender continues.  we walked 15 minutes which is almost as long as you can walk before leaving the town and found it just as we were about to turn around.  i feel like we’re in a bargaining session to see how cheap we can eat before we get sick and so far, so good.  our first taco meal worked out to 8.75 quetzales ($1.50cad) each, the second came to 5q each and this hole in the wall was 3.33q!  it was better than the second place and probably on par with the first though the salsas and fixings were much better in antigua.  this was just a snack so we ended up with 3 al pastor gringas (fried tortilla wraps), 3 mixtos/mixed meat tacos and 3 chorizo tacos.  grand total of 50q since the gringas set us back a hefty 20q.

overall impressions?
-i started to get a little down on our place on the first night, thinking that we should’ve stayed at a smaller village across the lake but after having done a daytrip to the nearby town of chichicastenango for the biggest weekly market in guatemala, i’m appreciating the perks of being where we’re situated.  our next two days will be spent exploring the villages scattered around the lake, if weather permits, and i’m really digging the vibe here.  guatemala is starting to remind me a lot of the philippines; the mayans are super friendly people as were the filipinos and you can really sense it around them even if they, oddly, don’t smile a lot.  i also have a pretty bad history of traveling via bus and it feels good to taking the first steps to overcome that issue.  of course, it’s only progress until i vomit uncontrollably.

haha:
what do i like?
Panajachel definitely has the more authentic Mayan/Central American vibe. The streets are dusty, lots of street dogs and rustic restaurants. Antigua felt too clean up to me now that we have something to compare. The town is very small, very walkable with only two main streets. So far, the weather has been pretty decent. Warm during the day with cool evenings. We can sleep at night with the windows closed which is necessary to keep the bugs out.

what do i dislike?
The ride into Panajachel was pretty hectic. Our bags were dumped on the roof rack without ropes to tie them down initially and I had images of our bags flying off the roof over one of the many speed bumps Guatemalan government loves so much here. Eventually, the driver tied them down after he managed to fill the bus before leaving Antigua. It was about a 3-hour ride and my bladder was ready to burst as we approached Panajachel. At that point, our driver decided to show us the view of the town from the winding mountain road every time we were able to glimpse the town through the trees. He stops in the middle of a one lane road, completely ignoring the fact that there are other cars behind him. Of course the passengers are in a frenzy taking photos of the view which was not really that magnificent due to grey clouds obscuring the scenery. All this time, I am trying my hardest not to think about the possibility of peeing in my pants. When we stopped next to a waterfall, I was further challenged by the sound of trickling water.

what do i like/dislike about the new accomodations?
The place is very rustic and there are lots of lush plants and flowers around. All this lush green means that there are lots of bugs. Since our arrival, I’ve managed to slay a giant spider, several mini spiders and an enormous flying cockeroach. My flip flops make great weapons for bug slaying.

biggest adjustments from the previous stop?
I miss the cleaniness of Antigua. Most of the time, there are no sidewalks so we are competing for street space with cars, tuk tuks and vendors. Jojo and I are still getting used to walking the dark streets of Guatemala without injuring ourselves. We’ve tripped over our fair share of potholes by now.

what was our first meal?
We had tacos for a snack, then a pretty filling dessert on our way to dinner. By the time we finally got hungry enough for dinner, I only had room for some chicken soup.

overall impressions?
Panajachel is pretty noisy and dirty but somehow I don’t hate it. It feels like a real Central American town to me because of its griminess. At the same time, there are enough gringo establishments that serve fancy coffees and vegan fare to keep it from being too foreign.

what to eat in panajachel: the cheap, the dirty and the rest