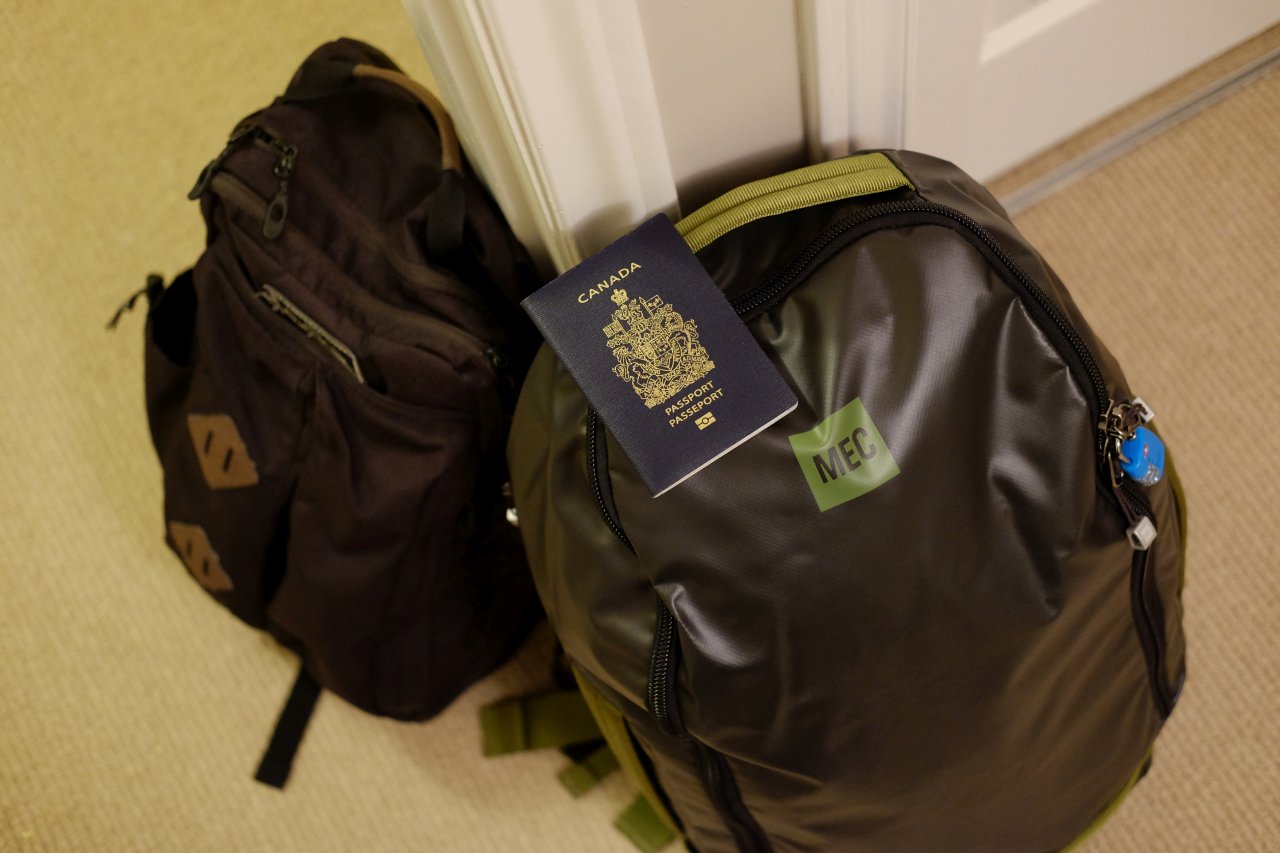 well it’s been 3/4 of a year since the last time i packed my bags from home and while the process is the same, the nuances feel considerably different.  looking back to what i packed for hokkaido, japan sends a shock through me.  i’m both impressed and amused at my thought process that lead me to that combination of clothing and supplies.  i’m surprised that i properly rationed out enough clothes for the summer months but i how i severely underpacked for the two months of blistering winter conditions in japan.  in my own defence, my winter wardrobe is nearly nonexistent except for on-mountain gear so i couldn’t have brought much to fill that void anyways… yet i tried.

during my final moments at home on the night of my january departure, i grabbed an additional backpack and stuffed it with whatever thick clothing i could find at the time… for fear of underpacking.  i panicked and my punishment was to lug around that backpack in addition to a carry on, backpack of electronics and 40 lbs of snowboard gear.  the novelty of having a safety net of clothing wore off after a mere three weeks and i ended up throwing out said bag in asahikawa.

fast forward nine months and we’re in the process of packing our bags for our next trip.  we’ll be on the road for two months in central america; guatemala, nicaragua and costa rica.  it’s shoulder season at the moment which unfortunately means that the rainy season is still upon us and packing accordingly feels just as challenging even after some experience with traveling light.  the difference this time around is that we’re going the backpacking route.  no, we’re not doing the hardcore, 50+ liter packs with the camping and $2 hostel stays but having said that, this IS the first trip for both of us where we’ll be living out of just a backpack for longer than a week.  space goes amazingly fast no matter how we cut it.

i’ve read countless stories on how one can live for a month or two with a mere 25L pack but the truth of the matter is that i value my electronics too much to shrink my pack down that much.  i’ve hummed and hawed about bringing a smaller point and shoot camera on this trip instead of my mirrorless fuji and i’ve decided to put up with the extra bulk for the perk of having a little more control over my pictures.  i was also really hoping to have been able to bring a tripod down with us as well but that’s the compromise.  having a laptop also outweighs the cons of having to do all media organization, researching and blogging on my phone.  i’ll be using my phone as a free ereader thanks to our public libraries to avoid carrying paperback books.  i will also be bringing this godforsaken gopro camera along after days of deliberation.  maybe i’ll find more use for it this time around!

phone – map, music, movies & ereader
laptop – research & blogging
camera – fuji x-t10 w/ 35mm prime lens
gopro – pictures & videos that i never end up looking at
chargers & cables – a necessity to use the above items
power bank – emergency power during outages
headlamp – for peeing in the dark
shaver – to upkeep my trendy hairdo
external drive – you can never have too many backups
i will say that i’m wary about bringing so many electronics but i can’t bring myself to compress it down any further than this.  i had considered bringing multiple memory cards instead of the laptop & backup drive but i’m a freak about having backups.. and the laptop gets my stuff to an external drive as well as the cloud (which in turn gets it to my home computer and onto yet another backup drive).

as for my clothes, this list hasn’t changed much.  these are more or less the same things i wore for the last four months of our previous trip with the exception of a few more warm-weather items that i tossed in.

in addition to the above, i also have a few ziploc bags to separate my miscellaneous items:

medications:
-allergy pills
-2 epipens
-diarrhea medication – fully expecting to be using these
-muscle relaxants – for pulled backs
-pain killers
-bandages
-polysporin
-iodine – i have a knack for hurting myself on beach vacations

and extra contacts plus a money belt thrown in for good measure.  i haven’t used one before but i figure it’s good to be prepared.

fully loaded, the bag isn’t bursting at the seams and weighs roughly 20 lbs (for 35L).

my original goal was to fit everything into my larger pack with my 24L daypack inside of it.  i ended up it up this way and most of the smaller pack is empty; it’s only carrying my camera, liquids, laptops and a jacket which would make things easier to get through at the airports.

and that just about does it.  i have to commend those people who survive on even less and i think i’m starting to get a taste of ‘the game’ now in terms of how light i can get my pack.  it’s kinda interesting to look back to see what i had packed back in january and how much i was able to trim it down by.  the next goal of mine is to let go of the electronics…