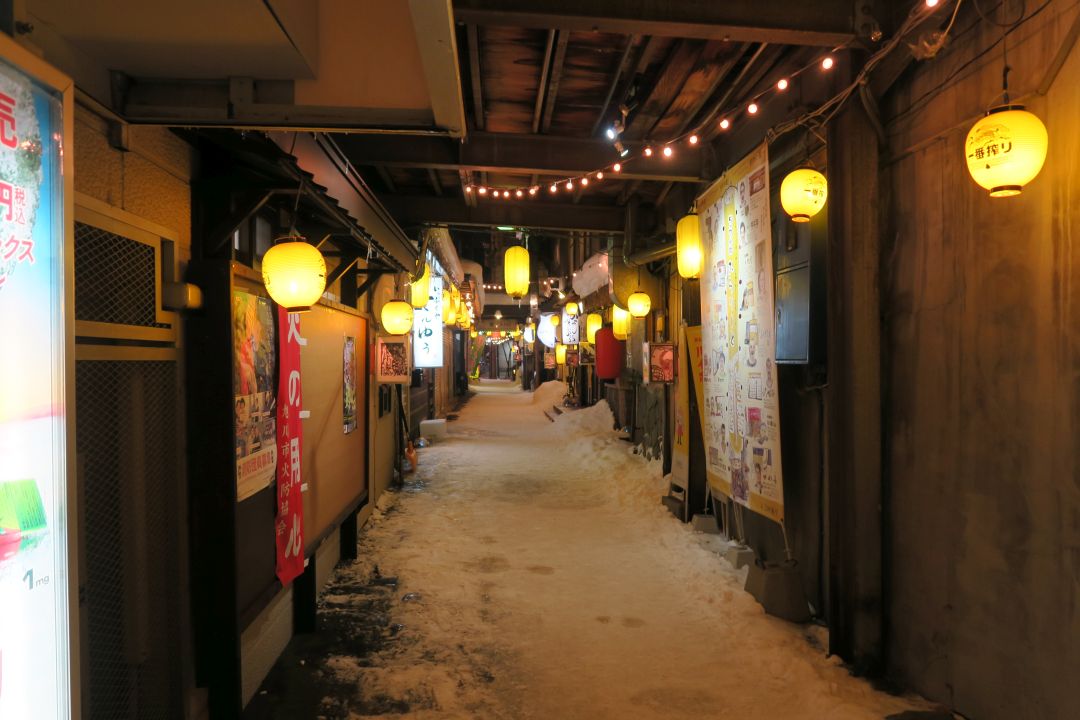 when did we visit and for how long?
late february for 10 days

what kind of accommodations?
two hotels.  we barely stayed in the first one for 30 minutes because it was so disgusting.  smoke was seeping out of everything, even the toilet paper.  we moved down the street to the washington hotel and it was squeaky clean although a little smaller.

what made us decide to visit?
for a taste of that northern hokkaido powder; lighter and in larger quantities.  instead we got one day of heavy, wet snow after a weekend of torrential downpours.  lucky us though, we did get a blizzard in the city!

what characteristics did I like about the city?
i liked that many locals did not speak english which made it feel a little more authentic.  the majority of restaurants also had japanese-only menus.  it was a double edged sword because ordering was quite tricky.  it was probably the most authentic foreign experience i’ve had in japan since my first trip to nara/osaka/kyoto in 2000.   i also liked that the city was quite small and compact which made it easy to get around especially with such heavy wind and snowfall during our stay.

what were my favourite meals?
-baikoken ramen – their bowl gave me a new appreciation for shoyu ramen!

-santouka ramen – exactly the same as the santouka in vancouver.  the broth was every bit as rich (and salty) as in canada which is a testament to their quality control.

-tempura mochi – wrapped in bacon.  man.  this is what smiles are made of
-sempre pizza – our comfort meals as a reprieve from the fierce winds.  for 400-700yen ($4-7 cad), you could get your pick of over 20 japanese-style thin crust pizzas.  cheap, fast and surprisingly good though it’s japan… what isn’t?  we went back three times!

-soup curry – born on the island of hokkaido, both of us instantly fell in love with soup curry.  i was expecting a watered down version of the japanese curry that is served with katsu and i was pleasantly surprised when that wasn’t the case.  a runny, spicy, well seasoned bowl of curry that can be customized with many levels (up to 30 in some cases!) of spice and meat/vegetables and served with a side of white rice.  pair this meal with a day of snowboarding and it’s nothing but smiles

–love love sands – while i spent my days napping on two  hour bus rides to and from ski hills, haha bundled up and hibernated from the elements with a stockpile of these

what were my favourite moments?
checking out the snow festival at the nearby park.  it was of epic proportions, they even had the army come in to help build the snow castle.  the city was also overrun by little snowmen, women and kitties.  so very japanese:

the ice sculptures scattered around town were equally as impressive.  so intricate and loaded with detail.

were there any moments i could have done without?
-walking across town after a rainstorm that left the leftover snow glazed with a sheet of ice.  sketchy times.
-living off the food at aeon mall which although good, got very repetitive and depressing.

-visiting the asahikawa zoo.  while we were able to spend some time with the red pandas (collective ‘awwwwwwwwww’… soooo cute), we also endured horrific crowds, many of them being mainland chinese tourists who simply did not have any respect for fellow visitors and animals alike.   i’m not one for supporting caged animals and this visit had possibly put me off of zoos for the rest of my life.  rip harambe.

what are the biggest differences from home?
-asahikawa sees nearly 300 inches of snowfall per year, one of the highest in the world at roughly 360ft above sea level.  so that’s a little different.  snow and ice everywhere and the winds to match.  to say it was cold would be stating the obvious.  i’ve been up at the top of whistler with the winds howling at 80km/h and while i was freezing my ass off there, i can honestly say that it was still not as cold as being in the city of asahikawa.

would I visit again?  why/why not?
yes but for a shorter stint and we would need a car to venture off to the mountains (asahidake & backcountry) that i’d like to be riding next time.  i would only go back with a group of friends in search of powder and only after we’ve dipped our boards into some western hokkaido powder.

was the full stay similar to our first 24 hours?
no, things went south after the first 24 hours.  the more restaurants we attempted the find, the more we found were closed or nonexistent.  we arrived when it was sunny and clear and that was one of a handful of times that we were able to see the sun.  attempting to transit around the city wasn’t very simple as the bus lines were a mess and hard to navigate since the schedules weren’t readily available either in the station or online.  my two daytrips to the nearby ski hills of kamui and furano were both letdowns as conditions were less than ideal (high avalanche danger thanks to inconsistent temperature and precipitation over a few days) due to their limited terrain.

rate my overall experience
i didn’t love my time in asahikawa.  we went there with a purpose and for reasons outside of our control, i only got a taste of what two mountains offered, those being kamui ski links and furano.  furano was the biggest draw for me at the time and it was underwhelming.  almost everywhere i rode this season was had better terrain, was cheaper and had easier accessibility.  the food in asahikawa was ok but we didn’t have any jawdropping meals.  the city is also quite small not that much exploring gets done by sane people in -20 degrees celsius.  sorry asahikawa, i wish things could’ve been different.

from asahikawa to furano in search of the great dump