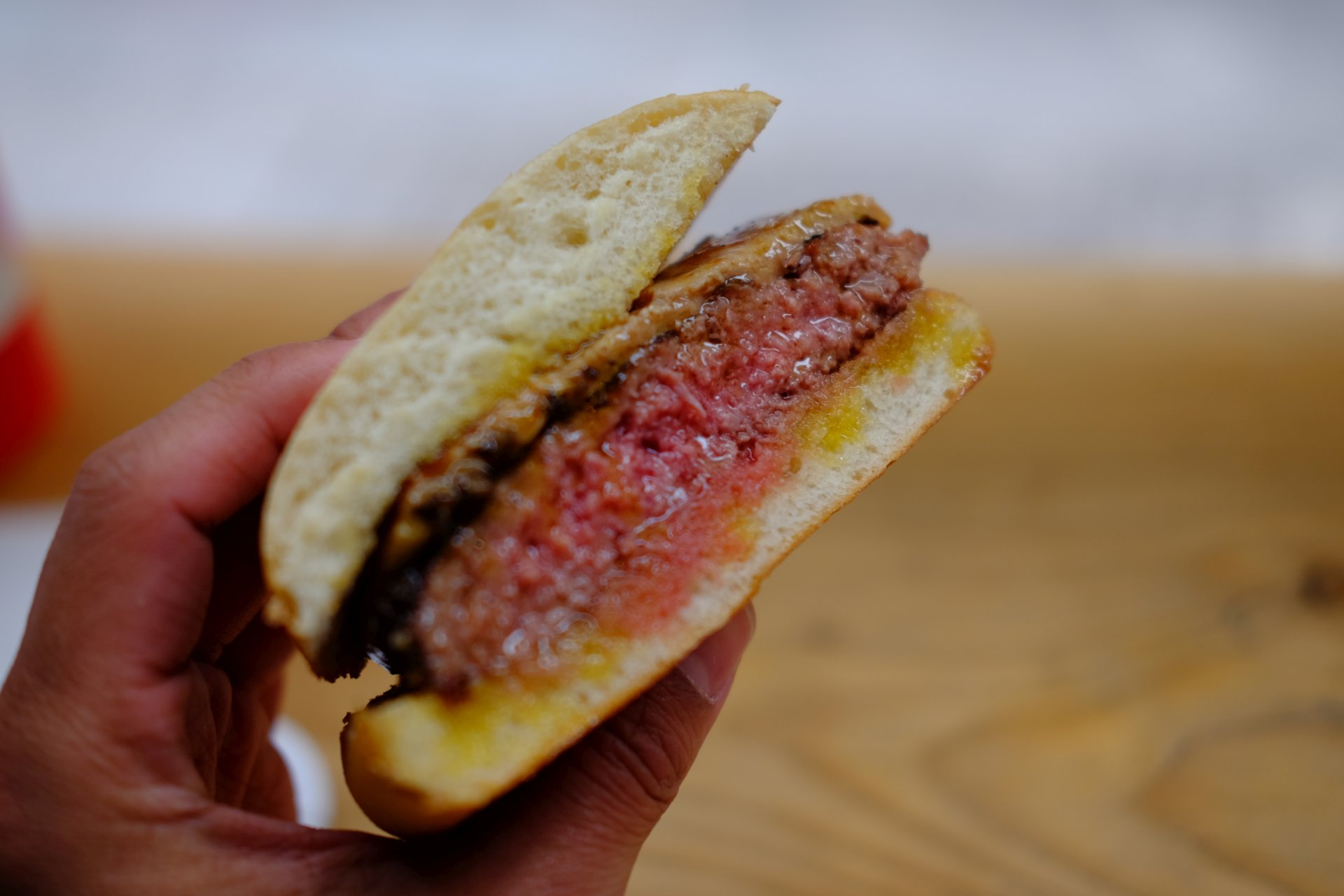 before leaving vancouver, my longtime friend/boss took me out for one final hurrah and we ended up at the pourhouse to get a burger done ‘just right’.  no frills, no toppings, just a medium rare burger on a bun with my favourite mix of beef, bun and blood.  with that said, it’s pretty easy to figure out that i’ve been craving that flavour especially after walking past hundreds of burger restaurants.

during my search for some madrid eats, i came across a stall called ‘the gancho burger’.  i don’t know what it is that made me follow up on it but i’m so glad i did.  they offer beef, turkey and… veal.  i really need to get out that cave i’ve been in my whole life because i’ve never had veal in any other form other than on a plate to be eaten with a fork and knife.  not only is it a veal burger but they will cook it medium rare and top it with black truffles and foie gras.  GAME.  ON.

we searched out mercado san il defonso, one of the newer ‘markets’ in madrid that is really more of a glorified food court that serves trendier food than your run of the mill fast food chains.  (with that said, the stall next to gancho burger was selling 3 euro tacos.  SHAME ON YOU, MAAM)

so we arrive at around noon and after some contemplating of how many to order, haha and i decide to share one burger.  we order it medium rare and order a ‘bucket’ of onion rings on the side.  i didn’t know how big this bucket was going to be since i’ve never heard of traditional onions rings being served that way and what we got was a home run.

the onion rings came in a small bucket and were literally onion ‘rings’.  droopy in texture with a very, very thin layer of batter coating them.  served with a sweet chili sauce, the salty/crispy/soggy/spicy/sweet combination is something i’ll remember for years to come as i highly doubt i’d ever attempt to recreate these by deepfrying them at home.  actually… hmmmm….  we were given long toothpicks to eat them but after fumbling around and having onion rings drop all over our tray, we decided to convert them into chopsticks (still thicker than the ridiculously thin korean versions) and continued shoveling them into our mouths as we waited for our burger.  speaking of which… mr gancho called me over when we were done and i just about lost my mind when i caught a whiff of the aromas coming from my paper plate.

i could see our burger bleeding slightly on one side of the bun and on the other side, a glisten looked back at me as i caught sight of some truffle oil beading down from the top of the burger onto the bottom bun.  he sliced it in half for us, presumably to ensure that both of us were not getting robbed of our 50% share of the upcoming yums.

once i had my first bite, this shot past every burger i’ve had with the exception of pourhouse’s creation.  i’d actually have to put them side by side only because i don’t feel like veal should be compared to older cattle; either that or i just don’t want to knock either down a peg.  make no mistake, this was one serious burger and the mix of foie gras and black truffle is a match made in heaven.  the richness of each bite blended so well with the juicy, bloody meat and the veal flavour wasn’t quite as powerful as ground sirloin.  each bite had the essence of truffle all over it with the odd bite giving you a hit of the foie gras.

i have to mention that in my whole career of eating burgers, if they are served with a side (which is 100% of the time not including fast food experiences), i absolutely always finish my meal on my fries/onion rings to end on a starchy note.  i had to shovel 1/3rd of the onion rings down to make it happen but this burger was so lights-out-awesome that i had to finish with the taste of truffled veal.

at 13 euro (20 cad) for a burger and onion rings, this isn’t your run of the mill burger shack but considering that it fed two of us handily, i’d consider it as good value.

madrid has treated us well and not just with tapas as we had originally thought it would.  gancho burger, you’ve ruined me in the realm of meat and buns and for that i thank you from the bottom of my stomach.

getting our eats on in the markets of spain

One thought on “the gancho burger – entering flavour country”