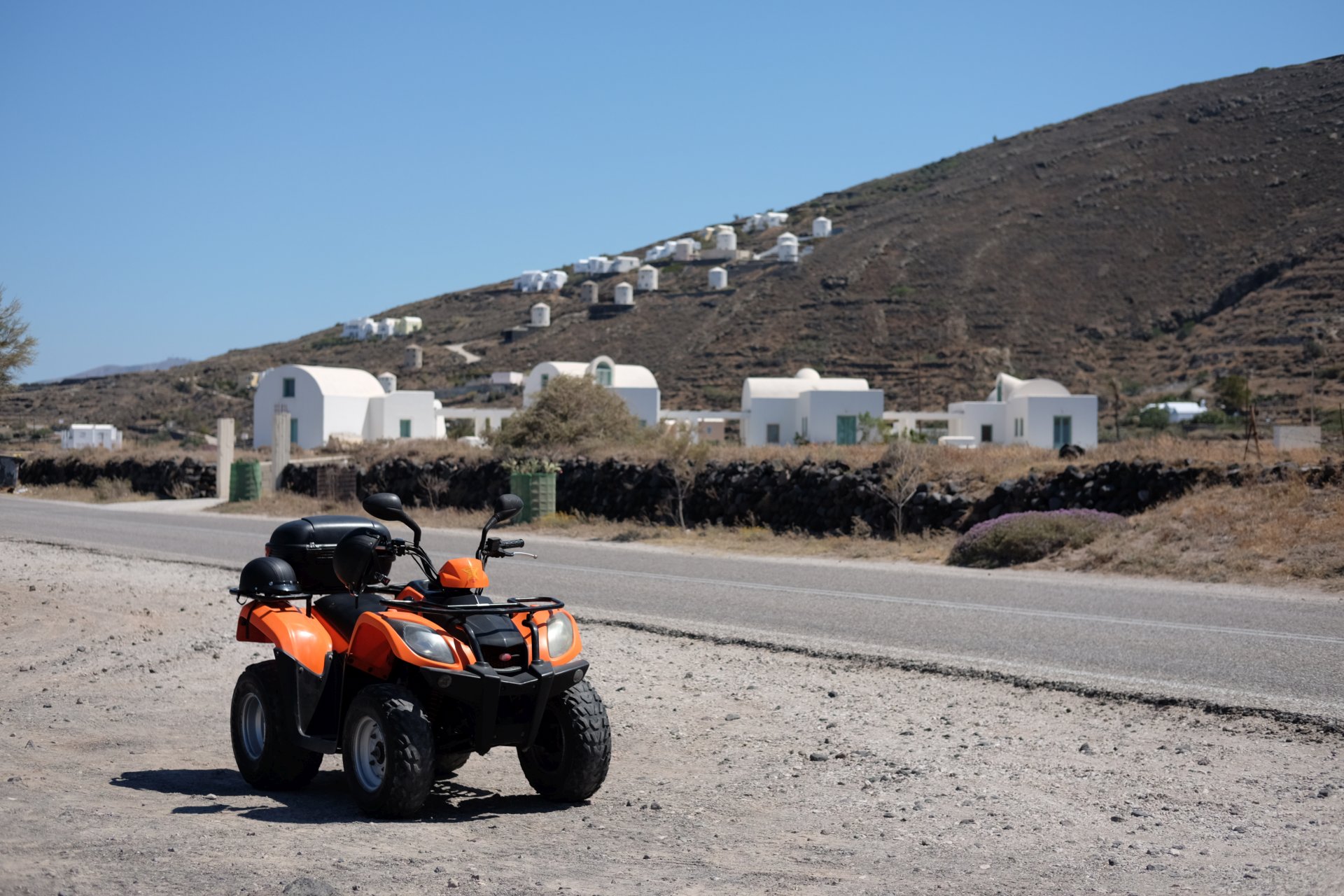 our last atv trek was back in the philippines and took us down a fairly secluded dirt road to view some of the ‘chocolate hills’ up close and personal.

in santorini, atvs are a dime a dozen.  everywhere you go you’ll hear these little engines spinning up which are a nice warning that someone’s behind you.  the buses are usually moving so quickly that by the time you hear them, they’ve already wooshed by you, somehow magically not killing you in the process.  greek bus drivers are equal parts skilled and equal parts crazy.

so we picked up our atv after haggling for some time and ended up with a 200cc putter and a cargo box.  i’d definitely recommend getting the cargo box if you’re planning to stay out all day so that you can dump your beach equipment in there.  with the summer sun beaming down on your back the whole day, wearing a backpack could turn your shirt into a sponge very quickly.

our first stop was the gas station because as we found out later, rental companies siphon all the extra gas out of their fleets leaving just enough to get to the nearest station.  if you walk around town towards dusk when most atvs are being returned, you can see tubes fished into gas tanks that are slowly filling up the jugs on the ground.  resourceful 🙂

anyways, our next stop was south of fira in the town of pyrgos.  the bus schedules to and from pyrgos don’t run as frequently as the others so we never made it there for food or a sunset.  pyrgos is constructed very much like oia with the blue and white colour scheme and is actually just as picturesque as oia with the exception of not being cliffside.  it is located fairly central on the island and is elevated so you are able to view all the towns on the island from this spot.  very amazing to look at.  the majority of pictures from santorini are from the coastline but i think pyrgos would be amazing since the sunset would cast shadows from the buildings over the nearby countryside.  you do need a vehicle to get to and from pyrgos for the sunset though as the last buses leave the town just before 8pm, about half an hour before the best colours of the sunset come out.

on our way to pyrgos we missed a turnoff so i naturally made a u-turn and headed uphill for a few hundred meters.  as we were heading up (on the right hand side naturally), cars and buses started flashing their high beams at us.  it was around noon so i thought it might’ve been that my daytime running lights were off.  well we shrugged it off until it happened again when we were leaving pyrgos on that same road we came in on.  one person highbeamed.  then another.  then another.  and then that person stopped, reversed and told us we’re going the wrong way.

“how does he know where we’re going” – john candy (planes, trains and automobiles)

yeah, we had one of those moments.  immediately following that moment was the instant i pulled a steve martin, looked downhill and saw headlights coming towards us on both sides of the double-line (painting lines clearly isn’t greece’s strong point) and thought ‘oh, f*ck’.  cars and trucks started honking at us even though we were pulled over onto a tiny shoulder overlooking a cliff and the lady that warned us drove off shaking her head.  we clenched our buttcheeks tighter with every car that drove past us until the coast was clear and then i made a very smooth (not austin-powers-like) u-turn and we followed the flow of traffic for the rest of the day.  good way to get the heart pumping.

our next stop was on the north short up at cape coloumbo beach.  the drive along the eastern side of the island overlooks the rugged coastline sits much lower than the towns of fira, firastefani and imerovigli.  on one side you have the towns that sit alongside the clifftops and on the other side you have another cliff that overlooks the blue waters of the aegean sea.  cape coloumbo is kind of off on its own in the northeastern section of the island and as such, aren’t close to many amenities.  mostly houses, a mix of rocks and sand and strong winds and waves.  a big change from the developed beaches on the eastern and southern tip of the island like perissa, kamari and even monolithos.  we parked our atv on the side of the road, walked down through a dirt path and were greeted by the waves and only one couple in sight, who left shortly after we arrived.

we camped out here for a few hours with our beaches and books in hand, ate a few of santorini’s AMAZING peaches (the best we’ve ever had.  every bite was like a waterfall and they tasted as sweet as those peach gummies.  quite amazing that even from island to island, the fruits and vegetables that are grown can change so much (ie: tomato keftedes are made with zucchini from some nearby islands).

we even met an austrian lady with her friend tilly who’s been coming to santorini for 20 years now and she still finds a reason to come back every year.  by this point she told us that she avoids the crowds and tends to stay on the north shore to get her beach time and some space for tilly to roam around.  this puppy was so full of energy, it seemed like he’d be rolling over for belly rubs, jumping two feet in the air and biting his owner’s ankles all at the same time.

the drive along the coast is a very enjoyable one too.  to say it’s picturesque would be an understatement however the one caveat is that if you’re doing it on an atv/scooter, you better watch your tail for cars and buses.  buses take no mercy on anything that lies ahead of them on the road an even though they’re the biggest vehicles on the roads of santorini, they drive like they’re the nimblest.  we’ve had buses pass us like we were standing still at roughly 50km/h (i couldn’t tell for sure since our speedometer was broken and our gas gauge was only partially functioning) and almost blew us off the road with the gust that followed behind them.  driving cautiously, we made it (slowly) all the way up the hill to imerovigli which is a town in between fira and oia.

the view from the narrow corridors of imerovigli are nicer than fira’s and rivals those of oia’s though the difference is that it was a ghost town compared to both other towns.  on our way down to the cliffside at roughly 5-6pm we literally saw less than three people on the restaurant patios.  not for lack of the view either, this town is just looked over by the swankiness of oia and the centralness of fira.  skaros rock is an ancient fortress used to defend the island from intruders and it is all but abandoned nowadays.  it sits a little off the shoreline of the island and it is open to the public to hike.  you descened about 100+ stairs past the gorgeous (and expensive) hotels of imerovigli, complete with infiniti pools and huge patios, and then must walk up another 50-100 stairs to get onto the rock.

and skaros rock, where we unexpectedly spent the rest of our daylight hours:

once on the rock you can walk westwards to get a perfect view of the caldera, down to the chapel and upwards to the peak.  all of them give great vantages of the sunset so we opted to watch one of our final sunsets of santorini here.  surprisingly enough, it was completely empty with the exception of the odd couple that walked past us to get to the edge of the rock however we saw them walk back to the town shortly so we remained on our own.  this was by far our favourite sunset of our whole stay in santorini.  we never experienced oia in the evening but judging by the crowds in the daytime and every account of how early you must be there in order to secure ‘your spot’, it wouldn’t have been very enjoyable for us.  fira was equally as busy and gets all the cruiseship traffic because of the port below town so you do feel a little locked within the crowds there as well.

we both loved that we could enjoy the sunset without people fighting for vantage points around us nor having to witness the selfie-stick posse taking their future profile pics.  i don’t know how long we stayed perched on skaros rock with our cameras in hand and thoughts on our minds but it felt like forever and an instant at the same time.  i will forever remember greece and this is the memory that sits above the rest.  another bucket list item checked off.

we ended our night with a 5 minute drive downhill to fira, returned our atv and picked up a quick dinner at lucky’s souvlaki.  i think this was our third or fourth visit by this point in the trip, it’s hard to keep track after your brain’s been getting baked in the sun all day.  2.50 euro per pork pita gyro goes a long way.  i made the mistake of ordering two off the bat and haha’s ‘plate’ ended up being a serving size for a small family.  the store owner ‘lucky’ is so typically greek that when i asked him to cancel my second gyro he confirmed it was ok but didn’t give me a refund and gave me a giant beer instead.  the customer next to me ordered three chicken pitas and one of his turned out to be pork which he brought to lucky’s attention.  did he get a refund?  not exactly.  did he get a chicken pita?  negative.  instead, lucky schooled him on the benefits of eating pork over chicken, flexing his muscles in the process, claming that he didn’t get those guns from eating chicken pitas.  awesome.

and that’s our atv day in santorini in a nutshell.