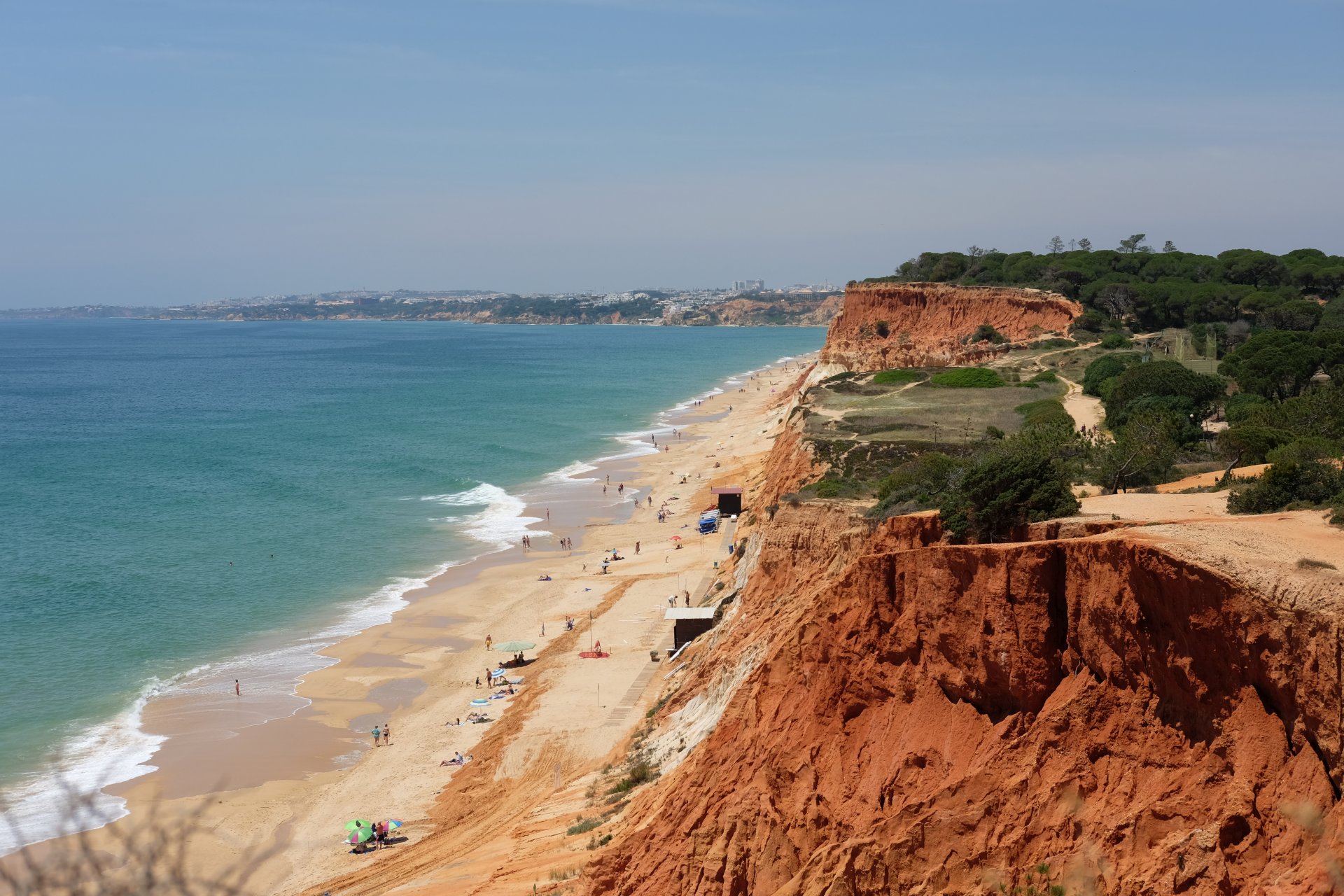 our first stop in portugal was to albufeira, a beach/resort town on the southern tip of portugal in a region called the algarve.  the algarve is best known for their beaches and as such, sees a huge number of travellers from all over europe during the summer months.  both haha and i really didn’t do any reading up on the region until we arrived; we more or less piggybacked this leg on cydia’s bookings since we met up together in sevilla.

we actually opted to leave sevilla a day early to get an extra beach day in in albufeira.  our plans for the week were basically… wake up.  eat something, somewhere.  lie on a beach.  eat something, somewhere.  and repeat.  so like this title says, we have the beaches.  our meals consisted mostly of bbq (at the least, it was our better meals).  and brits.  my god.  the brits are an experience on their own.

the brits of albufeira
on our first day, we walked down to praia dos pescadores, the closest beach to our airbnb and basically the main beach in old town.

the first thing that caught my eye was that there was english on everything from the menus to the billboards to the signage.  the overwhelming majority of the individuals walking througout town were cherry red british folks of all ages.  all the pubs with tvs seemed to be advertising soccer and the beers of choice were super bock (portuguese) and guinness.  menus seemed to advertise piri piri chicken, pasta, steaks and a lot of grilled seafood.  in short, i’m not sure what i was expecting out of portuguese culture but this was quite different from the blurry picture in my mind!

i haven’t been to the uk before so call me green when it comes to their behaviour.  i guess i’d describe them as a bit, um, crass?  throughout the old town (which ironically is built up with bars and clubs and looks more modern than the quieter new town), packs of travelling brits are liquored up, shouting and more or less acting like what you’d expect out of a group of drunk 20somethings in a resort town (can you say whistler?).  except that aside from the few younguns in the groups, there are plenty of 30, 40 and 50+ year olds that are behaving in the same way.  as i was usually the last one to sleep, i had the privilege of bearing witness to the drunken stupor from all sorts of ‘wankers’ and ‘cunts’ (<- in their words exactly) as they slogged their way past our bedroom between 1-4am.  SUPER classy.  i won’t bore you with my related rants but seeing them in action has made the uk that much more unattractive.  i highly doubt that it will be worked into my travel itineraries in the coming years.

the bbq of albufeira
i think that as a result of the huge number of tourists and the brits in particular, i’d rate the food options in albufeira as below average; in terms of quality as well as selection.  i think that the business model of a resort town holds true here; a small % of high end restaurants with good food and a big % of restaurants serving mediocre food… good enough to get by but nothing spectacular.  cy did his homework on the restaurants and he landed us at an amazing bbq shop that started as a takeaway shack and has since added about 15 seats inside and on his patio.  we ventured back twice, missing a third time with them closing early due to an illness, it was so good and very reasonably priced.  the owner is top notch, his wife helps him in the kitchen and his daughter, who he told us has been raised *at* the restaurant, is running around flashing her smile for all the patrons who decide to eat their meals in-house.

each ‘menu’ consists of meat, rice/fries and a pop/beer/wine and runs about 7 euros.  my fav meal while in town.  the owner’s a blue collar guy that works his butt off; totally deserving of his near 5* rating on tripadvisor

the beaches of albufeira
this is what we came to see.  5 days in albufeira went by so quickly however in that time we managed to make it out to three different beaches, two of them needing a car to access.

we spent our first two days at peneco beach vibe: a mix of everything.  being next to the town square, this was the busiest beach we came across.
crowd: family friendly, older crowd as well as the odd musclehead.  don’t be surprised if you find yourself next to a group of drunk brits acting like, well, themselves.  with a large number of clubs in this area, i’d have to assume that things get sloppier as nightfall approaches.  we never felt the need to find out for ourselves.
water: a deep blue colour, quite clear and cold.
etc: lots of lounge chairs available, many eating options as well.  requires the least amount of work to get to if you’re in town though the beach isn’t the cleanest.  my guess is if you’ve gone to any of the other beaches first, you won’t want to visit this one unless you’re too hungover to drive

first day trip was to falesia, on the east side of albufeira vibe: totally secluded.  endless kms of space to post up and have a spot of your own for quite a stretch of space
crowd: mostly older people towards the area we entered (about halfway along the whole stretch of coastline).  this was smack dab in the middle of the the private resort areas.  as we walked eastwards, the crowd got noticeably younger to the point that we found ourselves amongst many people that were a few notches above us (speaking for me personally).  i don’t know the name of the of the area that we exited but it is a major taxi dropoff/pickup spot
water: waves were quite strong here and the water was aquamarine in colour.  a lot of sand would get moved around with the waves crashing upon the shore.  the dropoff was a little more pronounced than peneco beach so i wouldn’t venture too far out if you’re not a strong swimmer.  the waves are also strong enough to pickup moderately sized rocks which can smack your legs out of the blue
etc: no lounge chairs available unless you make it down to the main drag on the east side of the beach or more west

our last day was spent at sao rafael crowd: mostly younger families, kid friendly
vibe: quiet, very chill with only one restaurant on the beach.  reasonable prices and on the nicer side of dining
etc: loved the look of praia de sao rafael.  althought it was the smallest beach we visited, it was very secluded and nestled in between cliffsides that formed a very scenic coastline.  on the west side of the beach is a break in the cliffs that allowed you to walk over to an even more secluded area.
water: waves were moderate here and i think the water was just slightly on the warmer side

so there you have it… our 5 days in albufeira summarized as straightforward as i could think of.  we barely scratched the extensive list of beaches that the algarve had to offer.  an absolutely breath taking region, these beaches could rival anywhere in the world, it’s no surprise that it’s such a popular travel destination for families and partygoers alike.  there’s a lot to explore in this region of portugal… hope we can find a way to come back sometime!

One thought on “albufeira in a nutshell – beaches, bbq and brits”