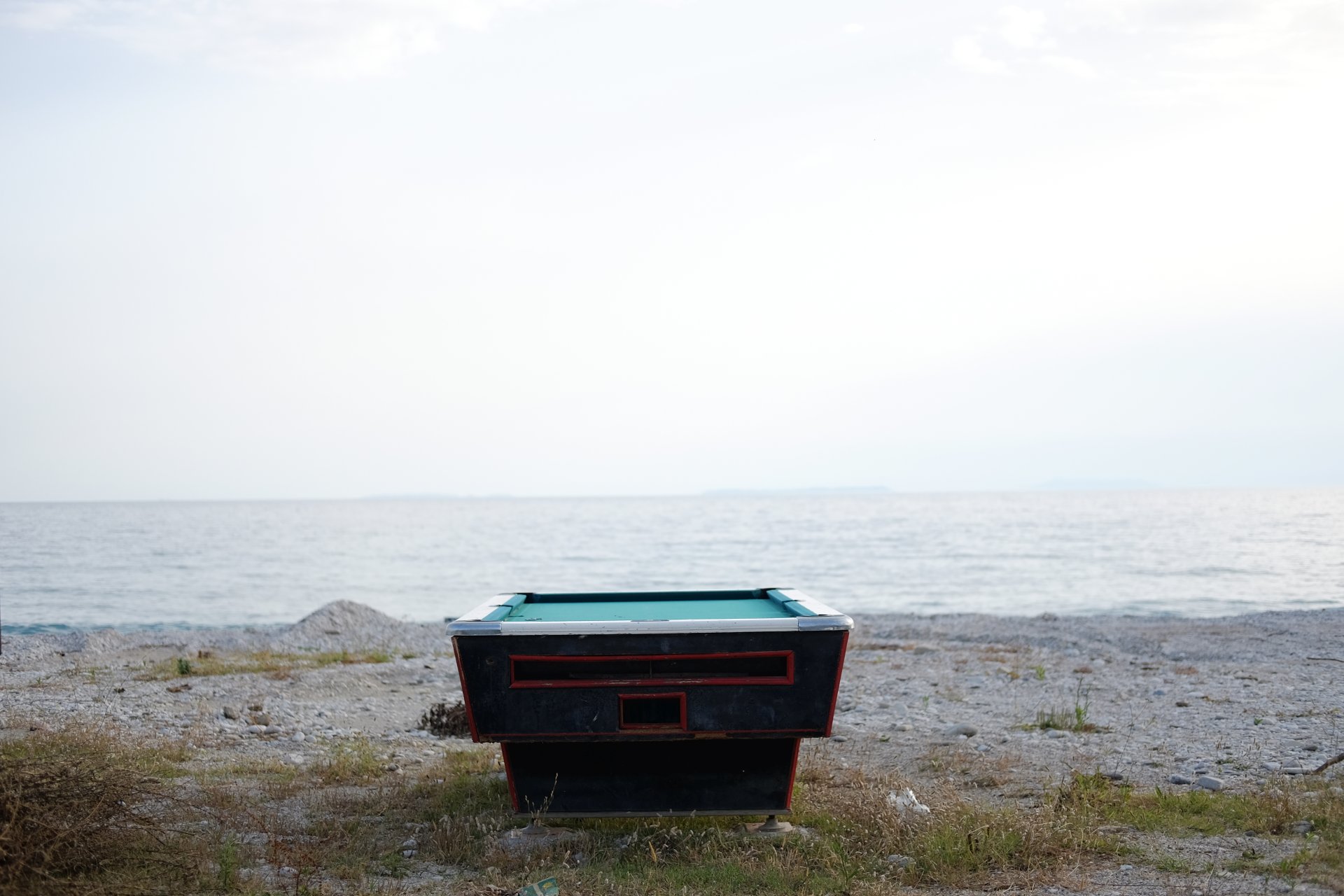 we spent five days in sarandë and had two days to spend roadtripping it out in search of beaches.  spending our first day on our hotel’s private beach was a great day in it’s own right but we had no idea what we were going to find once we got out of the city’s limits.

a little south of sarandë is ksamil (sah-meal), a beach town that has been developed quite well over the years.  ksamil’s waterfront is more like a collection of bays that is lined with restaurants and bars.  each establishment has it’s little plot of real estate and like greece & portugal, give you free lounge chairs if you choose to dine there.  we had our hotel call us a cab to take us there and we ended up finding this same driver for the next few days.  a big hulking man who was the most relaxed driver we’ve ever seen; the complete opposite of how taxi drivers are in, well, pretty much the rest of the world. if memory serves me correctly, i already mentioned that food in albania is quite cheap right?  how cheap you ask?  a giant plate of mussels runs 500lek ($5 cad) and is fresh as can be.  we passed a huge lake on the way to ksamil which is where most of these mussels are farmed from.  i spent a good portion of our albanian mealtimes sipping back on cheap wine while i watched the seafood carnage ensue in front of me.

the italian food is quite good here as well as pastas are always cooked al dente and the sauces are rich and creamy.

ksamil’s beaches are fine white sand and if the internet is correct, have been imported from other areas of the ionian sea.  the waters are once again very clear, pretty warm and quite calm because of how protected the area is.  there are also three islands that are barely a 5 minute boat ride away that have even more secluded beaches however the sun only shines on them at certain times of the day so you do have to time it well to get out there.  we were there in mid june and the sparse crowds were made up of mostly european families.  a very laid back vibe which i think livens up during the summer season once everybody is on holidays.

we spent our last full day in sarandë driving north to borsh beach.  it is along the same coast as the better known dhermi beach however that required an extra 2 hours of roundtrip driving so we opted for borshi.  about an hour’s drive from sarandë, borsh has 7km of uninterrupted waterfront real estate with white pebbles, clear ionian waters and is nestled in tightly within the valleys of the albanian riviera.  the drive was amazing and the roads were in perfect condition.  lots of windy turns, changes in elevation with some tight switchbacks; if you like driving, you will love these roads.  we unfortunately had a very small car that only had a handful of horsepower so it wasn’t as fun as it could have been but the views made up for it. oh, and speeding isn’t a great idea.  not because of the road conditions but because of the random traffic jams.  these aren’t caused by fellow drivers, bikers or pedestrians but from livestock!

so many goats along this road and some groups were even unattended!  it’s hilarious that as you drive up behind them, both the goats and cows will throw a shouldercheck backwards and then will slowly move out of the way for you to pass 🙂  and don’t be one of those aggressive drivers because one guy ahead of us had honked to get the goats to move aside; the herding dog didn’t take too kindly to his request and turned around to chase him uphill for about half a kilometer.  the goats have attitude too; as the pack of goats were moving aside for us to pass, one goat headbutted another to push him back into our lane.  talk about bullying.

the turnoff for borsh beach was one tiny street before a gas station.  we knew we were in the right area because we could see the beachfront from the valleys above but if anybody was going the speed limit, they would easily pass this turnoff.  making our way down this road took us through a huge crop of olive trees.  this area is well known for it’s olive production and the big green shrubs keep the beach hidden from the highway.

from the research i did on borsh, it sounded like development has really taken off which to me, sounded as if it was on the cusp of becoming a major destination for vacationers.  what we found couldn’t have been further from the truth, that, or that albania’s definition of ‘development taking off’ is much, much different from what i’m used to.  exiting the entrance road and coming out to the water brought us to a huge white pebble waterfront with very sparse restaurants and virtually no lounge chairs and umbrellas in sight.  you can go one of two directions; we drove to the right first and came across a few rvs, tents and some random deck chairs that the campers had set up.  i’d say this was nearly a km that we drove and there were only two restaurants, both of which were still closed.

we drove the other direction and didn’t come up on a storefront for nearly another km.  in the middle of nowhere we found four beach chairs setup with umbrellas with no restaurants or hotels in sight.  we asked around if these belonged to anybody and nobody could give us an answer so we set up camp there for a few hours. although the water was wavier than ksamil and mucobega i think that this was my favourite beach so far.  the water was such a good temperature and the views were like nothing i’ve seen.  looking left and right gives you a view up and down the coastline.  looking out to sea is nearly endless water with islands in the far, far distance and looking backwards gives you a shot of rocky, grey mountains looming over the olive trees.

what i’ll always remember about borsh beach is the sound that the current makes as it’s receeding back into the sea.  the clacking of the thousands of the pebbles being pulled off the beach with the sound of the waves mixed in is so relaxing, i could’ve spent a week here and not gotten sick of it.  i even brought my laptop along to do some writing this day, after i had finally finished reading my first book of the trip (which i’m ashamed to admit took roughly three weeks).  maybe the best office anyone could ask for. our five days in sarandë have been the biggest surprise of this trip after portugal.  all of us were blown away by the people, food, value and scenery and the beaches were the icing on the cake.  i am definitely coming back and i’d fully expect it to have changed a lot by my next visit.  until then, i’ll have to live vicariously through any friends that will be adding albania to their travel itineraries.