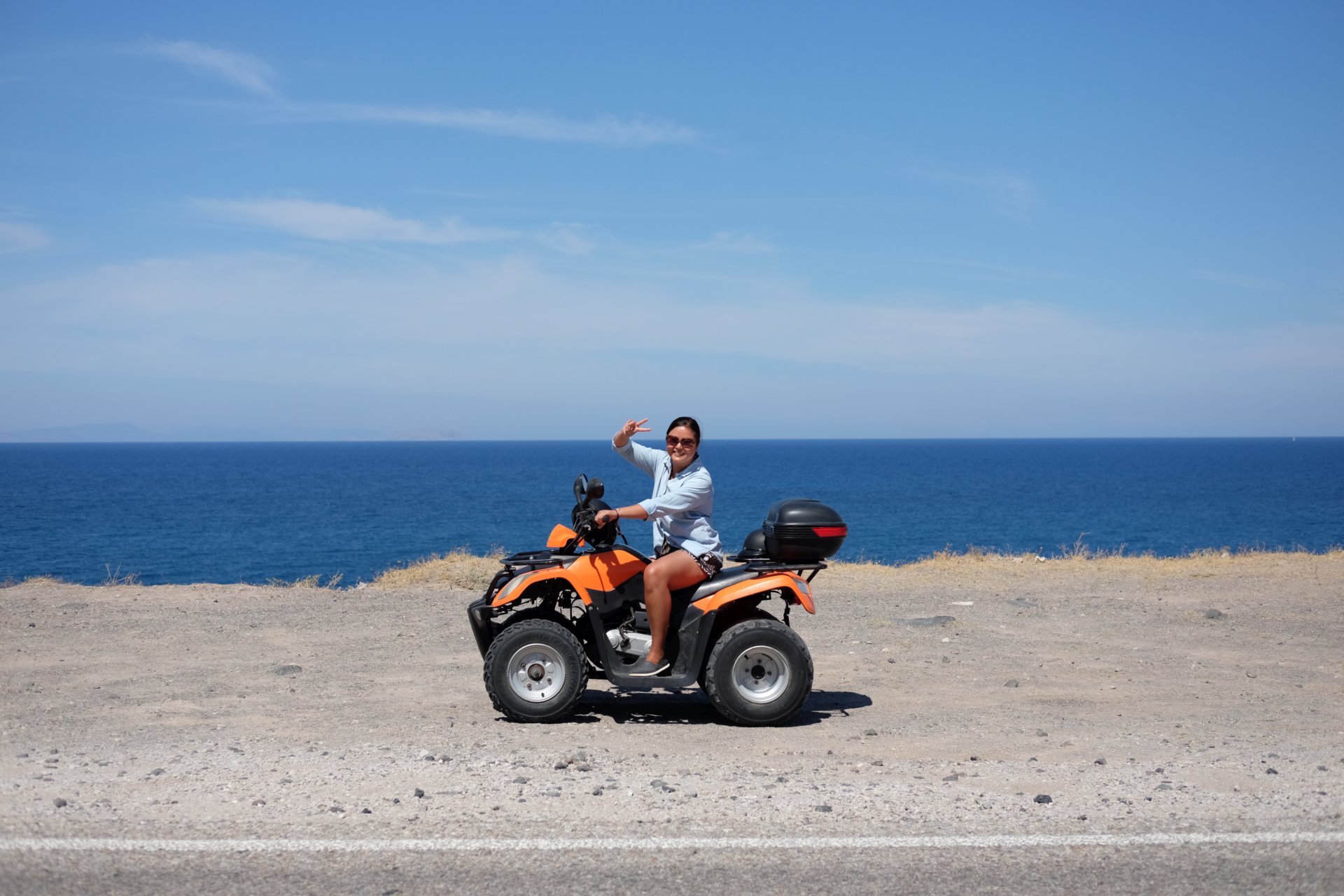 q. favourite meal
a. limani in saranda.  we’ve had some good meals this week across the three (actually more like 5 towns including the beaches) but we went a little overboard on this one.  a big surprise is the influence of italian culture in albania; it is almost impossible to find a restaurant that doesn’t have any pasta or pizzas being offered which are all prepared according to italian spec (brick oven & thin crust, all pastas are al dente).

q. most memorable moment / best highlight
a. renting an atv to explore santorini.  our day started out in fira and we went to pyrgos for breakfast and to have a look at the island from an elevated perspective.  you can see all the towns of the city from pyrgos and it’s a nice change from the cliff views offered up by fira and oia.  from there we went up north to cape coloumbo beach, a black pebble beach with strong waves that is all but desserted save for the one nudist couple we saw (that left shortly after we got there).  on an island that has its towns jampacked with tour buses, cruiseship travelers and souvenir shops, it was nice to get away from the noise for a bit.  from there we stopped by imerovigli to potentially catch the sunset and that turned into a hike up an old fortress (perched off the cliffside on what they call ‘skaros rock’) and watched the sunset there in silence.  it was both serene and kind of weird at the same time since there are rarely any travelers who will miss a sunset in santorini yet there we were, sitting there with nobody within half a km of us.  we ended the night back in fira after somehow managing not to die on our 10 minute drive home, either by brake failure or getting run over by speeding buses; by that point we treated ourselves to our favourite gyro spot and went home as happy as can be.

q. greatest challenge
a. getting INTO albania.  our travel day consisted of checking out of our hotel in santorini at noon, wandering the island for seven hours, bussing it to airport for an 11pm flight to athens, sleeping (or attempting to) on the airport benches for a 530am to corfu, cabbing to the port of corfu an hour before the ticket office even opened and taking a horribly nauseating ferry ride (during a storm) across the channel to get to saranda, albania.  once we arrived we were ushered out of the ferry into what i can only describe as the downpour of a thousand angry souls.  water was streaming off of my glasses as we waited and waited and waited and waited some more.  the customs ‘office’ consisted of two one-person shacks on either side of a running stream and our officer was held up with one individual’s passport for at least 10 minutes.  one by one the people behind us left to go to the other officer and by the time we did the same, we were the last ones on the arrivals platform.  with no jackets or umbrella, dressed in shorts and standing there with our luggage, we were completely drenched and just happy to get to our hotel.  the gods must’ve had mercy on us because the blazing sun came out a few hours later.  guess we can laugh about it now although we were laughing along with the norweigians behind us in the lineup as they were rolling their eyes.  (so, are you here for the weather?)

q. what i miss most from home
a. being able to remain sedantary for over a week.  the last few weeks have involved a lot of travel and it’s taking a toll on me.  even our beach days of late have required a commute of sorts.  i’m really missing the luxury of hunkering down somewhere for a while to recharge.

q. next stop
a. kotor, montenegro

q. weirdest observation about current culture
a. albanians are SO friendly.  for a country that hasn’t fully embraced the english language, those that can’t speak it sure make a really good effort to try and communicate, usually with a series of hand gestures and smiles.  they are also very on-point with customer service which is usually hit/miss in europe.  from the laissez-faire attitude of the french to the to the spaniards who aren’t even around most of the times.

q. one tip i would give myself if i were to come back
a. spend more time in the south of albania and have a car handy for roadtrips.  maybe settle down for a week in himara for the beaches, a few more days up at dhermi beach and camp under the stars (there is a campsite where you can rent the whole shabang, basically a tent hotel), visit girokastra and some older cities like berat to look at architecture from the 13th century.  albania has history running as far back as 2400 years ago and devoid of the crowds you’d find in italy and greece.  for me, it’s no longer an ‘if’, i’ll definitely be back in albania as i need to spend more time at borsh beach.

q. friends i’ve hung out with/visitors
a. from saranda onwards, we’ve been with my vancouver buddy j-lo

q. one random/weird/cool thing i learned about the country i’m staying in
a. i’d say saranda as a whole.  all of us had done very minimal research into the town and we hadn’t decided on coming here until just a few weeks ago.  our thought process was that since we had to get from greece to croatia, we might as well stop along the way to check out some areas that weren’t on our radars and i’m so glad that we went that route.  by now my love for seclusion is pretty well documented and saranda is just that.  the crowds usually don’t show up except for july and august and it is usually from neighbouring countries as well as the locals themselves, or so we’re told.  food is both cheap and good, a combination that usually doesn’t go hand in hand.  landscapes are breathtaking.  i can’t say enough good things about this country.

q. one new experience/memory that will stick with me
a. there’s been a lot of memorable moments from this week from dipping in the freezing cold waters of the blue eye to a mesmerizing drive through the southern albanian highlands to the multiple beaches we’ve visited between santorini and saranda.  the one that sticks with me the most would be, i’m not sure if diving is the right word here, jumping (?) off the walkway into the water with j-lo and a crew of albanian kids that were hanging out there.  neither of us are strong swimmers though j is able to be in the water without the fear of imminent death looming above him.  i’m not sure what possessed us to jump for the first time after we both shook our heads when we were asked to join in but i’m glad we did.  taking baby steps to get over this aquaphobia

q. portion of luggage that’s been the most & least useful
a. boardshorts.  starting to love beach vacations and being able to wear the same pair of shorts everyday is a godsend.  time to burn all these unnecessary pairs of underwear.