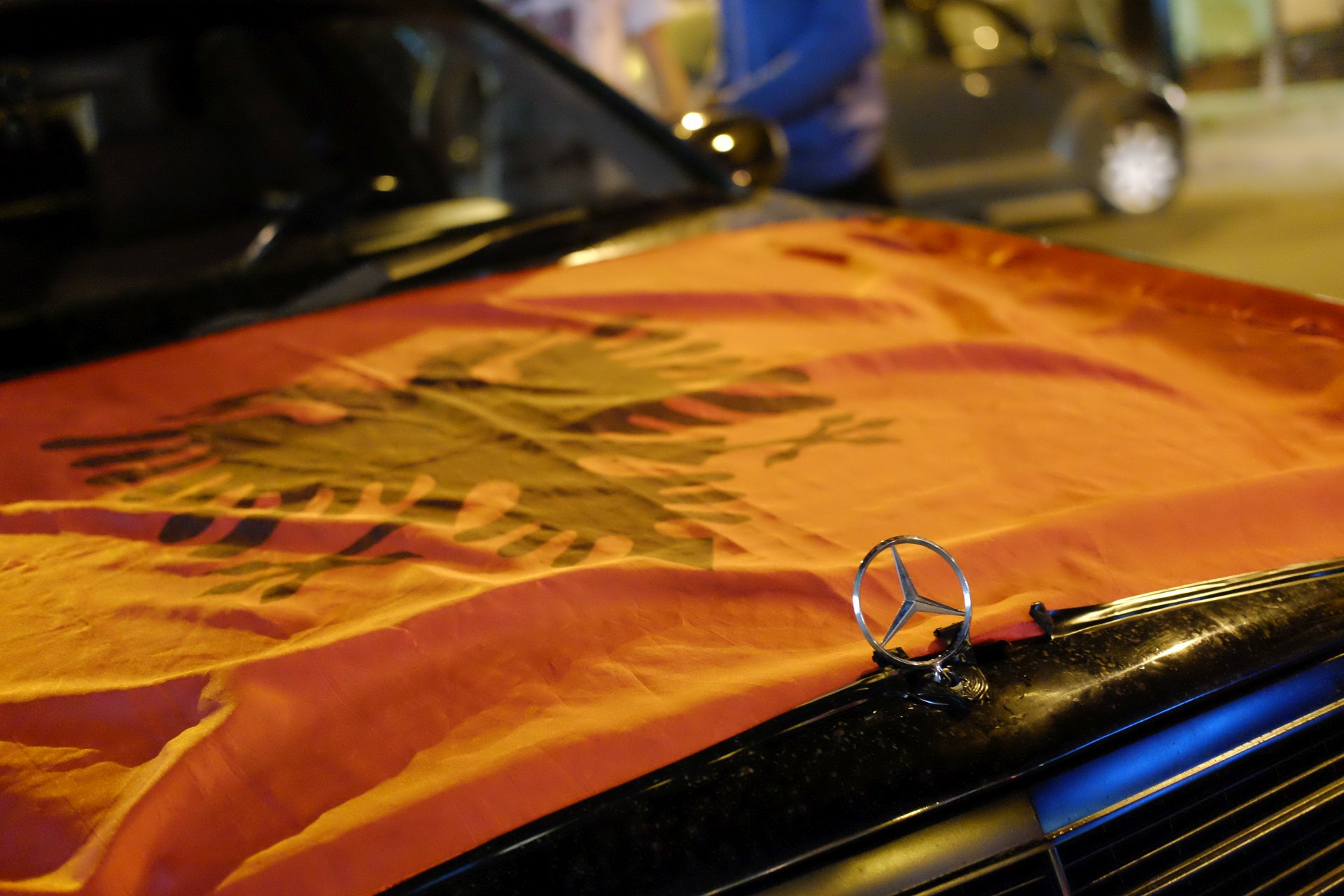 our european itinerary has been all over the map and has seen numerous changes as the weeks have gone on.  about the only thing we knew for certain was that we wanted to spend two weeks in croatia however getting there was a giant question mark.  once we narrowed down that we would be coming from santorini it took another week or two to decide that we would take our time in getting to dubrovnik as opposed to flying directly there.

by ferrying from corfu to sarandë, we talked ourselves into bussing our way north from the south of albania through montenegro and to dubrovnik, located on the southern tip of croatia.  now i’m not exactly a great traveler by bus and this stretch did a number on me.  fortunately, bus travel is a lot easier when you’re not slamming down drinks beforehand (which coincidentally has left me scarred from visiting hawaiian luaus).  we had planned to spend two nights in tirana which broke up 13 hours of bus travel into two legs and would take us to montenegro at the end of it.

our first bus ride was the longest haul and had lots of wildcards.  language was a huge issue as the older attendant at the terminal couldn’t speak any english.  we attempted to buy tickets the night beforehand and he just kept nodding and telling us to ‘come tomorrow, will be ok’.  we got the same answer when we asked which time bus we should be taking.

at the end of the day, the man was right and we got our tickets and seats without any hassle.  from the moment we got onto the bus we knew it was going to be a looooong ride.  nearly nonexistent aircon on a day that it was already above 30degree heat at 9am resulted in wet tshirts all around and not the sexy kind.

the next 6 hours were a bit of a blur, straying in and out of consciousness due to the heat.  at some point the crowds thinned out and the ride became much more manageable as temperatures cooled.  it was an interesting ride to say the least.  at some point a handful of women jumped on the bus dressed in their sunday bests.  they stayed on for about an hour before hopping off along the highway in the middle of nowhere at one of the many stops on our route that weren’t marked.

finally arriving in tirana saw us getting dropped at a random bus depot.  i say random because there isn’t any actual bus station here even though it is the capital of the country.  as such, we weren’t sure exactly how to map our way to our accomodations.  after walking along a main road for a few minutes, we stopped to get our bearings by looking at our screenshotted maps.  within a few minutes we were surrounded by locals offering to help.  normally i’d feel quite threatened but something about this felt very different.  it was obvious that everybody knew there was a huge language barrier but they all attempted to help us nonetheless.

we did eventually figure out how to get to the hotel after flagging down a cab although he also had to ask locals for help.  now that we made it to town we had roughly 36 hours to spend exploring it.

our hotel was labeled as a hostel but with individual units, i would have to rate it as the most modern hotel of our entire trip.   everything was very new, wifi and the shower worked as it should have, something we can’t take for granted nowadays and it was also cheaper than any accomodation except for free room and board at my uncle’s apartment in hong kong.  two big thumbs up for freddy’s hotel

at first glance, tirana is… i don’t know how to describe this without making it sound bad… a mess.  a concrete jungle without the organization and planning of a tokyo.  tirana has a long history of living under the curtain laid by it’s communinist leader/dictator enver hoxha.  the country saw drastic changes as they rebuilt themselves post world war 2 and while i personally felt that he did alot to better the country, all the steps forward that he made for adult literacy, developing a self sustaining economy and improving healthcare, i can’t help but feel sympathy for the country for having to live under an iron first.  fear and penalty of death was a common threat in those times and if you didn’t buy into his preachings, punishment was swift and merciless.  years of communist culture are engrained in the city of tirana and it’s apparent in the architecture.

case in point is the pyramid of tirana it was built in 1988 after enver hoxha passed away and was originally intended to become a museum to honour the great leader.  within three years it turned into a convention center and it was subsequently used as a NATO base during the kosovo war in 1999.  as you can tell by the condition nowadays, it’s more or less been left up to rot.  covered in graffiti, broken windows and television & radio antennas, it’s now a memorial of tirana’s past.  we were told that we could climb it to the top and saw some kids who had made it up there but opted to keep our faces intact as the slide down seemed like it was an invitation for some bad things to happen.

while an old city, tirana is also making big strides forward.  our first evening was spent in the blloku neighbourhood.  during communist rule, it was used as housing for political families and ordinary citizens were not allowed within its limits.  since the fall of communism in the late 80s, this are has turned into the most modern area of the city with cafes, restaurants and bars lining the narrow streets and people practically spilling off of the many patios in the area.  although food was similarly priced as in sarandë if not cheaper, the drinks were hugely inflated rivalling north american prices.  the area’s been labeled as a playground for the young albanian elite and it definitely felt that way.  as per usual this trip, we felt severely underdressed and exponentially less good looking than the locals (although i’m sure i would’ve jumped up a few points had i been over 6 feet tall).  we also followed one of the recommendations to visit the sky tower in the blloku area to get a bird’s eye view of the city.  glad we can check that off the list but i wouldn’t recommend it to anybody else unless a skyline of a grey city in an 80s themed rotating bar is something you’d be interested in.  the waiters also looked dead bored there. our second day was spent sightseeing which for the most part was at bunk’art, a historical museum built into a nuclear bunker.  we spent practically a whole afternoon there.  we spent our final evening in tirana watching the final albania match of the euro cup tourney.  we arrived a little after kickoff and got one of the last seats in an area where three patios converged.  projection screens were setup all over town and the fans were out in full force.  kids had their face paint on, jerseys and flags could be seen everywhere.  this game wasn’t nearly as entertaining as the match against france as romania didn’t have the same firepower but that didn’t stop albania from playing aggresively the whole match.  they managed a late goal and won their first match of euro cup play.  couldn’t think of a better way to end the tournament even though they had no chance at advancing.  as we made our way back to our hotel the noise level was slowly increasing by the moment.

honks started from every direction and before long the roads were gridlocked with people on top of cars and waving their albanian flags proudly.  we spent about an hour walking around the streets just taking shots of the various smiles and i have to tip my hat to them.  coming from a city with supposedly classy fans and witnessing the riot that followed the 2011 stanley cup finals this was such a positive way to end the tournament even though the team didn’t advance. as for food, tirana did offer some more traditional fare compared to sarandë.  we tried fergese which was a sort of stew made with peppers, cottage cheese, tomatoes and beef.  the consistency was similar to the meat mixture in a lasagna with with more cheese.  much, much more cheese.  our first bites were good, the second and third, not so much.  such tourists. the kosova sausage was deliciously spicy, a nice change from our relatively un-spicy diet during spain and portugal.

the fli (flija) pastry was one of my favourites.  it looks similar to a cake but it is actually made of of many thin layers of pastry baked bit by bit.  each layer is put on and cooked with saç (hot cinder blocks attached to a metal dome) to lightly brown the outer layers.  as one layer cooks, another layer of batter is added and so on and so forth.  the final product is almost 2 inches thick and tastes like filo pastry.  we at this alongside the fergese and our risotto.

this rice dish was called rice & beef on the menu but ended up as a creamy risotto which none of us seemed to mind.  cauliflower, broccoli and a super creamy consistency.

and of course, haha’s wet and dry lamb innards!  this is the closest thing we’ve had to chinese food this trip, the wet innards was similar to a saucy baked rice.  just needed some bok choy, egg and we would’ve ordered a second helping!

it was a short stay and we easily could have spent a few more days roaming this sprawling city but alas, time is finite and we’ll be moving on to montenegro.  before i forget, when in tirana, have lots of gelato.  italian food is at the roots of albanian culture and this may be the cheapest gelato you’ll ever find.  with very little hunting around we could find single scoops as cheap as 40lek (40 cents cad) and i’ve found a blogger who challenged himself to find the best deal in town.  i believe he ended up with 8 scoops for just 100lek.  while i’m not a conneiseur of gelato, each one we got had a very creamy consistency and i couldn’t taste any difference from the ones i’ve had in italy.

albania… the country of many surprises 🙂