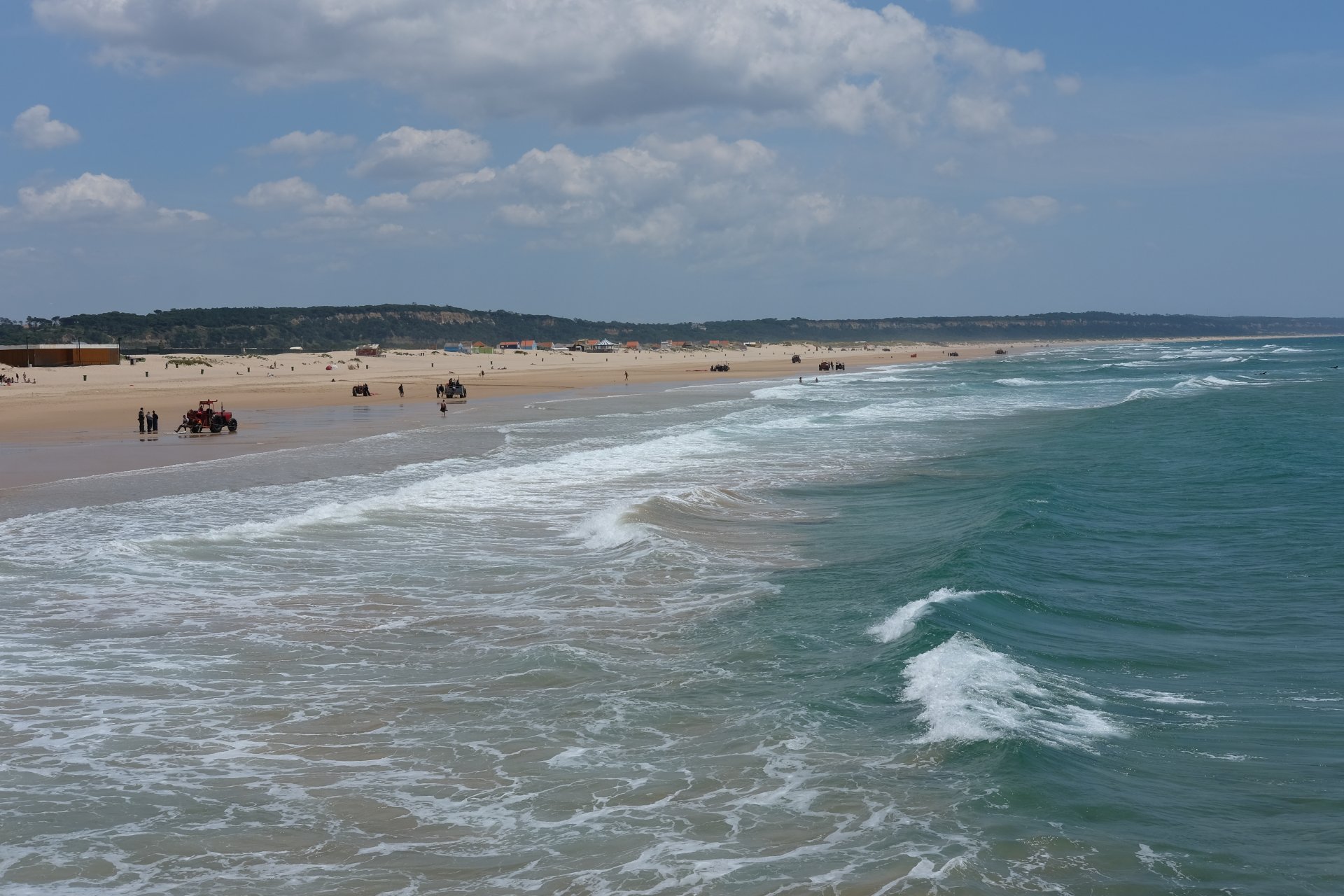 we took a day off of stairclimbing the streets of lisbon and headed south to squeeze in a beach day.  our original plan was to head to cascais but since we woke up late (something that’s been happening more regularly), we made plans to head to a closer beach on the south shores of the city, costa da caparica.

from lisbon central you have two options.  you can take a direct bus that leaves from one of two terminals or you can find your way to the metro station cais de sodre and take a ferry & bus from there.  we weighed out the options and taking a direct bus involved some backtracking so we took the advice from a website and took the ferry route.  both routes cost the same but finding the bus stops is not as straightforward as it appears to be (plus the buses run less frequently).  from cais de sodre, we hop on a 10 minute ferry across the harbour to reach calcihas and at that point we begin hunting for our bus stop.  this is where we find out that organization isn’t a strong trait of the portuguese.  the bus stop looks like a semi-circle with a half dozen lanes feeding into the curve and the bus stop numbers are located on a little sign AT each stop themselves in tiny print.  putting together a diagram at the ticketing booth hasn’t crossed their mind and instead you have to play frogger to run around these giant lanes in search of the right stop.  so anyways… we survived and it’s on the second last island to the left (east).

*bonus info: if you want a fun ride, sit as close to the front of the bus as possible.  the portuguese are such nice people in general but when put behind a steering wheel they turn into rabid animals looking for blood.  after narrowly missing running a parked car off the face of the earth, our driver attempted to travel back in time on the first straightaway we hit.  80km/h in the city with a packed bus and his hands gripping the center of the wheel, which if you’ve ever tried turning in this method, is completely useless.  free roller coaster ride.  the ride to caparica takes about 20 minutes on the express bus (~40 mins on the non-express) and is the end of the line so without any fear that we’ve missed our stop, we get off and walk in the general direction of the water.

caparica is a small beachtown that is a destination for many portuguese and visitors alike.  we didn’t fully understand why until we reached the water.

the beachfront runs for nearly 20km southwards… it’s absolutely masssive.  they even have a mini train that will shuttle you up and down to different areas of the beach if one section is too busy.  i’d say we really lucked out on timing for our portugal portion because by travelling on shoulder season, the beach was almost a ghost town.

the waters are blue, the waves are large and crashing on the shore and the sand is not only fine but pristine and seemingly endless.

i also noticed that the cleanup crew was out in full force which would explain why large sections of sand are completely devoid of any objects including shells.  this seemed like something only the japanese could/would do but low and behold, it’s in portugal.  i suppose that given the popularity of their beaches in general and how costa da caparica caters to such a large crowd, maintenance can never be a good thing.  i have no idea if they do this on a regular basis; maybe it’s just off-season work but in any case, it’s obvious that portugal is on top of things when it comes to providing a good beach experience

before i dozed off, i saw a pair of surfers show up to the beach and set up in their spot to scope out the waters.  when i woke up, a random dog had shown up and wouldn’t leave them alone.  it was pretty funny.  this dog had his eyes on their feet and his mind set on thinking he was getting a ball to play with.  each time the guys kicked the sand the dog would track the clump of sand and you could see his face turn from being excited to confused and disappointed

with most of the cafeterias closed and a home cooked dinner waiting for us at home (haha’s home cooking *link*) we looked for any snack we could find in the area and stuffed our faces with a pair of bifanas to tide us over.  i’d say we’re starting to get used to this beachlife.

while the wind could have been a little kinder to us, we still had a great day on the costa da caparica beachfront.  with literally miles of open, well maintained (first time i’ve ever seen this) beaches to pick from and no more than a handful of people in each area, this was a nice dose of beachtime after our experience in albufeira.

our daytrip to rovinj fueled by truffles