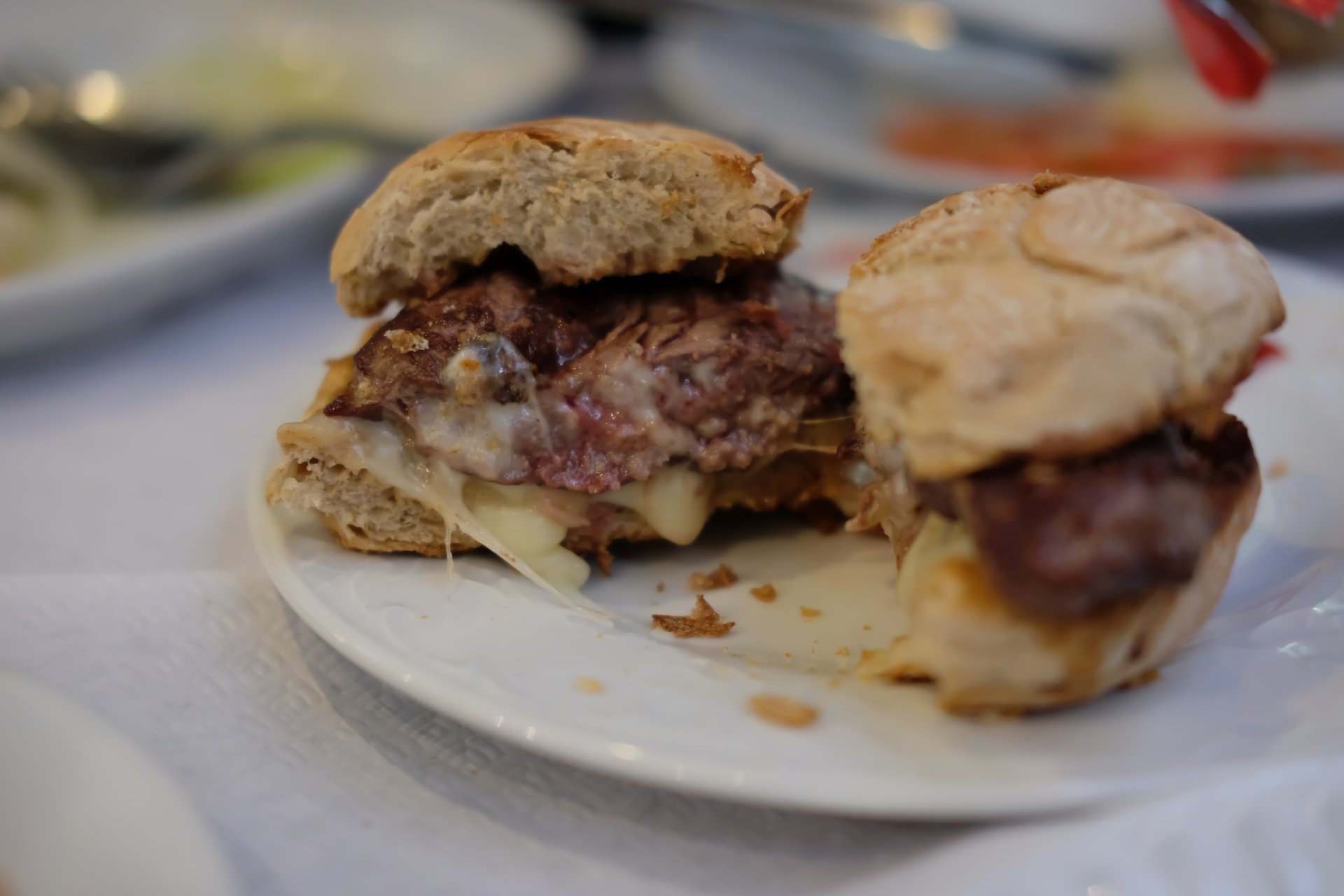 we arrived in porto after a nearly 8 hour travel day from albufeira (2.5 hour drive + 3 hour bus ride with some cab rides in between) and while we had just spent the better portion of a week sitting on beaches, are completely zonked for energy.  with the exception of two really good bbq meals, we’re coming off a relatively bad week for food.  maybe it’s the area, maybe the time of year and maybe the clientele that the region services but the food options were less than stellar.  we weren’t craving anything fancy but we did want meat that tasted like, well, meat 🙂  those of you that have been to china will understand what i mean by that.

our first stop was conga bifana, a shop that’s been in business nearly 40 years.  the sauce that conga uses on their pork sandwiches is a house speciality.  porto is home to the francesinha sandwich (which deserves it’s own post) and the sauce they use on that is the same that they use on their bifanas.  it’s usually a mixture of tomatoes and beer however conga adds some chilis to the mix to give it a nice kick.  at 2 euros each sandwich, the hardest decision is how many to cut yourself off at.

our first dinner was at venham mais 5.  the plan was to get a small snack and to mainly go for dessert since their chocolate cake looked to die for.  we didn’t want anything heavy and venham mais 5 was perfect.  one steak sandwich each; steaks cooked medium rare served dry with a thick chunk of cheese (edam-ish) on a crusty and dense portuguese roll.  when i say dry i mean nothing except the juices of the steak and it was far from dry.  i hadn’t had a steak in quite some time and this is just how i like it.  plain with only the flavour of the beef.  the dessert was another animal in its own right.  it looks like a chocolate cake but it’s actually a chocolate mousse pie/cake texture.  all the sponge-like portions are actually meringue so the whole cake melts in your mouth.  both of us were speechless.  it took all our self control to not order a full cake and eat it without utensils on our walk home.  the sandwiches will only set you back about 3 euro each

on our way back from venham mais 5, we passed by another long standing sandwich stand just down the street.  while porto isn’t overly touristy, this was definitely a locals joint.  twenty-somethings are lined up out the door to get one of three of their pork knuckle/leg sandwiches.  they have plenty of things on the menu but that is literally the only thing that people seem to have in front of them with the exception of alcohol.  the busiest man in the store cuts away at the massive pork leg in front of him sandwich after sandwich.  however, in the interest of keeping the sandwiches fresh and moist, he shaves off about 15 slices at a time which is good for about 5 sandwiches.  when the buns are sufficiently toasted, he’ll take two spatula scoops (not slices) of the soft, creamy round of cheese at his station and smear it all over the bottom side of the bun.  he then scoops up 3-4 pieces of pork per sandwich with one heaping scoop of pork juice to dollop on top of the meat.  he gives it a few seconds to seep into the bread and will press the side of the sandwich against the whole pork leg to drain the excess sauce, then serves it up to the lucky recipient.  a light flavour than the previous two sandwiches got good nonetheless.  some of the juiciest pork that isn’t a fatty cut (by fatty i mean overly fatty such as pork belly).

hello porto.  we love you already.  not only is your food delicious but it’s casual and affordable.