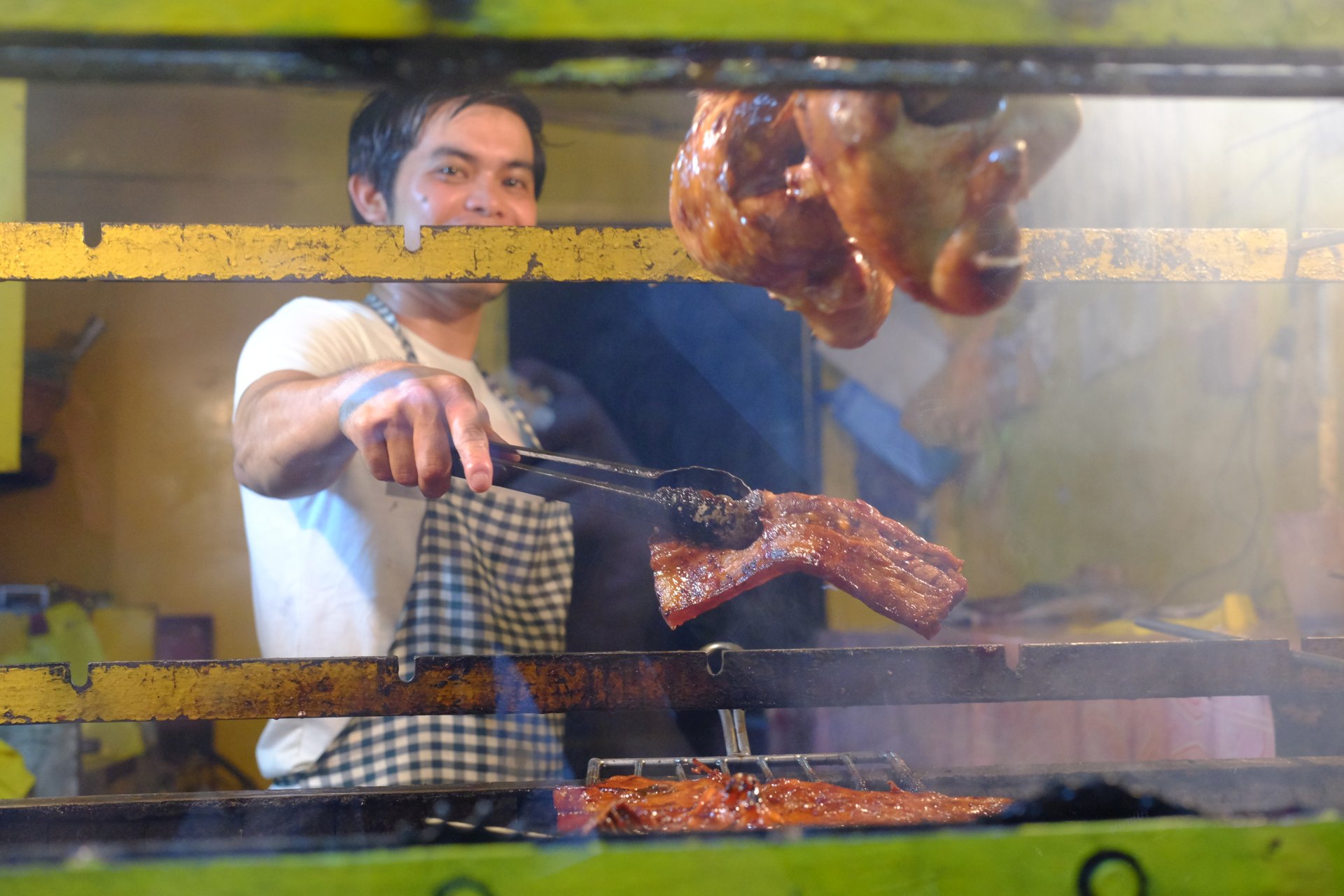 this seems to be a recurring theme for the last few weeks.  we find a great place to eat and have revisted them at least once before leaving the city.  i usually prefer going somewhere different for fear of missing out but i haven’t had regrets over any of the places we’ve gone back to multiple times (matador & afuri ramen, ice monster, gua bao).  i’m not completely sure what this place was called but i’m going to go with ‘heramis’ the first thing we’ve been gunning to eat here has been the lechon (vince, if you’re reading this… i’m SUPER disappointed that i know the only filipino in the world that doesn’t eat this glorious dish).  juicy, succulent roasted pork with crispy skin.  sure, we’ve had siu yok in hong kong but i’ve always thought there have been some subtle differences.  this dinner confirmed it.

we noticed the sign on our afternoon walk through town but didn’t see anything special about the restaurant since there was nothing being cooked.  when we walked by at dinnertime it was a completely different story.  smoke was billowing out from underneath the tiny roof and their small eating area was packed.  since we were on our way to check out another restaurant that does ‘great salads’, i popped in quickly to see what else they had to offer.  “bbq chicken, bbq pork, you sit!” is what i was told.  “no thanks, just looking!”.  i saw a younger white couple in there chowing down on some bbq chicken and they had told me that this was the best bbq in town.  so good that they’ve eaten here every night.  duly noted. so after checking out the salad joint and coming back here we managed to score a few stools and started getting meat thrown onto our plates.   without a doubt we ordered the lechon to start.  there was only enough for one order so we shared that.  there was one bbq chicken so we grabbed that as well.  we weren’t sure what else to fill our plates with since the fried chicken looked less than inspiring.  there were a few pieces of the bone-in short ribs so we ordered those; except they weren’t short ribs.  they were lempio… bbq pork belly sliced to the thickness of maui ribs and basted with bbq sauce.  WHAT?!

the food comes and the pork is downright amazing.  the lechon is thinly cut and has a good meat to fat ratio.  the skin is crispy and we are given a pair of fresh calamansi to drizzle on top of the meat.  even without the calamansi juice, the meat is moist and tender.  completely different than chinese roasted pork which although is moist, has lighter skin and is usually more crunchy.  this lechon had what i can only describe as a juicy crunch to it.  one spoonful of pork and one of white rice.  we’re all happy campers.

we weren’t ready for the next dish.  frank, my pork belly sensei, has even said this was some of the best bbq he’s ever had.  the lempio is cut thinly into 1cm slices with a perfect balance of bone, fat, meat and skin.  by the time the pork has reached us the sauce has dried enough to not overwhelm the rice.  each scoop of rice goes hand in hand with the smokey, sweet bbq sauce.  the little nub of pork skin at the end of each slice has a slightly gummy chew to it but it still melts in your mouth.

in between my two orders of lempio, all i could think of was WHY HAVE I NOT EATEN THIS BEFORE?!?!?!  ROM, I BLAME YOU!!!!

i can’t recall how many orders of meat and rice we added on so we were in the dark when it came time to ask for the bill.  if i recall correctly, it was in the range of 800pp which is about $24cad and stuffed four people up to their necks in food.  we weren’t the only ones who were in love with this place though…

on our way home we grabbed a drink at the bazaar, a small courtyard of shops that serves drinks and westernized dinners at night. it had a very backyard feel to it with recliners, a ping pong table, speaker wires running all over the place and random cats running around looking for attention.  their blended mojitos come in mason jars and are like adult slurpees.

the music playlist was very eclectic and consisted of some 90s hip hop, daft punk, soul funk and a french jammy jams.  and who can say no to kittens?  i feel like haha has audited our travel itinerary to cater to the densest global cat populations.

so over the course of the week, we ended up back at hermanis for dinner three times.  it would have been four but they had run out of food by the time we got back there that night.  there were definitely enough options in el nido however a huge percentage of those were serving up seafood, burgers or italian fare (pasta and pizza).

we also got the roasted chicken one night and were all blown away.  a simple roasted chicken was practically gushing with juice in every bite.  i’ve made my share of beer can chicken low and slow with infusing butter and stock into the breasts and thighs but i never got it this juicy.  to quote frank’s infamous saying “i don’t even like chicken but this is really good chicken”.  although i second the notion, i HAVE heard him say many times during our chicken adventures 😀

el nido, i love you for your beaches but you have to offer up bbq like this for me to come back.  as for breakdown, the lechon was 150pp, lempio 75pp and a whole roasted chicken 230pp.

oh yeah, remember that white couple i mentioned above?  i actually did see them there every night that we walked past.  that’s loyalty.

guilt has overcome me

3 thoughts on “the day i cheated on lechon”