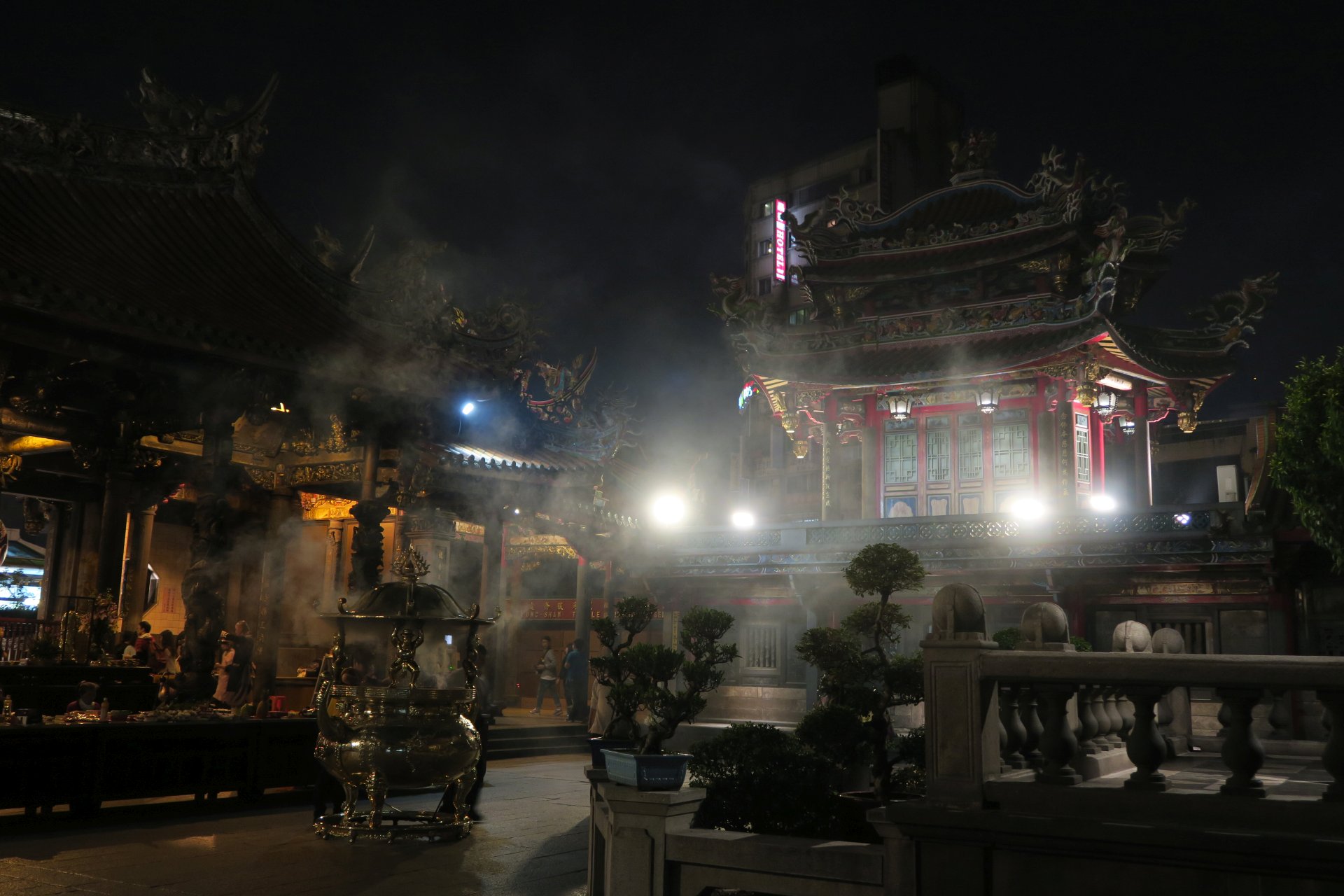 our second night market of the trip was guangzhou night market; very close to our airbnb at the taipei main station.  we heard that this one was quite big and in the area of two more markets so we gave it a go.

one of the first things we picked up was some sort of a tapioca flour dessert.  most of the markets have multiple stands for each type of item but i hadn’t seen this one anywhere else.  the lady making them could only prepare two concurrently and only one of those would be steamed at a time.  the process was pretty cool; a small wooden funnel gets filled up with the tapioca mixture, a spoonful of black sesame or crushed peanuts goes into the middle, more tapioca is added to top up the funnel and then a sprinkle of black sesame/peanuts is added on top.  the steaming takes under a minute and the final product is a hot, spongy cup with just a hint of extra flavour depending on the mix.  for 10nt each, these were very labour intensive; with the girls in front of us ordering over 12 each, we had to reserve a batch and come back to pick them up. we found a black pepper bun stand but also found it challenging to get an order placed there.  we saw two ladies manning the stand there and when we asked for two they replied “no more”.  uh, ok.  we figured that they were sold out and preparing the next batch so we walked around the market to pick up a few more things to nibble on.  when we went back we saw that they had over 20 unbaked buns prepped on the countertop so we asked for two and they replied “sold out”.  what the hell?  after having been to ruifang we clued in that any good black pepper bun stand has their batches fully spoken for before they’ve even been put into the oven.  rookie mistake but now we know!

this market had a large number of stands with all types of stands.  one street of 30+ stands specialized in only seafood, another section focused on toys, another section had games for the kids and off towards the end of the market was a section that had tables available to eat larger orders of food.

on our way out of the market we walked down the shopping arcade and from the get go it felt quite different from the shida market that we went to a few days earlier.  the storefronts were mostly selling clothes, knock off shoes, bags, sex toys with a couple massage (foot and body tables) parlours scattered between them.  there were also a number of restaurants specializing in haha’s favourite animal: not really 😀  i think that we turned around shortly after seeing the second fishtank with a snake in it and b-lined it out of here.  this just goes to show that not all night markets are the same!  we passed the longshan temple on the way back to the mrt station and walked through it since the gates were still open.  this was the long weekend for the *holiday* so the temple was quite busy with people making their offerings to the deceased.  the temple’s decorations were considerably more elaborate compared to those we’ve seen in china, japan and korea.  much more gold accents being used and the figureheads on the rooftops and columns were very intricate: lots of candles and incense being burned throughout all the altars. it’s amazing what a difference a few steps can make.  as we left the temple, we passed through an open area before going underground to the mrt station.  it was like shooting fish in a barrel in this little loop except that instead of a barrel it was a sidewalk and instead of fish there were hookers for as far as the eye could see.  ever the optimist, haha just figured these were well dressed women waiting for their friends.  it seemed like they were extra friendly with all the men who were walking on their own but they could’ve just been asking for directions and men are definitely the best navigators.

all in all, i’d give this night market a pass.  there are some, ahem, nicer areas to check out that aren’t as much of a mess.