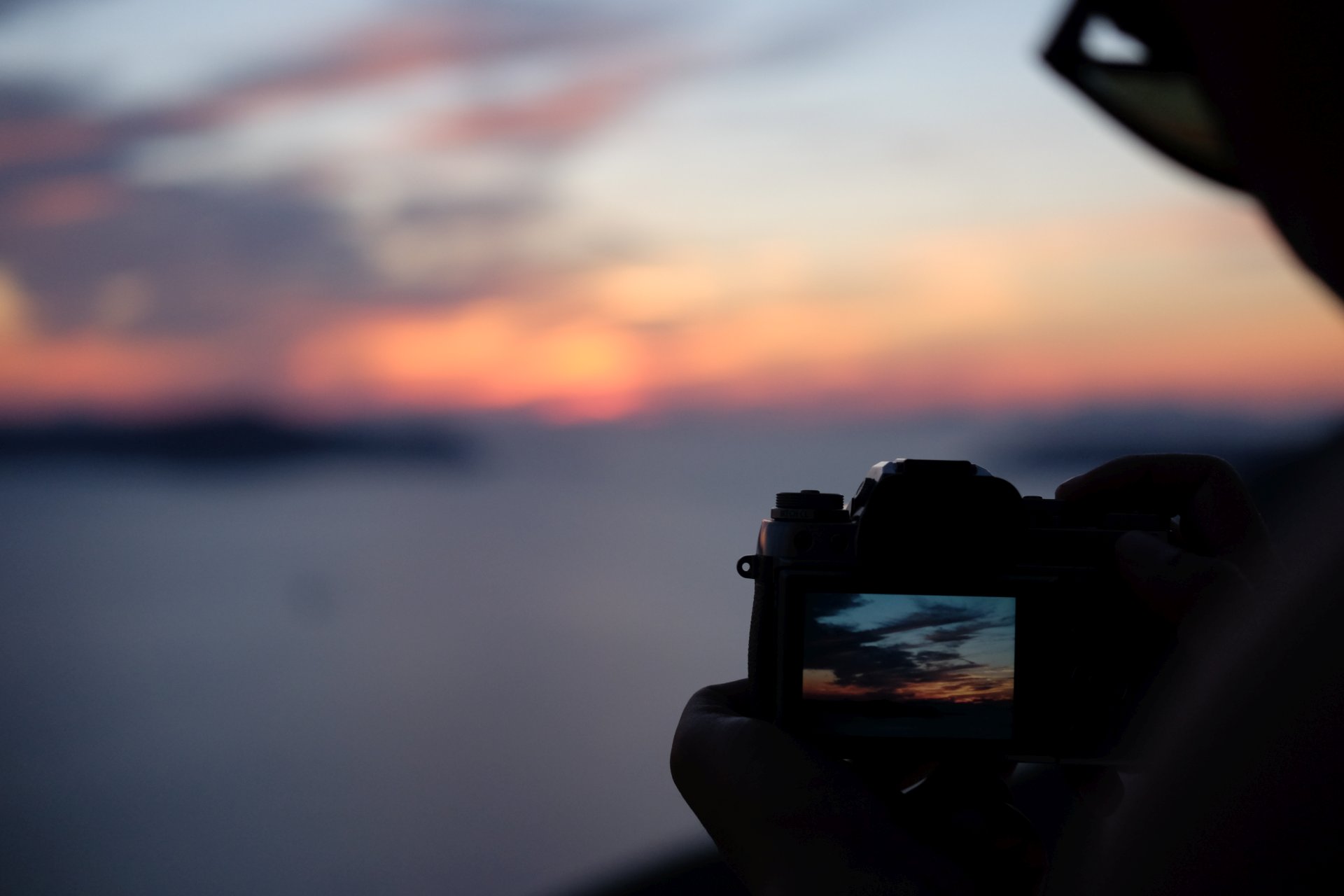 q. favourite meal
a. kapari in fira on santorini. we ended up at this place by chance. the three of us were on our way home from kamari beach and was going to stop before town to check out some low key places for a roasted lamb shank which has been quite difficult to find around town. we asked the bus attendant to let us know which stop to get off for to get to this strip of restaurants and after asking us if we were going there for a hotel or restaurant, shook his head in disappointment when we confirmed our intentions to eat. he recommended a place in fira and after we checked out the menu, i was hestitant as it was a little more upscale plus had views of the water (aka: getting charged a premium just by sitting down). so we tried to go back to the restaurant that we attempted to get into on our first night and once again, they were full. next door to that restaurant was a small, unassuming taverna with a decent menu so we took the plunge… and ended up having a great meal that would’ve cost us half (or less) of what anything on the water would’ve set us bac

the lamb was by far the most tender i’ve ever had without the heavy, dense flavouring that lamb traditionally has. it’s baked in a roasting bag and wrapped a second time with wax paper, sealing in the moisture which looks more like a little wading pool of flavour when you open up the pouch. about the only thing that this dinner was missing was a bigger portion of rice… which we’ll inquire about if we make it back here this week.

q. most memorable moment / best highlight
a. spending the day at the louisiana museum of modern art in humlebaek, north of copenhagen. since pairing up with haha, i’ve been to my share of museums with my favourites being the smaller, intimate ones in paris (in particular, the rodin & marmottan monet). this musem was like nothing i’ve been to in the past. it was in the middle of a residential neighbourhood out in the suburbs of copenhagen and was relaxing, casual yet very organized and well thought out. this deserves a post on it’s own as it is how we’ll be remembering copenhagen; absolutely a world class museum without being pretentious in the least. and for a city that will bleed your wallet dry, admission was less than my dinner at the street food market!

q. greatest challenge
a. trying to make it out of denmark without blowing our budget out of the water. we’ve been quite good about eating and travelling within our means with the occasional splurge meal however literally everything in copenhagen was at least twice the price of something similar in portugal & spain. i mean, small bottles of water were $3.50 cad. schwarma/donair wraps were $12 cad. sit down dinners started in the $30 range for entrees alone with many of them being far higher than that. beers were $12+. eating on a ‘budget’ is a relative term in denmark and those meals are still in the $20 range for something simple. we had an amazing kitchen setup in our airbnb as our host seemed to be a well versed cook/baker; fully stocked spices, knives, cutting boards and tri-ply cookware in every drawer we opened. so our last meal in copenhagen was a budget pasta meal that we threw together… and it still ran us $25! 😀

q. what i miss most from home
a. bbq season. it’s about that time in the year where we can throw some meat on someone else’s grill (since apartment living has left us balcony-less).

q. next stop
a. sarande, albania

q. weirdest observation about current culture
a. the cost. while far from being as expensive as denmark and on par/slightly cheaper than barcelona, santorini hasn’t been as cheap as i thought it would be for a country with its economy in the proverbial shitter. granted, it is one of the most popular destinations in greece and the flow of people doesn’t look to be slowing down anytime soon.  our accomodation pricing was very reasonable as was our flight in through athens so there’s definitely a way to do this island on a budget.   leaving here for corfu was also ridiculously cheap at $90 for our two-leg flight.  granted, we leave santorini at 11pm and spend a four hour layover in athens airport and arrive in corfu at 6am.  the next cheapest flight was over 3x as expensive.  is it worth it?  who knows… find out next week.

q. one tip i would give myself if i were to come back
a. as beautiful as it is, i don’t think i’d revisit santorini. however i would definitely want to spend more time island hopping in greece. the waters are so amazingly clear, the temperature is hot and not too humid and the food is delicious.  i’d just prefer to get into some quieter areas of the country.

q. friends i’ve hung out with/visitors
a. my parents in denmark. in santorini we met up with my snowboarding partner in crime, jp, who was with us at the start of this trip in hokkaido. he’s halfway through his own europe trip and somehow we managed to get our dates to work for santorini. somewhat amazing since neither of us had our flights to greece booked even a month ago! a little nerve-wracking at times but being flexible has worked out quite well.

q. one random/weird/cool thing i learned about the country i’m staying in
a. greek bus drivers. don’t. give. a. f*ck. we left portugal before we got involved in any motor vehicle accidents and ended up in copenhagen which has about 99% of it’s roadways filled with rule abiding bikers. enter santorini, an island with tiny towns and narrow laneways filled with thousands of waddling tourists gazing in every direction except in front of them. well, the bus drivers here must be desensitized to how much people value their lives because they’re rounding 90 degree corners without slowing down, speeding up around blind corners and reversing into bus stops PACKED with people with less than a few feet of wiggle room. with every city that we find ourselves in, i’m realizing that north america drivers suck. the ratio of pristine:damaged cars is definitely not indicative of driving skill. no wonder most f1 drivers are european… they probably trained as bus & taxi drivers.

q. one new experience/memory that will stick with me
a. a compilation of standing in the waters off of whichever beach we’ve found ourselves at over the last six weeks. standing there in the hot/cold/warm waters of the south china sea/atlantic ocean/aegean sea has given me a lot of new perspective on summertime travel. the varying textures and colours of the sands, the different friends we’ve found ourselves spending those beach days with and the different vibes that each one has had. barring early onset alzheimers, i hope to remember those moments for a very long time.

q. portion of luggage that’s been the most & least useful
a. maybe my luggage itself. having met up with my parents in copenhagen, both of us were able to offload some gear to them to lighten our loads. i know i’ve complained in the past about my bag being too large when expanded but had it not been for that expansion, i wouldn’t had to throw out all those clothes that i would’ve sent home. a blessing in disguise and this carry-on has served me well this trip, holding up to the snow of japan, hills of korea, gravel of the phillipines, trains of spain and the stairs of lisbon. my backpack has been equally handy, holding up to full days of snowboarding, protecting my electronics for the last four months while in transit and at the same time, not being too bulky to use as a day pack when we’re exploring cities. least useful at this point would be my long socks. i only have two pairs of them but if i use anything less than twice in a week, it’s got a place on my ‘soon-to-be-dumped’ list.

meeting up with my parents in copenhagen