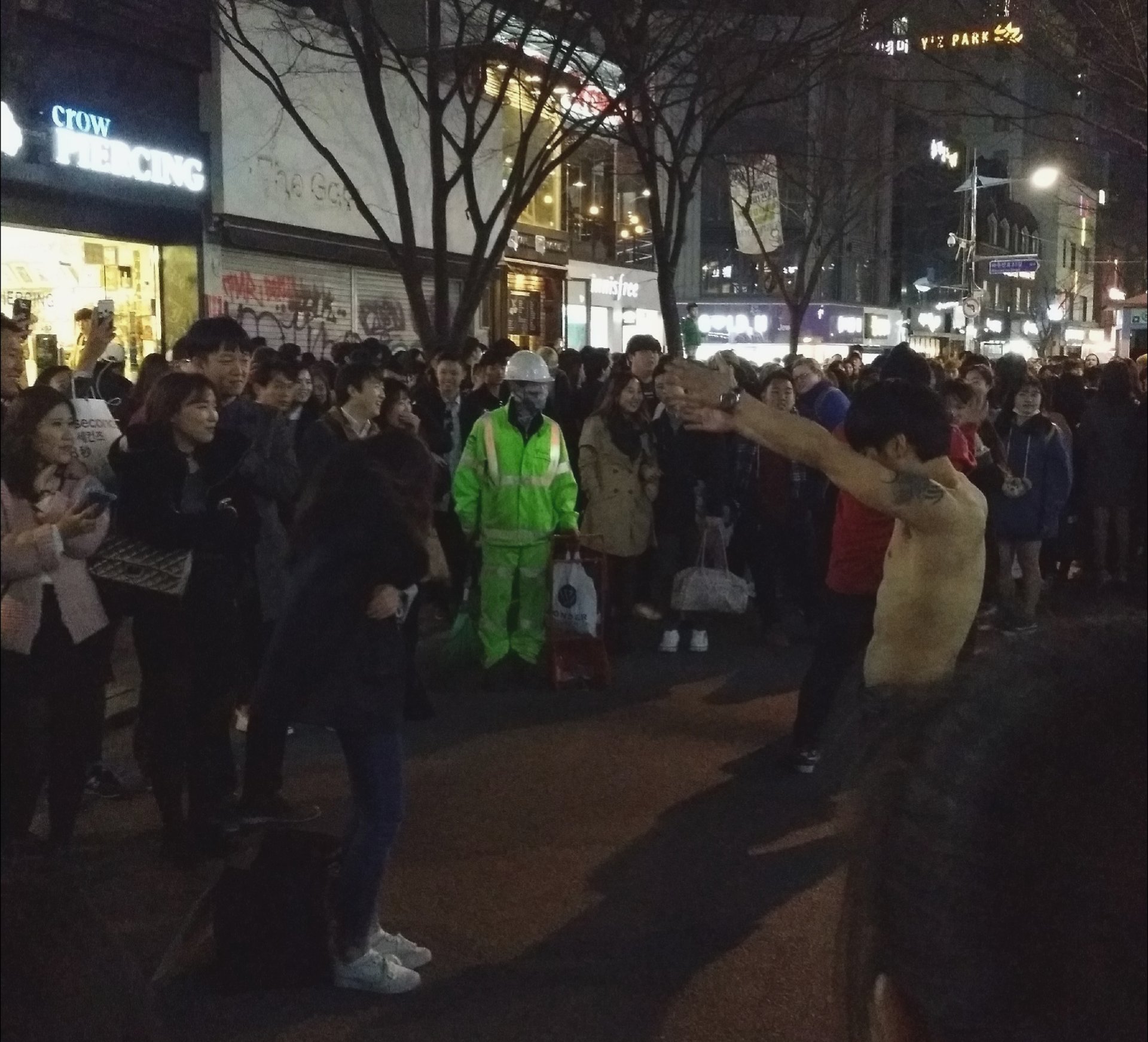 q. current home/addy where i stayed (neighbourhood) and how long
a. tokyo (airbnb in shibuya/harajuku), seoul (airbnb in itaewon)

q. favourite meal
a. our build-your-own-lunch at the tongin market in seoul.  for a mere 5000won (~$6 cad), you get 10 tokens and a bento box which you can fill at the numerous stands that line the market’s narrow corridors.  most items are two tokens with some only being one so you can get a pretty good spread.  i doubled up on a my meat-wrapped rice cakes but hey, no regrets right?

q. most memorable moment / best highlight
a. spending the afternoon/evening in hongdae and experiencing kpop culture firsthand.  the whole area has energy and is packed with all sorts of food, street art and shopping attractions.  in the afternoon you can see performers setting up and staking out their spots but night time is where the area comes alive.   singers, guitarists, magicians, boy and girl dancing groups, rappers and even some beatboxers line the streets and the crowds pack in for the show.  the boy bands dancing to female kpop is pretty awesome.  half naked guys serenading girls they’ve picked out from the crowd?  priceless.

q. greatest challenge
a. the culture shock of the japan to korea transition.  let’s just say that the people and the city are considerably different in terms of how both present themselves.  we’ve run into problems (albeit minor) with a plethora of things like trains and maps and have had to get used to inefficiency again.  oh, and i also find myself asking “WHY?” on numerous occasions.  that deserves a post on it’s own.

q. what i miss most from home
a. sal y limon tacos.  i’ve missed our regular restaurants quite a bit this trip but seoul is big on ex-pat food.  when i say big i actually mean that i think foreign food is more accessible than local fare.  within a 2 minute walk of our airbnb i can count 4 taco shops and 3 churro stands.  churro stands are all over the touristy areas as well.  the #1 rated restaurant for seoul on tripadvisor is mexican.  it’s our second last day in seoul at this point and i’ve managed to fight of all the cravings.  sal y limon, i will remain loyal to you unless the tacos are made by fellow brown people.

q. next stop
a. taiwan in two days

q. weirdest observation about current culture
a. the vanity.  holy crap the vanity is mind boggling.  hands down the vainest culture i have seen.  random selfies being taken everywhere, girls doing makeup on escalators and lineups from the bathrooms to the walking areas in the subway station where you can see girls doing their makeup.  i’m not one to pry into other peoples’ business but girls everywhere are walking like slugs because they just have to snap another selfie of themselves in the train station.  i was lining up for a food stand in dingy tongin market and the girl behind me took at least 15 selfies in that 10 minutes.

q. one tip i would give myself if i were to come back
a. come during late spring/early summer.  humidity might be an issue but we’ve felt that it’s been just a little too cold to enjoy everything this city has to offer.  eating out on the streets/patios, walking through the open markets, spending a day at the nearby mountains; all of it is doable now but once the sun is gone or the wind kicks up, it gets cold in a hurry.  all in all, i might opt for busan on my next trip back to korea to get away from the cultural extremes of the locals and the massive ex-pat/american army population.

q. friends i’ve hung out with/visitors
a. kakuni and their two boys on our last day in tokyo.  it’s literally been years since i’ve seen kayo and the boys and our trips overlapped by a little bit so we got to hang out for an afternoon q. one random/weird/cool thing i learned about the country i’m staying in
a. seoul is more like china that it is like japan.  it’s rough around the edges (not in an unsafe way but in a sense of polish) and although there are areas that look posh, there’s the sense that it’s strictly in appearance.  the people are very friendly and seem like they’re generally enjoying life (as opposed to the japanese that live the robotic life).  the streets have more atmosphere and the density gives a lot of options for whatever it is that you’re looking for.  i’m blown away that the ex-pat population is so glaringly apparent here though.  it almost seems like they live in their own little bubble.

q. one new experience/memory that will stick with me
a. tongin market for lunch was awesome.  incredibly cheap, great food and we were surrounded by locals for the most part.  no glitzy buildings, just small businesses that have been there for years, serving up their specialties week in and week out.  great food as well and you can customize your box which is the best part.

q. portion of luggage that’s been the most & least useful
a.  flannel shirt.  it’s served me well for winter duties along with my hoody and i suppose it’s done such a good job that haha has now pilfered it for this seoul leg.  hey, they’re quite big dressing alike here, we’re just fitting in.  least useful would be my gopro post-hokkaido.  i keep meaning to play around with using that as our camera going forward but i keep forgetting this 2 inch camera at home.  i think that living out of a bag is starting to drain me mentally.