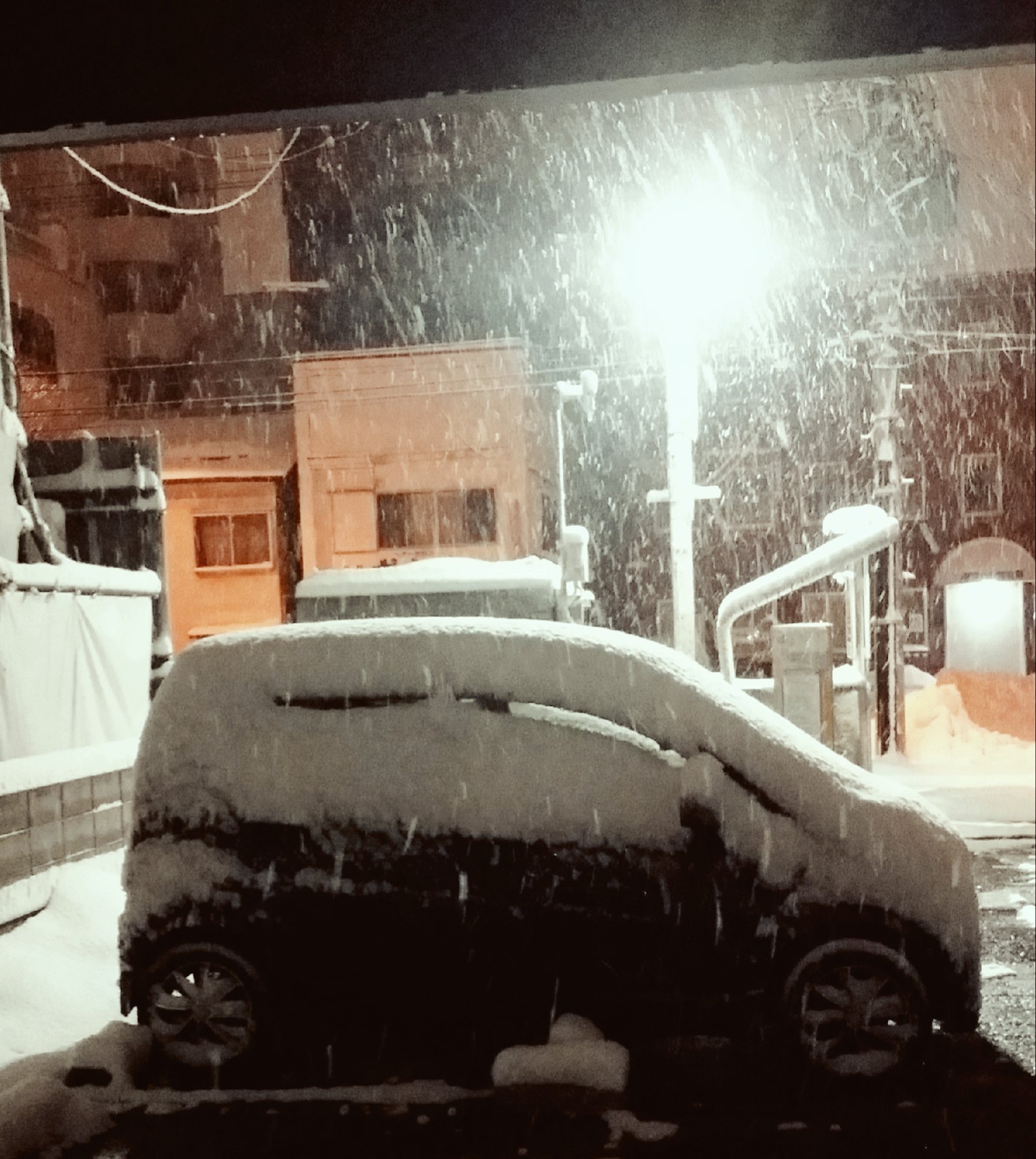 talk about a hectic morning.  last sunday was our checkout from sapporo and checkin at otaru however the snow forecast had a sizable dump coming to all of the coastal mountains around sapporo.  as the winds were coming in from the northwest, kiroro sits on the edge of the sea of japan so it was decided that we’d checkout extra early and try to get a day in up at kiroro.  i came back from teine at 5pm, slept at 9pm, set the alarms for 430-5am and was greeted with 5-10cm of overnight (and still falling) snow

5-10cm were on the roads and no plows were out yet so we started the slow, 9 block slog to the station.  things didn’t start as smoothly as we hoped; it turns out that rolling luggage and snowboard bags tend to act as a bulldozer and scrape up all the snow in its path.  i remember looking back and wanting to take a picture of the 30 foot stretch of visible pavement behind me but honestly i was too sweaty and exhausted to reach for my camera.  we got about a block before we started waving down a cab in a nearby alleyway but he wasn’t interested in what we had to offer so onward we went…  as soon as we stuck our heads down to get moving, of course a taxi flies right by us.  arrrgh!  nevertheless, we pushed on.  one block later, the cab we tried to flag down earlier picked us up,  luggage and all and shuttled our sweaty selves to the jr station.  best 670 yen ever spent,  he even had a chuckle as we were bowing and thanking him profusely.  so here we are at the jr station, ready to board the train and expecting it to be pretty quiet since it’s 615am on a Sunday morning.

low and behold it was a fully packed train on departure.  if you haven’t travelled in asia before, here’s a tip: don’t take the subway with more than one piece of light luggage.  and here we are with 5 bags in total including a 45lb snowboard bag.  lady luck was on our side and we were able to monopolize the handicap area (how fitting) but since we had rollers on all of the bags, I had to sit on the luggage to make sure it didn’t decapitate the old man who was sitting perpendicular to my board bag (who somehow fell into a deep sleep the moment the train started moving).

so we get to otaru on time,  haul our luggage down the heated sidewalk (yay!) to the smile hotel and drop everything off before i head out.  in my haste, i had forgotten to reserve a spot on the earlier public bus (970yen) so I opted to take the free first-come-first-served kiroro shuttle bus since i had about 40 minutes to lineup early.  after a hectic and worry-filled 15 minutes through two train stations, i round the corner at my destination to get a glimpse of the bus stop and….. nobody there. not a soul.  what. the. heck.  at this point i’m wondering if i’m even in the right spot because kiroro’s website has two pages detailing bus schedules and the 830 shuttle was only listed on one of them.  10 minutes later i see a group of elderly people march out into the snow to lineup.  i follow them blindly and by the time the kiroro shuttle shows up, there are a mere 8 people alongside me.  sweet!

the driver arrives 5 minutes early and decides to shovels snow from the pickup point while he waits for potential arrivals.  i would love to see a translink employee do that lol

the drive up to kiroro is essentially switchback after switchback. all you see is snow and obscene amounts of it.  even the 10 foot diagonally mounted snow barricades that are jutting out the sides of the hill have over 5 feet of snow spilling over the top of them.  i’m giddy.

*there’s a bit of a backstory to the kiroro trip as jp and nick had planned an overnight to it from sapporo.  after cabbing it to the jr station and purchasing their train ticket to otaru, they were turned away from the subway for not having board bags.  so kiroro has been the forbidden fruit of our trip up until today

we arrive at our destination and there is no cruddy, smelly lodge here.  no, instead we’re deposited into the lobby of the very fragrant sheraton.  the lineup and ticketing area is bigger than that of whistler’s; 10 tellers are working with someone directing foot traffic and then lineup for tickets is a consistent 20 people deep.  uh oh.  i replayed flashbacks of gongshow lift lines and a mad dash to hit your pow stashes fast and furiously except that this was my first day here and i have the directional sense of a lost puppy.  i  can almost taste vomit in my mouth.

i enter the gondola line and there’s barely 20 people for the start of the morning. not bad at all.  up, up, up and continually up we go.  before long the cabin is foggy and I lose sight of the snow and trees beneath us… until we come out at the top.  only then do I realize that the clouds have rolled in so thick and we could barely see 20 feet in front of us.  the rollercoaster of emotions continue.  within 2 minutes i found a sweet stash of powder and within another 2 minutes i found myself hiking out of a trench after the fall line flattened out.  it’s ok..  stay positive.. good things shall come.  after some poking around on some smaller chairs i’ve settled into the fact that i’m looking too hard since my days at furano and kamui were letdowns.  i fall back on my whistler training and start looking for tree lines on the lower half of the mountain.  i scout out the sections for flats and gullies,  take a few runs down and things are back to normal.  dry, hokkaido powder has returned.  it feels like whistler pow in terms of the base but it’s as dry as it comes.  the next run up i find a section called ‘powder zone’  with a gate.  upon walking up to it, I find it manned by ski patrol and it is off limits to the general public until 11am.

wut dah heo?!?!  patrol tells me that by paying the mountain an additional 8000yen for the season, you get all these perks for privileged riding but only on select dates. bizarre. so i poke and prod about it and before long, one patroller offers to show me a little stash of his while reinforcing that ‘we’re good as long as you don’t duck any ropes’.  always responsible 🙂  so we ride up against a rope line, wait till it’s finished and cross into the section that the rope was initially blocking off.  he then looks at me and with an affirmative stare, says “see, no ropes, right?’.  i smile and nod.  he then points me down a face that only he has ridden down, so there are two tracks over about a 500 ft wide face.  he guides me to one side and after i lay down the best turns of the day,  he yells at me to come back his way since it’s completely fresh  on the opposite side.  thumbs up to the coolest ski patroller i’ve ever come across.  that’s him in the green jacket at 14 seconds in:

i lay the board back as much as i have this trip and at two points only my tail is touching the snow yet i’m flying down with powder sprays on either side of me.  much of this trip has been spent in the trees due to the heavy dumps and this is a nice change of terrain.  i lap this section 4 more times, once even crossing into the official powder zone as soon as it opened to the public but the snow there has been ripped up by the elitists and there’s no sense in straying from a good thing when you see it.  eventually i explore another path down this chair,  find enough stashes to completely cake myself with snow by the time I’m back at the chair and i run into a similarly snowy aussie skier at the lineup.  we share the same ear to ear grin and exchange stories on the lift.  he’s spent a season at nearby niseko and has been here three days.  i pick his brain for any new areas and he fills me in on the lack of gullies in this one area we’re in so i spent the rest of the afternoon picking a new line every run, each with seemingly better snow than the last.

i call it a short day at 2pm as my free shuttle leaves for otaru at 215pm.  this is my last run,  the only other tracks in this area are my own and the aussie skier.

i had only intended for today to be a recon day as this is the first of a week long stay in otaru and kiroro has a ton going for it as of today.  easy and cheap transit (420yen round trip via jr + free shuttle), good pricing on tickets at 4300yen for a 5 hr pass, nearly nonexistent crowds considering there was fresh snow on a sunday and a solid mix of wide open faces and tree runs.  i showed up late on a weekend and rode fresh lines for 4 out of the 4.5 hours i was there without zero hiking.  and this is with the top half of the mountain left for dead due to visibility.  i can’t wait to see how this week pans out.

from asahikawa to furano in search of the great dump

a lazy sunday at sapporo teine