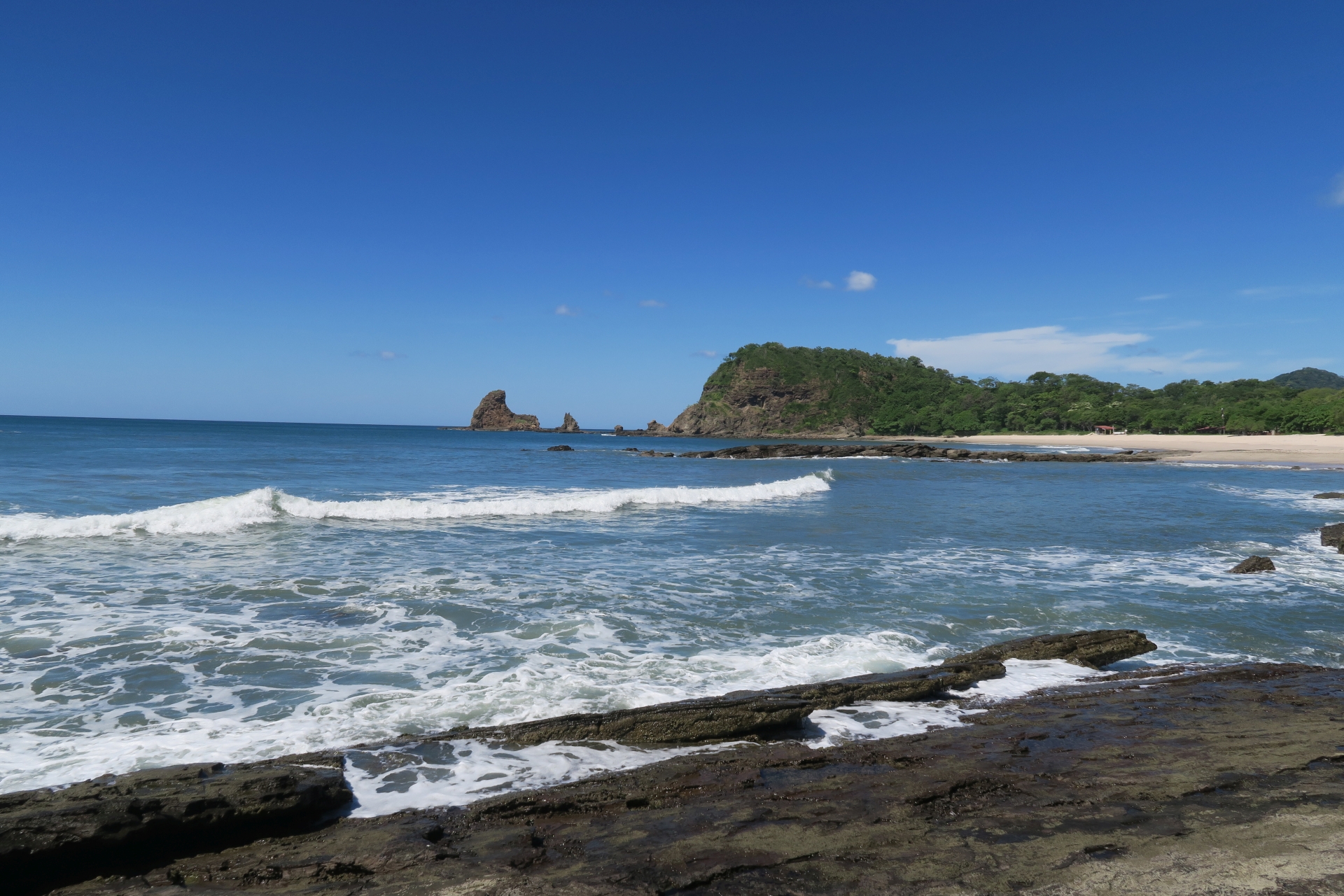 q. favourite meal
a. chicken quesadillas in a beach shack at the far end of playa maderas. there were about 10 things on the menu but the owner was only cooking one thing on this day, so quesadillas it was! i never order quesadillas because back home they closely resemble a depressed pancake; generally not a lot of substance but this was was stuffed with so much chicken and cheese that we still had plenty of leftovers to share with the local cats. we spent the whole day at a nearly deserted beach and went back to this shack for seconds and thirds to avoid having to eat another boring meal at our hotel. (most of the eating options are in san juan del sur which is a 45 minute walk away down a dirt road)

q. most memorable moment / best highlight
a. hiking to the san ramon waterfall and being able to stand underneath to reap the cold, refreshing rewards of our two hour hike. the waterfall is situated about halfway up the inactive volcano of maderas on ometepe island and is a majestic sight to take in. quickly circulating clouds, moss covered walls, large volumes of gushing water being driven over the edge and almost 100 ft down before landing in the small pool at the bottom of the cliff. we lucked out and were able to get through most of the hike before the heavy rains came but this would definitely be the season that you want to be hiking the waterfall. any earlier in the rainy season and the path would be very slippery and muddy. any later into the dry season and the waterfall would be dried up. as i stood there, staring up at the peak of the waterfall and following its path before it landed at my feet, i couldn’t help but smile for no reason in particular but also because of everything surrounding me.

q. greatest challenge
a. bathroom issues plague us. our toilet in playa maderas broke which means we have to pull the plunger manually; kind of a pain in the ass but nothing we haven’t done before. our shower issues have been a bit more problematic. on two occasions in ometepe, each of us experienced the knob falling off of the piping and we got blasted with a vicious stream of cold water. a pretty serious wake-up call in the morning. on the plus side, the water pressure was amazing.

on a more serious note, my laptop has officially started breaking down. my usb ports will randomly decide to not work, my memory card doesn’t get detected sometimes and now my wifi card has magically disappeared/melted. i want to blame myself for buying something that was made in china but then again, what choices do we really have nowadays?

q. what i miss most from home
a. sitting outside without being mistaken for a buffet to wandering mosquitos.

q. next stop
a. laguna de apoyo, another volcanic lake. we were going to go there before ometepe but the weather didn’t look great. this worked out even better in the end because now we’re breaking up an 8 hour travel day by traveling from the pacific side to apoyo.

q. weirdest observation about current culture
a. perhaps not so much about current culture as it is about the visitors but i can’t believe how many canadians are down here. i would say that at least 3/4 of the travelers we meet are from canada with a large number of them being from bc. we’ve now met two couples who live in our old neighbourhood of the west end and surprisingly, many of them are making their first trip to central america. maybe it’s timing, maybe it was the seat sale from yvrdeals.ca or maybe central america is just an awesome place to travel. i’m not discounting the third possibility.

q. one tip i would give myself if i were to come back
a. playa maderas is a must visit not only for surfers but for anybody who wants a chill beach vaction. amenities range from basic & affordable to cozy (village playa maderas) to boutique (hula kai). the sand is gorgeously fine, water is hot, surf is consistent and it’s very laid back. maderas is one of the smaller beaches in the vicinity of the very popular town of san juan del sur and i feel that it’s the perfect mix of being close enough to the city that getting supplies & groceries isn’t a pain in the ass yet far enough away that it’s still very secluded aside from the main surfing area. one thing to note about distance from town is how expensive things can be; playa gigante has turned up high on peoples’ beach destination recommendations but because it’s an hour’s ride away from a grocery store, everything is inflated and vistors are gouged on prices on everything from food to accomodation. the next time i come back, i’ll be damn sure that i’m a decent enough swimmer to be able to surf. for the record, i did scour the net on if it would be responsible of me to try to learn surfing on small waves even though i can barely swim and not a single reply was supportive. one answer seemed to sum it up pretty good ‘you can but you’ll probably only surf once’. advice taken.

q. friends i’ve hung out with/visitors
a. still just ourselves but we spent three days on ometepe tagging along with a dutch couple and their two incredibly cute kids as well as a group of albertans & british columbians on daytrips and hikes. ometepe is tiny with only one road and there are only so many things to do on the island which means a whole lot of running into other travelers.

q. one random/weird/cool thing i learned about the country i’m staying in
a. alcohol is not sold on good friday, easter sunday and during elections. flor de cana rum is the pride and glory of the country and happens to be dirt cheap and available everywhere for next to nothing… if you can buy it. i thought that maybe alcohol wasn’t sold on sundays when i tried to buy a bottle for the beach but apparently it’s just that the government wants people to be voting while sober.

q. one new experience/memory that will stick with me
a. visiting the island of ometepe. we waffled a lot on visiting the island because we knew we wouldn’t be doing any of the two volcano hikes (8 & 14 hours respectively and quite vertical & challenging) but i’m very happy that we made it over for at least a few days. the island is situated in lake ***cocilba***, the second biggest lake in latin america and is a completely detached community from the rest of the country. the whole island is a community and although rustic and impoverished, the locals wear smiles on their face proudly. the island has two controlled entry points where ferries drop off and pick up passengers and all visitors have their ids recorded (although one could simply give them a name of ‘scrooge mcduck’ as they don’t even check) by the port staff. the island is home to volcanos concepcion and madera and you can see every detail in their varying terrain; one is a cloud forest and the other is a dry, ashy & active volcano. the local economy is feuled by farming, mainly plantains, and tourism is a big influx of cash into an otherwise impoverished island. there’s something so naturally basic about ometepe. the brick road on the west of the island. the dirt road on the east of the island. livestock roaming the roads on their own. small communities spanning 10 houses along the one shared road. children playing soccer in the mud in their bare feet. i talked with one of the kids who worked at our hotel; he’s lived his whole life on the island, been to managua just once and didn’t like the hectic pace of city life and dreams of visiting countries such as the usa and costa rica which is less than two hours away. the reality for many nicarguans is that they don’t have the means to travel due to visa restrictions in addition to the cost. the irony that i find in that is that many expats have made ometepe their home after visiting and discovering the want for a simpler life. it’s a beautiful island and a very (enjoyable) departure from the touristic nature of granada and any spending on the island does go directly back into the community.

*the part of me that appreciated ometepe is the same part that fell in love with lake atitlan in guatemala. on it’s own, ometepe is an oasis of rustic serenity however for me, it’s charm is unfortunately overshadowed by atitlan. if you google ‘most beautiful lake in the world’, it’s no mistake that atitlan has been dubbed just that by many. three volcanos, lancha ferries, sunsets gleaming down on the water and over the hillsides… it’s a pretty magical place.

q. portion of luggage that’s been the most & least useful
a. microfiber towel. now that we’re into tropical temperatures, this towel has been awesome. it was a little price but at maybe 1/8th the size of a regular towel when folded up, i will forever be traveling with one. as for least useful, i’ve used my gopro for a total of one kayak ride this trip. i hate this goddamn thing.