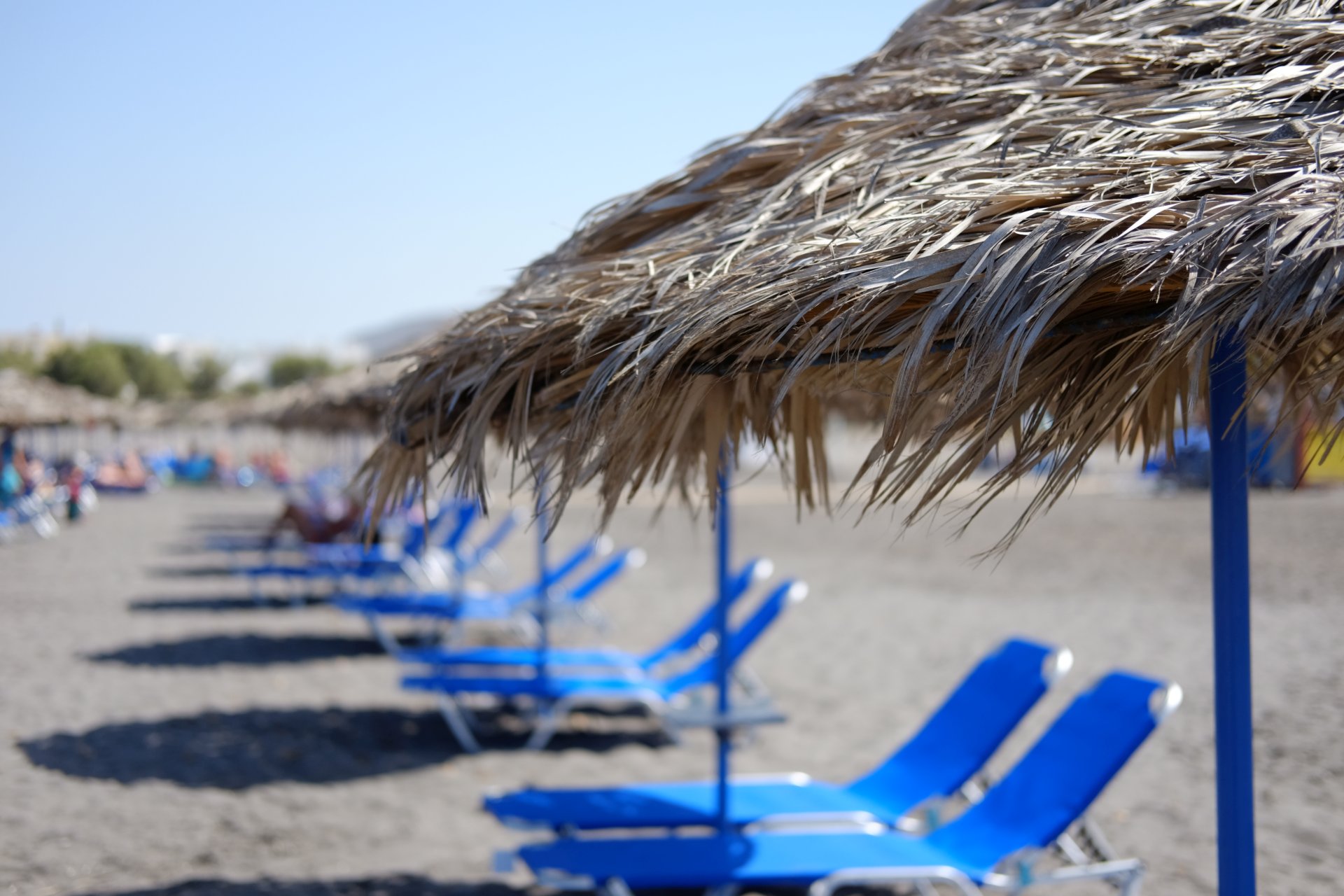 we heard that santorini didn’t have great beaches but we had to find out for ourselves and compare it to those of portugal and the philippines.  all of the ones below except for cape coloumbo were accessible by buses which depart from fira, starting with the ones that we visited.

-monolithos – next to the airport, fine black/grey sand, very calm waters on the right side and more pebbly & wavy on the left side of the getty.  very quiet and quaint, not commercialized.  renting 2 lounge chairs + umbrella is 7euros.  close to the flight path but quite loud.  we spent our first full day here with jp and while there wasn’t a whole lot going on, it was a nice way to get acquainted with the island.  it definitely looks like some work is being done to develop this beach further as some cranes were out in the distance.

-kamari – commercial, supposed to be more relaxed but we found it slightly annoying with the number of hawkers out there trying to sell you stuff while you’re on the beach.  if you sit eat at a restaurant with umbrellas they’ll give you the chairs & umbrella for free.  food is roughly 10-15euro each.  black pebble beach.  we had the pleasure of sitting near a group of obnoxious brits who would say derogatory things to their asian masseuse, make attempts to buy cocaine from strangers and be allaround douchenuggets the rest of the time.

-perissa – very built up as well.  tons of places to eat, free umbrellas when you dine as well.  it was dead when we went but i can see it getting crazy there especially at night.  the patios are much nicer and more of a beach bum vibe as opposed to kamari’s tourist vibe (although realistically it’s an island full of tourists).  jet skiing and paragliding available here.  calm waters too, maybe an in between of kamari and monolithos’ tide.  lots of variety of lounge chairs and the ones we scooped up were as large as some beds we stayed on in japan, no joke.  this was also the day that we had planned to watch the sunset at oia which involved about another hour of bus travel but we fell asleep in our comfy chairs for longer than expected.

-cape de coloumbo – black pebble beach mixed with sand. need a car/atv to get here.  on the north east shore and we loved it here to get away from everything and everyone for an afternoon.  very secluded, we were the only people in the whole strip though.  it’s the least maintained which i thought was part of its charm.  no facilities for the most part so you need to bring towels and sit either in an alcove or away from the jagged rock cliffs as they’ve been known to fall randomly.  there is also one group of lounge chairs on the westward side of the beach.  should be the quietest beach on the island.  strong waves and can get windy.  if you do come here and you’re driving north from thira, you can park at either the restaurant where the road makes a sharp ‘u’ or if you pass the restaurant, there’s an area you can pull over as the road heads westwards, a few hundred feet down.  easier to get to the beach from this parking spot

-red beach – near akrotiri, red coloured cliffs overlooking a black pebble beach & beautiful aquamarine waters.  if you’re at the ruins and have 30 mins to kill, walk here and take some pictures but it’s not worth a trip out there for it.  there’s so much garbage that the beach has been ruined.  really a shame.  salvaged this trip by picking up a bag of peaches near the beach and walking back with it to the bus stop by the marina.  the water there was relatively calm, crystal clear and warm.  i think we skipped a few buses and hung out there for an hour or two.  so yeah… red beach = yuck.

-exo gialos on the east side of the island. is supposed to have a very swanky restaurant with comfy seating actually ‘on’ the beach.  we didn’t make it here but would’ve liked to check it out

overall, we really enjoyed the beaches of santorini.  they’re not exactly luxurious and the sand isn’t fine (with the exception of monolithos) but the water is crystal clear and quite warm.  i have to assume that their pricepoints are also what brings the people in since tourism is the country’s cashcow at the moment.  can’t ask for much else, especially with the beaches being so empty just a few weeks before the summer rush hits.