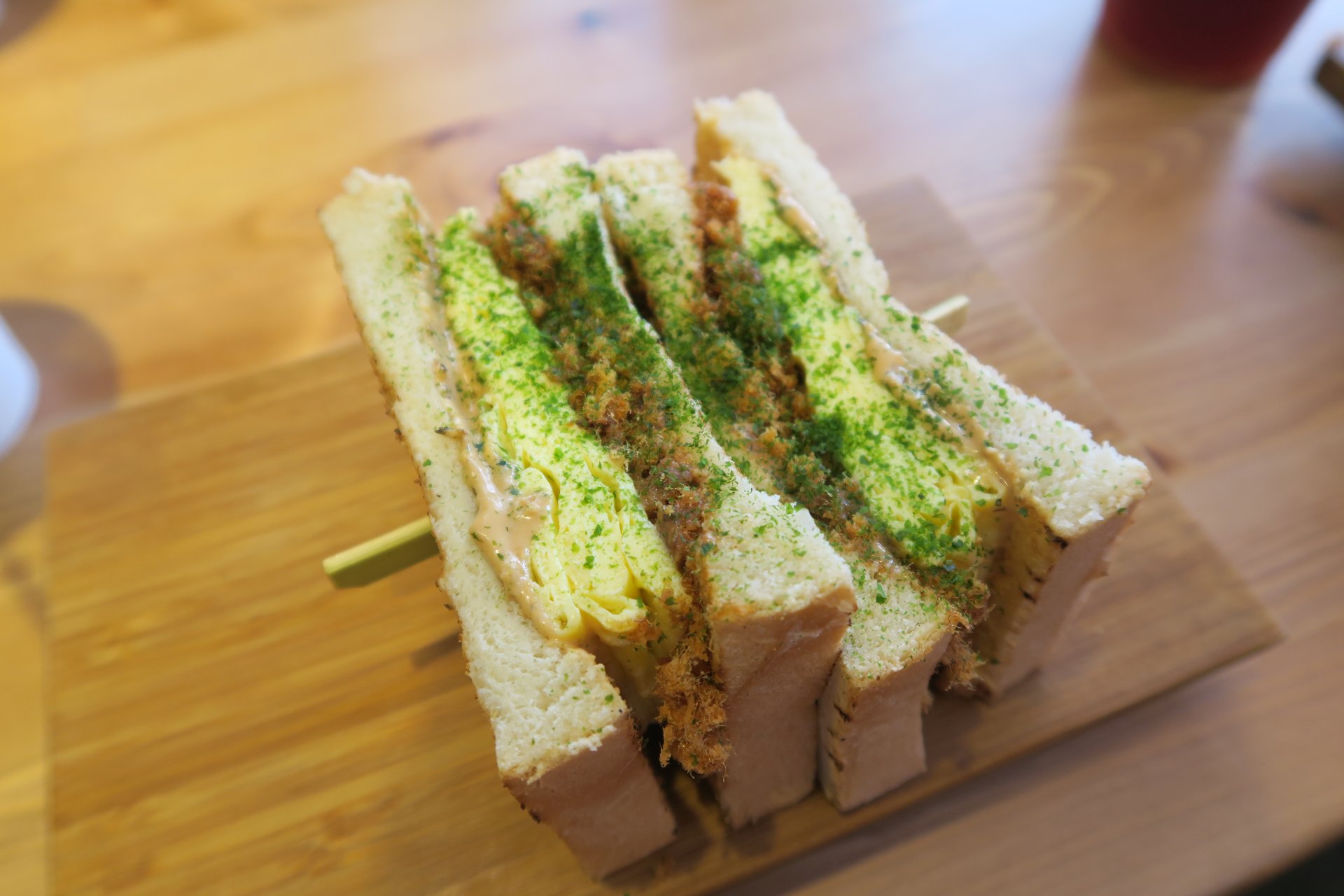 maybe the biggest change in culture from japan & korea to taiwan is the inclusion of breakfast as a regular meal.  the majority of breakfast options in japan were western style which generally included eggs, toast and minature sausages of the cocktail-weinie type.  a traditional korean breakfast is typically not so different from their dinner (which is typically not so different from all their other food, just orange, orange, orange with kimchi on the side) so i was never craving breakfast.

as one of my three favourite meals of the day, i’m in love with taiwan’s breakfast options.  you have your western style diners here as well as the waffle culture going on but since we only had just over a week, we’ve opted for the more traditional breakfasts up until this point.

soy bean milk & chinese donut
our first breakfast was fu hou doujang, a long standing breakfast stall in a second floor food court.  we heard that the lineup could get quite long so we were laughing when we got there and only saw 10 people in front of the stand.  and then we clued in and started making our way to the end.

it snaked past their counter, past their kitchen, into the stairwell, down onto the first floor, out the entrance and around the corner.  by my guess i would say about 70+ people deep.  we opted to wait it out and it actually went by very quickly.  by the time we got within view of the counter we could see how efficiently they were running.

there was one station for soyabean milk, one for the egg crepes and another that assembles the yu tiao ping (chinese donut wrapped in pastry).  they serve their soy milk hot and cold and also as sweet or salty.  i grew up eating the salty version but haven’t been able to eat it for years because of the dried shrimp they used.  i didn’t see them use any on this version so we got two bowls of sweet and a salty to try out.

the salty is made with vinegar to curdle the milk just slightly, chunks of chinese donut, green onion and a little bit of chili oil.  i still remember the flavour exactly and it ended up being my favourite dish of this breakfast but after one sip i saw two little eyes looking back at me from my bowl; the shellfish curse strikes again 🙁  as for the rest of the items:

yu-tiao – their chinese donut was fried very thin so it was completely crispy.  both of us like ours a little thicker with more dough at the center so we weren’t in love with this one

with the most famous place out of the way we went grimey for our second traditional breakfast outing.  this next chain (yong he dou jiang da wang aka: the king of soy milk) has a few stores scattered throughout taipei and the one by our second airbnb was 24 hours.  we stopped in around 2pm for an afternoon snack but ordered exactly what we would’ve ordered for breakfast 🙂

xiao long bao – huge, flavourful meat and decently thin wrappers though for 80nt ($3 cad) for 10, they weren’t the most delicate.  not that we were complaining, these still tasted awesome
rice roll – super dense roll (about 1.5″ in diameter) with pickled vegetables, chinese donut and sticky rice.  zero chance of falling apart with how well it was wrapped and packed together, even without the plastic wrap.
rice roll w/ egg – a thin egg crepe with green onion mixed in wrapped around a sticky rice roll with chinese donut.  so good!  also, flaming freaking hot.  this was kind of a nightmare to eat

chinese donut – crispy on the outside, doughy on the inside.  not as thick as you’d get in hong kong but more substance than 100% crunch
soy milk – so yummy.  i don’t know if they do anything special but i want to imagine this has a slightly nuttier flavour.  maybe it’s toasted or maybe my tastebuds are fried.  either way i’ve been there three times in a week and am going to try to squeeze one more fly-by before we’re outtie 5000.

second up were taiwanese breakfast sandwiches:

i don’t know what the english name for this place was but it had modern twist on a taiwanese classic.  their best known sandwich consists of pork floss, egg, peanut butter and topped with seaweed.  i have memories of my dad making these sandwiches when i was a kid except he used mayonaise instead of peanut butter and we usually had them on the round raisin bread bun from chinese bakeries.  we went to this store twice and were able to try something different the second time around.  for such a simple concept, the sandwiches were absolutely killer.

bread – thick, charcoal toasted slices with the crust cut off
pork floss – light and fluffy, not as salty as what we’re used to getting at home
egg – scrambled, cooked to thin layers and folded into a square to fit into each sandwich.  super duper awesome
peanut butter – say what?  i had my doubts but peanuts accent a lot of taiwanese food and the sweetness adds another layer of flavour
condensed milk – it doesn’t get much more chinese than this.  if it’s unhealthy, you know it’s going to taste good
dried seaweed – just a touch on top to add that saltiness.  my dad used to cook a scrambled egg on top of yakisoba ichiban and would top it off with the dried nori packets.  just as good 20 years later.

so overall, the sandwiches we ate were: meiji three spiced pork – a little spicy and sweet, the pork was sliced quite thin and would tear apart easily when taking bites.  similar to the coldcut platter at chinese dinners with a little sweeter taste

braised pork – this was good but by this point we had already had more than five run-ins with braised pork in taiwan and the bar had already been raised.  it was also a little hard to eat because of the single slice of pork

pork floss – our favourite out of the bunch.  the one with condensed milk and peanut butter tasted the best; the pork floss was so fluffy it was almost like eat

each sandwich was only 75nt, roughly $3 cad.  you could get away with eating one but our second time around we shared three between the two of us.  add on a cold charcoal tea to wash everything down and you’re good to go.  although this is a nicer place with a small seating area, it’s probably best to take it to go and eat it in the nearby park.

next were breakfast pancakes at loco food.

flakey wraps (like a roti canai) with your choice of stuffing.  this ranged from mushrooms to bacon.  the wraps themselves are very buttery and we chose to get ours stuffed with sausage, bacon, pulled pork (which was more like thinly sliced pork belly grilled on both sides) and mushrooms.

served with a side of ketchup and spicy garlic sauce, we also went to this place twice; bringing frank & karan the second trip.  each pancake is cut up into 6 slices and served in a skillet on top of a cutting board… nice presentation and a cool take on what you can get at the street stands for only 10-20nt (40-80 cents) more.

our usual travel plans consist of planning for a certain number of dinners but taiwan has actually made us plan all our breakfasts as well.  very few things aside from snow can get me out of bed early but if you’re not eating breakfast in taiwan, you’re missing out.