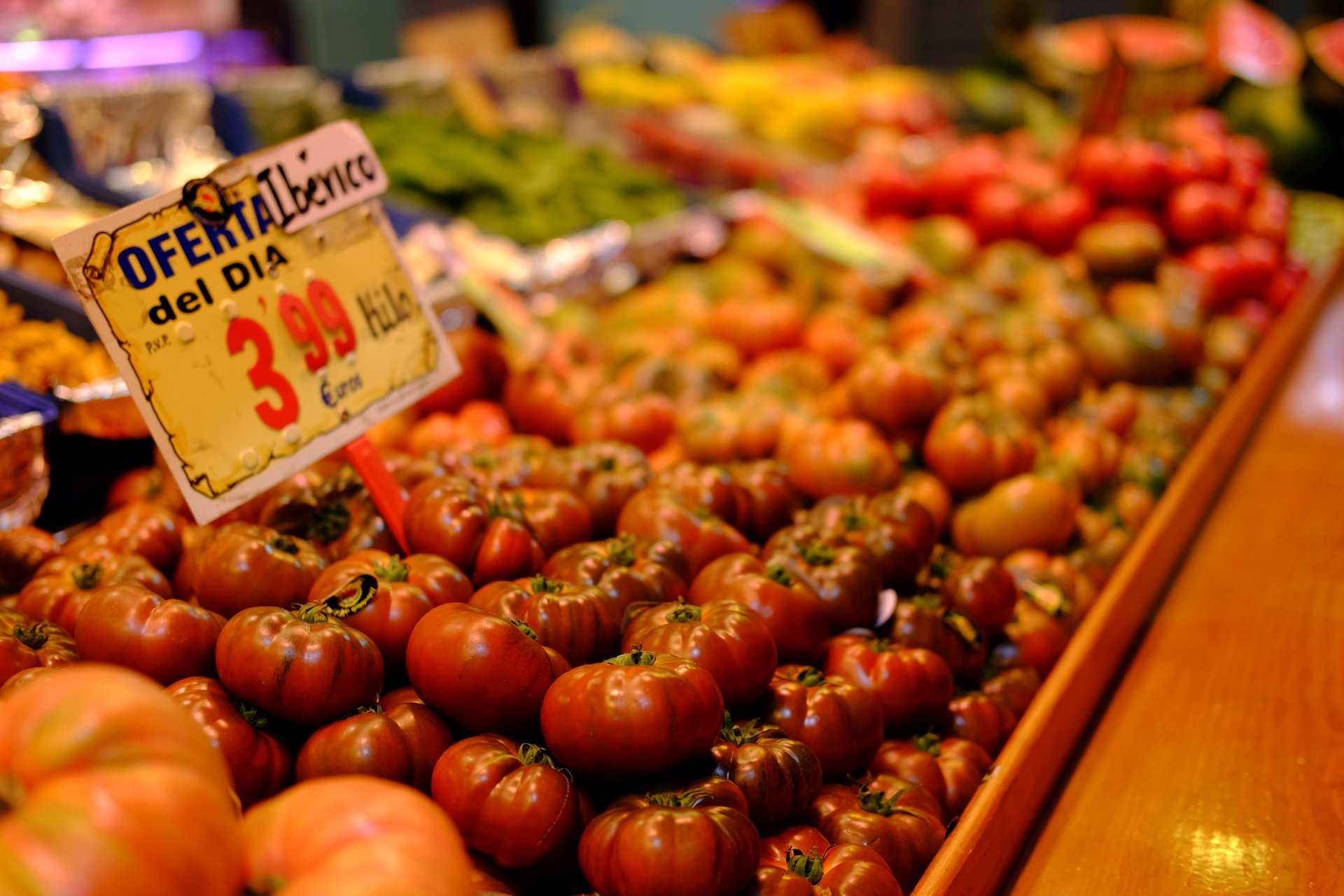 one of the biggest culture shocks coming from asia to europe has been the markets that spain’s cities have to offer.  from the fresh produce to the baked goods to the fresh seafood and even the candy.  toss in stalls selling fresh food from breakfast to evening cocktails and you have everything you need from dawn till dusk.

mercat de la boqueria – barcelona
where to begin?  la boqueria was our first stop in barcelona-proper and while unassuming from the entrance gate off of les rambles, it was sensory overload within a few steps inside.  we had one meal here, wish we had more and spent the most amount of time here out of all the markets.  full writeup on la boqueria is here

mercat santa caterina – barcelona
recommended by our airbnb host, santa caterina was not nearly as busy as la boqueria and it seemed to cater to a more local crowd.  a handful of restuarants made up this market and the majority of stalls sold fresh groceries.  we stopped here for lunch and had a simple cured meat and baguette lunch on the benches outside

mercado de san miguel – madrid
a recently renovated market very close to the middle of the city close to plaza mayor.  a very upbeat, lively market that sells some fresh seafood, offers up lots of drinks with lots of food options ranging from paella to burgers to tapas to gulas (fake baby eels)

mercado de san ildefonso – madrid
a newly contructed market in the trendy malasana hood, we made our way here to get a piece of gancho burger’s veal+truffle+foie gras burger.  this market consists of only prepared food and no groceries; stalls on the first and second floor, a bar on the third floor and open seating from top to bottom

mercado san anton – madrid
another trendy market in the chueca neighbourhood.  this was the first market in madrid we happened upon since it was down the street from us and there’s a supermarket on the bottom floor, more upscale groceries on the second floor, tapas restaurants on the third floor and a patio restaurant that occupies the upper floor.  from lunch until the evening, this place was busy and had a jam packed patio even with so-so weather.  the interior is very modern, the atmosphere lively and gets a lot of natural light which is a nice touch since most markets are usually well covered.  unfortunately i didn’t get any pictures of this one because i figured we’d keep going back since we were right next to it (went there 3x without snapping any pics smh)

mercado de la paz – madrid
a long standing market that i believe has been in operation nearly 130 years, mercado de la paz was our final stop in madrid to pickup some fresh supplies for our final meal in town.  we arrived during the siesta break, a little before 5pm, so many of the stalls were shut down but as we finished our shopping trip, the shutters were in the process of being pulled up by many stall owners.  the market is also partly outdoors and is a nice contrast to the newer buildings in the neighbourhood; salamanca being a more upscale area of the city.

mercado san agustin – granada
-maybe the weakest out of this bunch.  we happened upon this market by chance when we were looking for a casual lunch.  we strolled through the square complex and after passing numerous fresh seafood stalls and some tapas bars, we ended up leaving and lucking out at a homestyle (& VERY casual) restaurant across the street that served up one of our cheapest yet flavourful meals of spain.  vegetable lasagna, roasted chicken with rice, a spanish omelette and spaghetti bolognese for 8 euro.  eaten out of tinfoil containers.  money!  no pics of this one either since we just did a quick walk-through.

mercado de triana – sevilla
we walked through this one quickly since we arrived during siesta time (notice the pattern?).  half grocery and half restaurants, this market didn’t have the glitz of some of the madrid ones and it seemed like it was catering more to locals.  as we passed through two wings of the market, we saw groups of people chowing down on their late lunches, mostly italian being spoken

mercado victoria cordoba – cordoba
from sevilla we took a daytrip to cordoba with the intention of checking out some more old shit but ended up strolling around town and having a hell of a lunch at victoria cordoba.  as one of the newer style of markets, this one only had cooked food stalls and had a very large range of food to offer.  sushi and omelette rice was available to represent the japanese, indian food was also available, one stall specialized only in various takes on salmorejo (a cold, thick tomato soup great on hot days) as well as all types of spanish foods.  nads and i split a meal that consisted of a hamburger that you could customize 10 ways from sunday (type of bun, type of ground beef, doneness, toppings, sauces) and a ‘crazy’ baked potato aka: the gut bomb.  haha ended up with a cup full of snails and a stew and cyguy ate half the ocean to himself next to a mountain of paella.  a very nice market with seating both inside and outside on a covered but sunny patio.  a highlight of our daytrip.

so i guess we’ve spent a fair bit of time in the markets 🙂  go for the eye candy, soak up the atmosphere, take pictures of the eye candy and indulge in the food if you have the chance.  we might have overdid it but we still loved spain’s markets