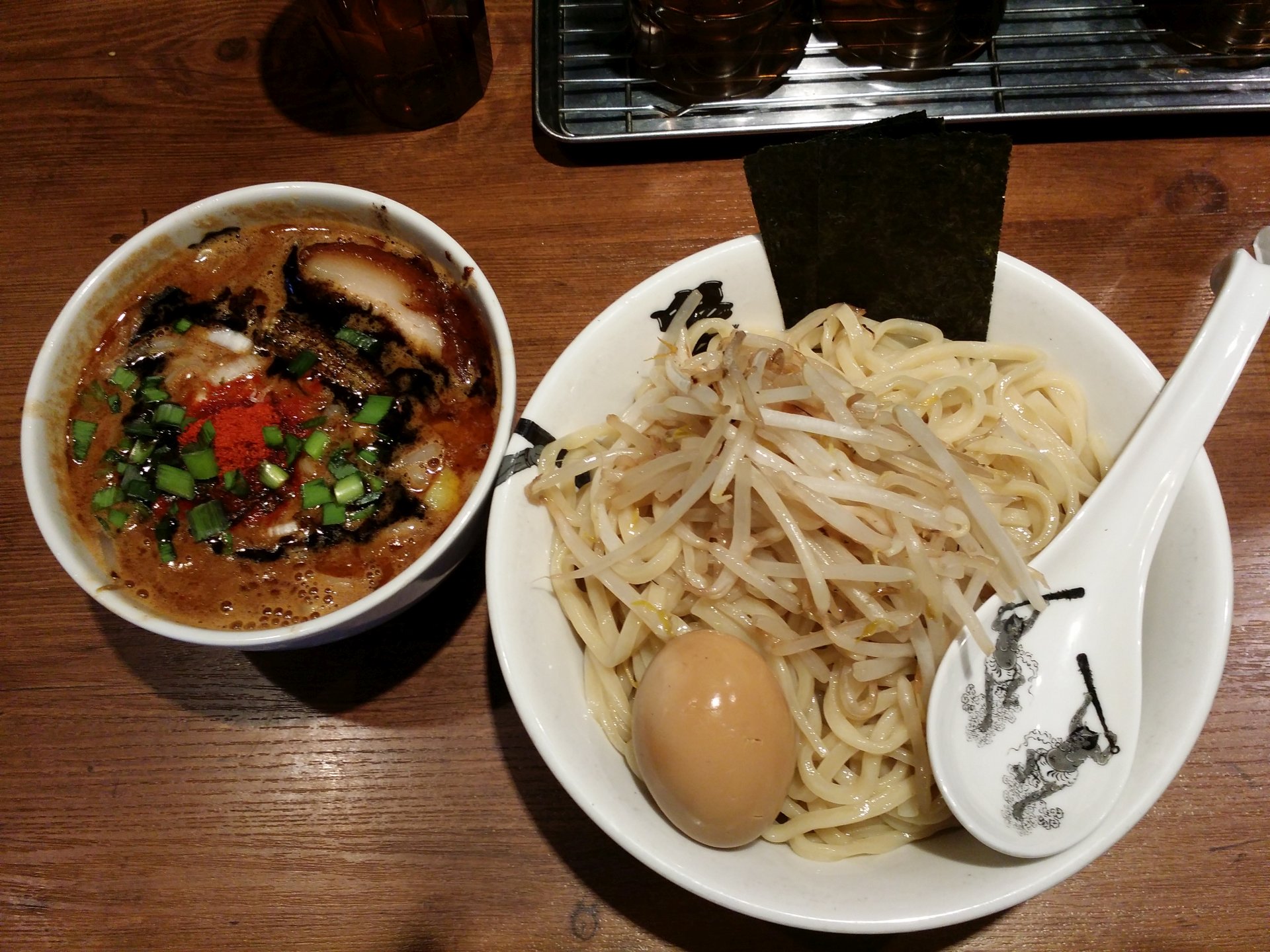 the last ramen store we tried was a break from the norm.  kikanbo’s calling card is spicy ramen and their bowls have been so popular that they opened up a second shop two doors down solely to specialize in each of the storefronts.  one shop only handles soup noodles and their original shop was converted to serving up only tsukemen (dipping noodle).

it was st patrick’s day and since we were staying near harajuku, we walked over to yoyogi park to see how the japanese people celebrated an irish holiday.  harajuku was, well, harajuku on a sunday.  dance groups were dressed up and putting on a show at the entrance of the park along with other street performers

kikanbo is located in kanda, just a few stops north of tokyo station.  when you exit the station you have to walk past a few alleys that are lined with noodle shops of their own.  be strong and stick it out.  don’t cave to the appetite.  by the time we arrived there was a lineup of about 10 people for the soup noodle shop.  we opted for tsukemen since we were pretty hungry so into the store we went… into the darkness.  completely different from every other ramen shop we’ve seen.

the walls are outfitted in black.  the counter is jagged.  water taps (not jugs) are installed every 2nd seat.  demon masks are scattered throughout the store.  and the background music is not music but instead beating drums.  it sounds like a war chant.

we both order the deluxe which comes with two portions of pork and are given the choice of small, medium or large noodles.  naturally i opt for the large and haha the medium.  if the noodles i received in the past were mountains, this one would be everest.  there’s also the choice of four different levels of spiciness for two types of spice.  first is the kara (japanese style) and then there’s the sichuan pepper.  this is what enticed us to check this place out, who doesn’t love sichuan with noodles?!

next to the vending machine is a stack of paper bibs which everybody in the restaurant was wearing.  as we saw people slurping down on their brown dipping broth, you could make out the little dots painting everyone’s bibs.  we thought it’d be best if we followed suit 🙂

our broths are delivered first and they’re much thicker than any ramen i’ve ever had before.  it was almost like a tan tan mein broth.  a rich brown colour with a whole lot of everything going on inside it.

by far the most different ramen that i’ve ever had.  each dip completely coats the noodles and the sauce doesn’t drip off like other types.  it’s almost like paint.

by the time i got to the bottom of my bowl (and 5 glasses of water) i was at the point of keeling over.  i didn’t even ask for soup-wari to drink my leftover broth but haha did so i asked for a sip of hers.  one tiny sip almost brought everything from my stomach up as i underestimated how dense these noodles were.  so tasty and if there’s a next time, i’d go heavier on the sichuan and lighter on the pork; i could barely even finish my second piece.

oh yeah, we also had some damage to report.

an awesome and extremely filling experience.  it’s no wonder that kikanbo has expanded so quickly.  i wouldn’t be surprised to see more storefronts added by the next time i’m back.