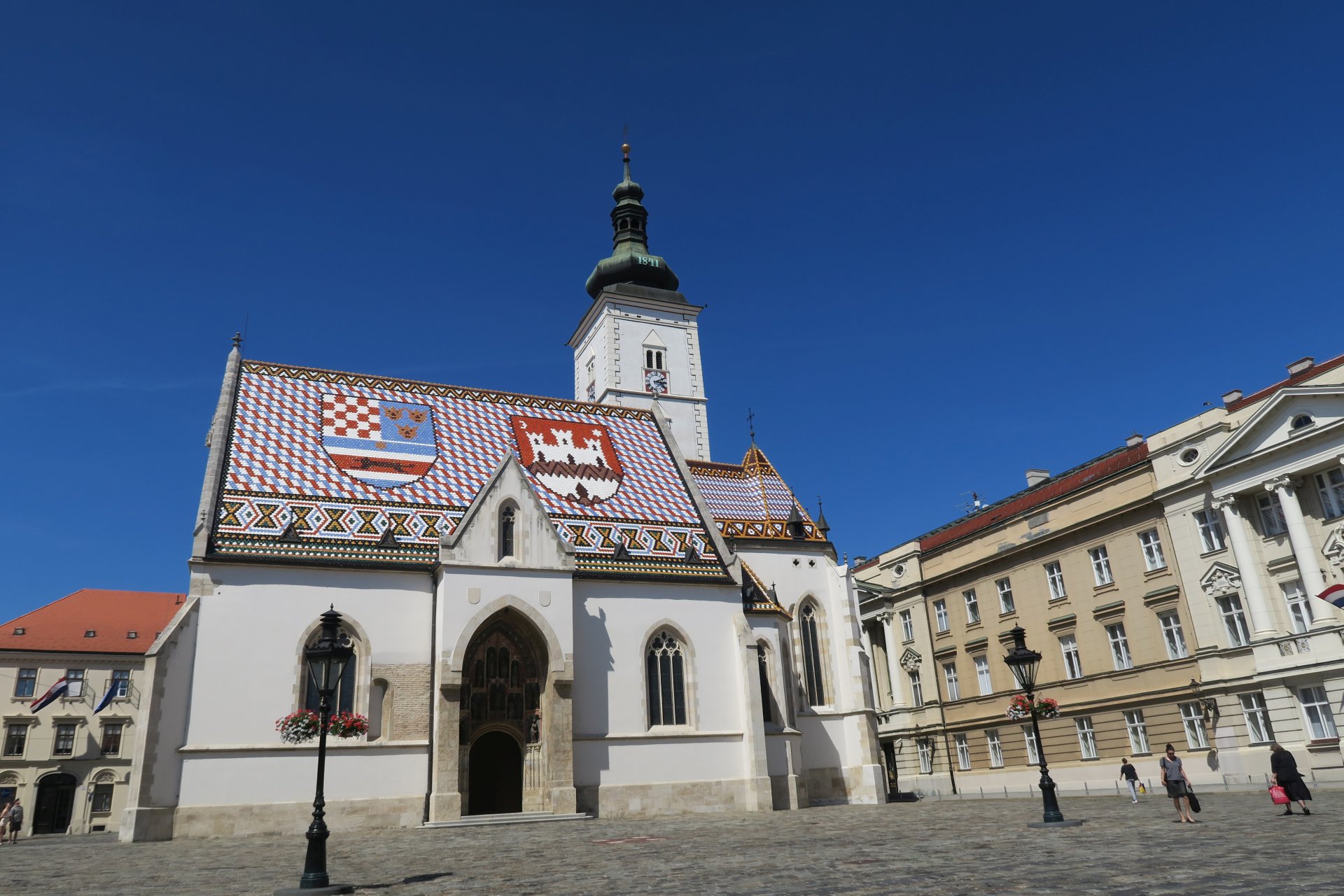 jojo:
what do i like?
-being the capital of croatia, big city = options.  have options for food other than grilled meat, pasta and pizza.  woohoo!
-very accessible city.  many tram lines, all above ground meaning no time spent walking through mazes of subway stations.  the trams also run very frequently
-the town feels empty, peaceful yet lively.  i mean, yes, there are buses of tour groups in certain areas but even at the cathedral, which i’d liken to la sagrada familia in barcelona (in looks and in presence), we saw one tour group that was pushed off to the side and we could take our time and marvel at the architecture without having to wade through a sea of selfie takers or pay 30euro to get a look
-you know that sticker shock we got when we left albania?  well now i’m asking myself why we didn’t come to zagreb sooner and for longer.  food is 30-50% cheaper here compared to dubrovnik with much more variety.  well, minus the truffles 🙁

-the largest craft brewery in zagreb is medvedgrad and they have a lineup of 7 beers.  all i needed was the one that i already tried in split, their ‘fakin ipa’.  finding local ipas that don’t break the bank for me has been a struggle in its own right this trip so i’ve been living the wine-oh life since albania.  at $4 cad (20 kuna) a pint including tip, it’s about 50% cheaper than canada.  nowhere that i’ve been this trip can claim that.

-another unique museum to add to my quiver at the museum of broken relationships.  what started in 2006 as a travelling show of symbolic momentos donated by those from failed relationships turned into a permanent exhibition in 2010.  all the items in the museum have been donated and come with a backstory of their significance.  from childhood loves to passionate romances to broken refugee families to suicide notes, i really enjoyed spending an hour walking through this museum.  30kuna ($6 cad) is all admission costs.

what do i dislike?
-a big city, concrete sprawl and perhaps not the prettiest of cities to look at however with only three nights here, we get to indulge in the good.  we unfortunately won’t be able to make it out to many neighbourhoods during our limited stay

what do i like/dislike about the new accomodations?
-i dislike nothing.  nothing at all.  in fact, i want to move in immediately.  this is THE perfect place and the type of apartment that haha and i would love to be living in with the modification of a larger kitchen.  the bathroom is huge, shower works perfectly, bedrooms are humongous, very nicely decorated, meticulously clean and is at an intersection that brings five tram lines to our doorstep.  it’s perfect in every sense.  oh i suppose price is a factor.  $80 cad a night divided by three people.  so far, this is the best place we’ve stayed at this trip.  none of us want to leave.  ever.

biggest adjustments from the previous stop?
no more beach time 🙁  porec was a rough stint for me because of getting sick so i actually don’t have much adjusting to do.  am also looking forward to not having to be behind the wheel of a car for 3+ hours a day and to just kick back, have a few drinks and, well, vacation a bit.  i’ve been lacking motivation to do any shooting (photos) lately and i’m starting to get that itch back now that i see the energy in the streets.  city life feeds my stalker tendencies i suppose.

what was our first meal?
-bistro fotic, a recommendation from my tennis boyfriend, frank.  started off with a charcuterie platter consisting of smoked cheese, pickles, peppers, olives and a mix of cured boar and deer meats.  100 kuna ($20 cad)

smoked cheese dumplings (not gnocchi, these were actually shaped like mini gyoza, stuffed with meat, mixed with oodles of cubed smoked cheese and topped with a cream sauce.  i hated myself with every bite but i couldn’t stop until my stomach made me)

stuffed eggplant for haha.  one massive eggplant stuffed with ground meat.  all of us left this meal with bellies the size of croatia.  total damage was roughly $50 cad total with drinks.

overall impressions?
it’s funny how i go back and forth between big city and beach towns in my head nowadays.  just as soon as i fall in love with one, the other one drags me back.  i couldn’t be happier to be back in a town with well prepared, locally sourced food especially as cheap as it is here (ie: copenhagen quality food at a 50-75% discount).  like the tourists we are, we’ve (i’ve) missed western & asian fare but since i’m not going to play russian roulette with chinese restaurants, we’ll be getting our ‘modern’ food fix before we leave the city.  the city also has a very nice balance of old character and modern flair; gobs of coffee shops with no starbucks in sights, fancy & cozy patios to choose from everywhere, very clean roads & sidewalks and at an amazing pricepoint compared to the other metropolitan cities i’ve been to.  after just 24 hours, i really like zagreb and will definitely be adding it to my list of cities to revisit.  i suppose any trip back to croatia couldn’t have been complete without a trip to the capital anyhow so i can start working on that itinerary asap 🙂

I love that there are tons of bookstores in the city. I’ve been powering through books like crazy since Greece so it’s nice to find bookstores with English titles along the way. I really should invest in an eReader to make my luggage less heavy.

And what better place to read books than a cute coffeeshop? Zegreb has cute coffeeshops galore. So awesome to spend an afternoon just sipping a latte and get lost in a good book.

Having to deal with more people in the streets again. And having to make reservation at a restaurant because it’s so busy, haven’t had to do that for a while now.

The airbnb is probably the nicest place we have stayed in. Loved the decor, wish we could have this apartment exactly as is as our own place down to the filmy window coverings to the cute entryway.

It’s cooler in Zagreb, I actually had to wear a sweater in the evenings. Kinda weird having to do that after a month of hot weather.

Since Jojo already talked about our meal at Bistro Fotic, I’m going to talk about my breakfast at Kava Tava. It’s been a while since I’ve had pancakes and these ones hit the spot. I did have a hard time finishing it as the pancakes were pretty dense and covered in chocolate and vanilla sauce.

I really like Zagreb and would definitely come back if we visit Croatia again. It’s not a big city, has a good tram system and has lots of good restaurants. It has enough alleyways to discover cute coffeeshops and bookstores but not so big that walking around becomes too tiring. Just the perfect sized capital city.