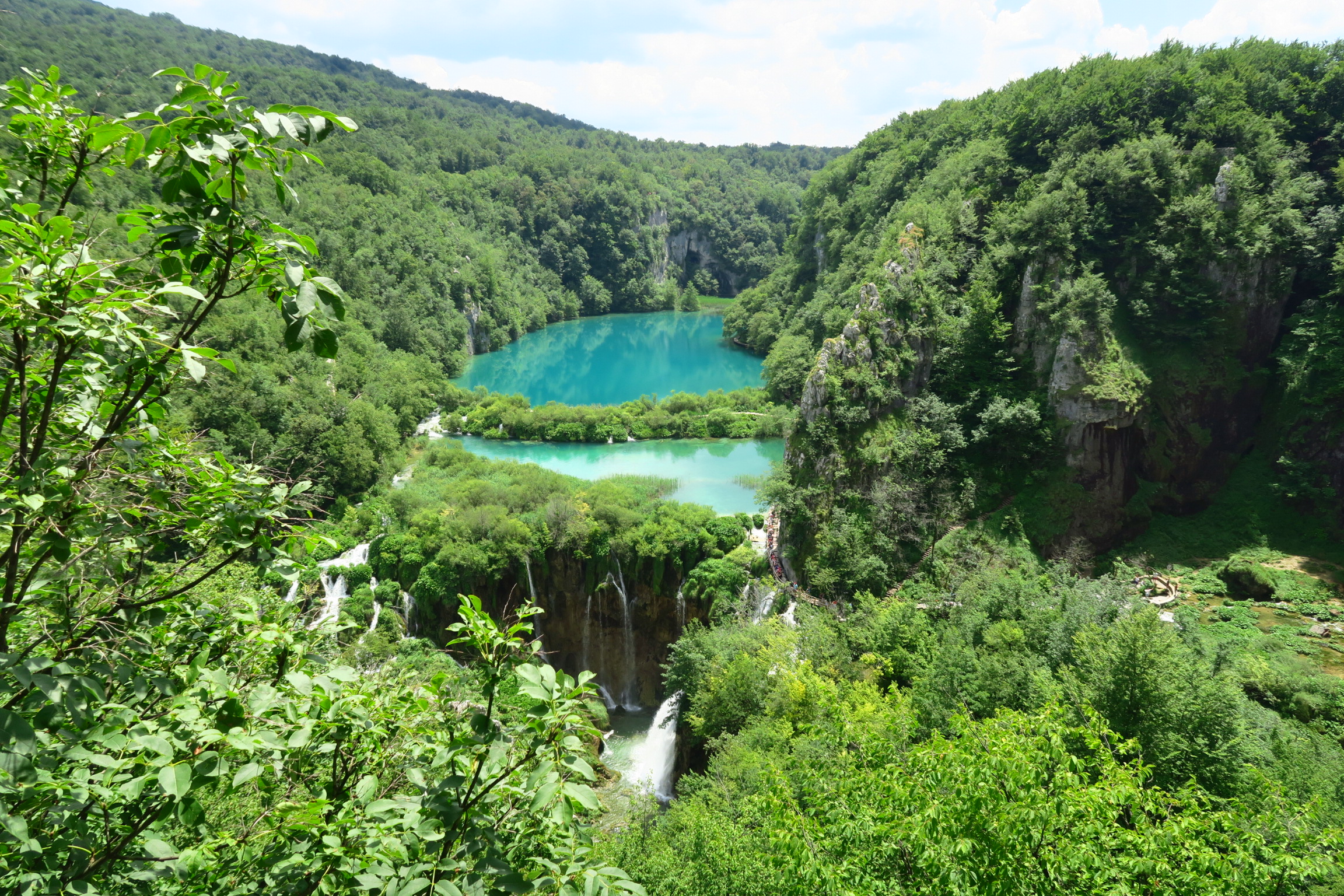 our third stop in croatia was plitvice national parks, the biggest and oldest of the country.  it is also a unesco heritage site, one of less than 10 in the country and is by far the most popular of the list.  going by our history when visiting any unesco site, we made arrangements to stay in an airbnb within the park’s region in order to beat the crowds.  tour buses usually being showing up at 9-10am and we aimed to get to the entrance gates by 7am.

well that was the plan at least.  we woke up bright and early, left our airbnb after barely a 12 hour stay and drove to the entrance.   in my haste i was driving so fast that i overshot the entrance by 10 minutes.  include the back tracking at a slower speed, looking for parking, purchasing tickets, getting breakfast and we didn’t get going until nearly 8am which worked out fine because the shuttle bus to get to the upper lakes did not start running until then.

there are multiple walking paths that you can take and we chose one which was estimated to take 4-6 hours.  this path takes you along all of the scenic viewpoints of the park though it did make the day a little longer than we had expected.

after getting off the shuttle we began our walk through the upper lakes.  we were the second group to start our walk and it was great to stay ahead of the pack for a bit.

it was so quiet, peaceful and the sun was still climbing its way upwards and the lighting was very soft.  we stopped to take a few pictures on the way and we ended up playing leapfrog with a large group of visitors.

as the trail went longer, the waterfalls in the distance got closer, bigger and grew in numbers.  there are points where the only sound you can hear are footsteps and then there are others where you can only hear running water.  it was very different from our trip to krka falls just a few days prior as these falls are considerably smaller but scattered over a much larger area. going at a reasonable pace, the first portion took us just over an hour at which point we boarded a boat to shuttle us back to the lower lake area.

once we disembarked the ferry the crowds were out in full force.  as the day went along, we appreciated the first section more and more as the walkways got more crowded.

we stopped for a quick lunch at this point and then resumed course for the large falls.  this bottom section featured a number of azure/turquoise lakes and the colours were changing by the minute depending on the way the sun was hitting it.

as per usual, we had to wade through a whole mess of people with their selfie sticks in full tow.  j-lo nearly got stabbed by one and he almost tripped over these geniuses who decided to lie down in the middle of a stampede of trail walkers

oddly enough, as of a few weeks ago, plitvice has a few newsworthy points surrrounding itself.  to start, park staff are urging people to use better judgement when taking pictures, aka stop with the stupid selfies.  am i exagerrating this?

“dear tourists, we respect you. it’s time for you to start respecting yourself. so, stop making stupid and dangerous selfies. thank you”

this comes on the heels of a 20-something year old canadian man (go canada!) who fell from a relatively large cliff while taking a picture and avoided death thanks to branches breaking his fall.  an older tourist from the czech republic had also fallen from an out of bounds cliff area earlier this year as she was taking a selfie however god wasn’t watching over her at the time.  while an amusing warning i think they should have taken a different road and left the people to figure things out on their own.  evolution has a way of sorting these issues out.

the other newsworthy tidbit is that plitvice is now also in danger of losing their unesco heritage site designation due to the crowding and development within the park.  up to 15,000 people visit the park daily during peak season however there are no designated times on entry tickets.  as we found out when we visited the alhambra in granada, visitors to the nasrid palace were limited to 6,600 daily and had specific entry times that they were valid for in order to preserve the monument.  plitvice park would be well served to allow for a similar arrangement although things get tricky because of the various trail lengths that one can hike on.

anyhow, not to get too off topic and taint the day we had up there but aside from the retarded crowds, the sights were still top notch.  after walking through the gigantic lower lake, the crowds started to get really thick as we approached the mother of all waterfalls… the ingeniously named ‘big waterfall’ of plitvice park.

now i’ve seen some pretty big cliffs during snow season but veliki slap (the big waterfall) measures in at 78m and is no slouch.  it falls into a secluded area and from far away you can see the mist covering the whole area.  the sound of the water drowns out the voices of all the tourists.  haha had heard of another vantage point that we could get to so we made our way up a slightly hidden set of stairs that snaked back and forth until we got to the same height as the top of the falls.  from there it was a short walk down a dirt path, asphalt road and another dirt path to come out right next to the the top of veliki slap.

when we arrived, there were only four koreans up top as compared to the hundreds that were circulating through the bottom viewpoint.  we tossed down our bags and hung out up top for a good 30 minutes as we had another 3-4 hours on the road before we got to our next bed in the town of porec.  during the time we were there we only ran into two other solo travelers.  awesome find by haha!

all in all, an amazing day that gave me more than my yearly dose of waterfalls and a boatload of memories that i can link with tlc.  i’d also want to come back in the wintertime as some of the lakes and falls freeze over completely.  admission fees are also cheaper during the offseason at 55 kuna ($11 cad) per person as compared to the peak season rate of 180 kuna.