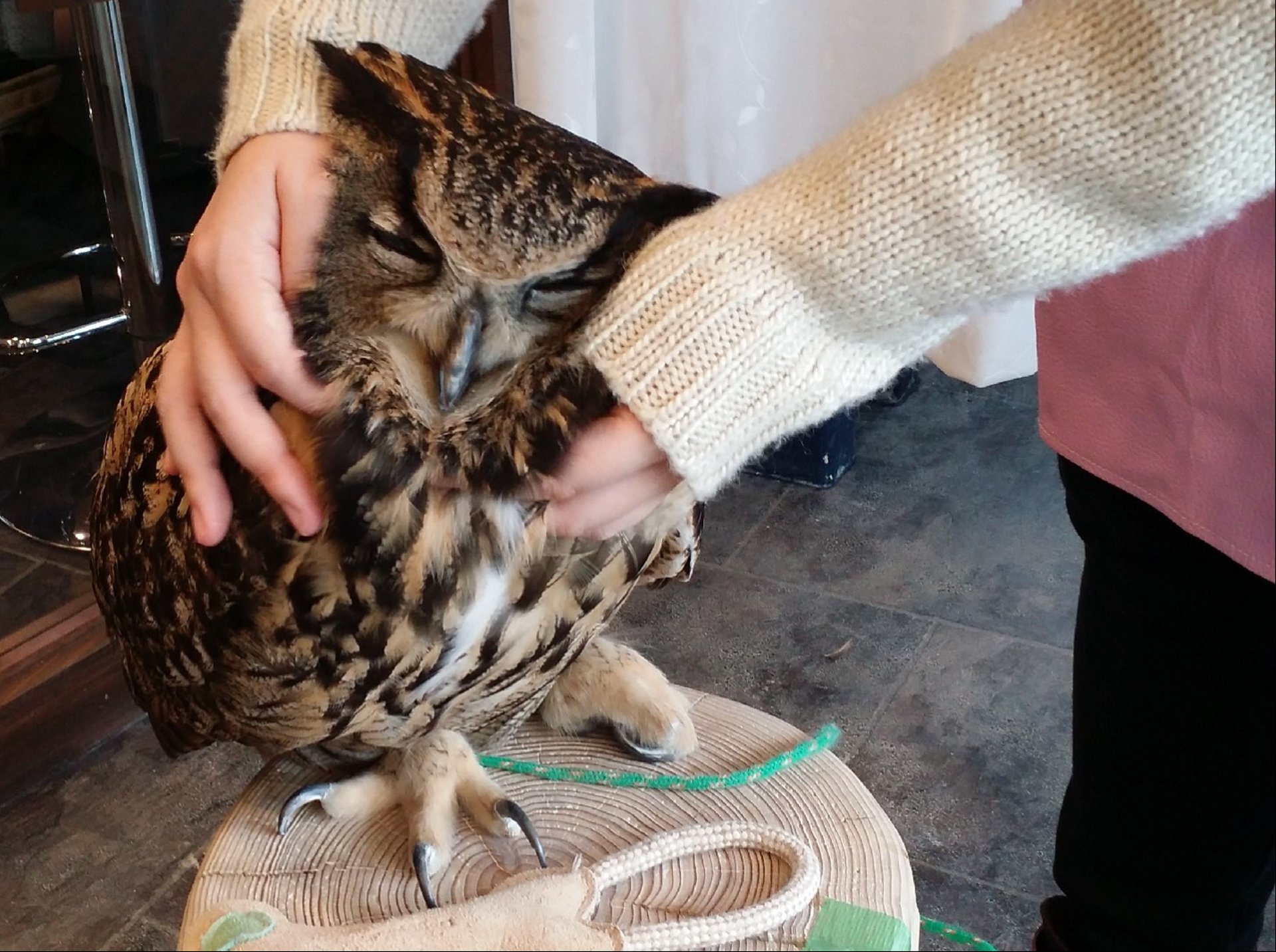 we went to our first cat cafe back in sapporo so why not owls right?  i don’t know what possessed us to climb the stairs to this cafe but once we got there, curiousity got the better of us and we committed to a half hour visit.  we paid our 2000 yen and walked into the small 10 seat cafe/bar.  we were handed a one page listing of rules on how to conduct ourselves in the ‘owl room’ when it was our turn.  standard stuff such as not using flash when taking pictures, no sudden movements, drunk people will not be permitted to handle owls.  oh, and to be forewarned that owls may take random poops (which did happen as we were there) so you essentially have to be ok with being crapped on.

i’ve never seen an owl any closer than maybe 100 meters in a zoo.  all i remembered about them was that they never seemed to be that active in a zoo environment.  for all i know, those cages could have been stocked with wooden owls.  fooling people for years and no-one’s the wiser.  well, these ones were a bit more interactive or at least some of them were.  one owl in particular slept the whole time we were inside, holing him/herself up in the corner and ignoring everyone.  well fine, no pictures for you.  the rest of them were pretty lively, for owls.

the seven owls were all 1 – 1.5 years old and ranged in size from half a foot to one and a half feet tall.  the little ones were very receptive if you reached out to them.  most of them seemed to like being scratched on the chest.  i had no idea that their feathers were so soft and so fine.

if you want a little extra out of your stay, you can pay an additional 500 yen to be able to feed them what i think was some sort of cod mixture.

of note, everything in the store was owl themed and was for sale.

i was originally hesitant to support businesses such as this cafe with the thought that the owls are living in captivity and not in their natural habitat.  seeing the chains on their legs was a little sad but after spending some time in the room it felt like they were at ease with their surrounding.  one owl was brought outside to get cleaned and it seemed very cooperative with the whole process without much coaxing from the handler.  i don’t know if this is going to lead to me giving up my career as an awesome computer guy to become an owl whisperer but it was an interesting experience.  i figure there’ll be weirder cafes to come as we make our way through the rest of asia so i’m slowly working up the courage to deal with rabid animals