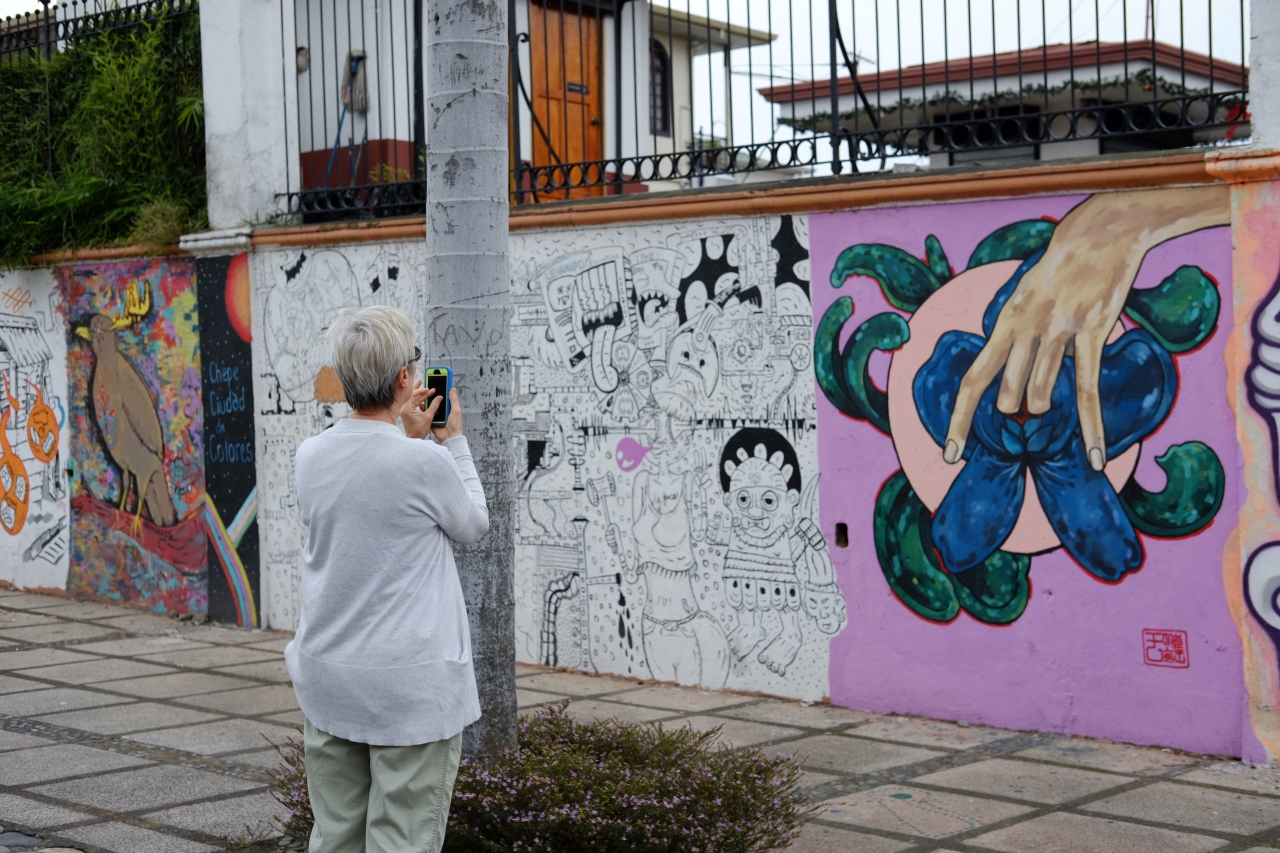 what do i like?
-lots of options for food – from french to italian to argentinian to lebanese to pub fare, san jose has a lot of variety to offer for culinary options.  the high end is quite high (out of our price range by a longshot) but on average, the majority are very affordable by north american standards.  with tax and 10% service charge, we are actually paying the same price as we would back home… which leads me to…
-beeeeeeeeer – the craft beer movement here is huge.  they’ve embraced it with open arms and have a plethora of companies that brew within the city limits as well as others spread out around the country.  this trip has rekindled my love for rum (mmmm, flor de cana) but san jose made me feel like i was already home and back on a beer diet.  i’ve now got a three day head start on my winter spare tire…
-gentrified neighbourhoods – barrio escalante is home to an endless number of breweries, restaurants and street art.  walking through that neighbourhood feels no different than any major city we’ve been to this year, albeit with a different language.  the interiors of these restaurants range from industrial to modern and attract a range of ages

-street art – lots of murals in barrios amon and escalante and they have very different styles.  the majority of the artwork seems to be in the form of murals rather than tagging and it brings some life to the streets

-tons of locals – an overwhelming number of locals walking the street with families and kids in tow.  buskers are out working the streets and the ones we’ve come across are not harrassive in the least

-uber – this is my first time using uber and i’m loving it.  it’s efficient, cost-effective at about half the price of taxis and it takes any sketchiness out of trying to find a ride home.  the drivers we’ve spoke with love providing the service as they get paid more than if they were driving local taxis and as a customer, it makes getting around the city a breeze.  vancouver needs to get its head out of its ass and give the people what they want.

what do i dislike?
-traffic – holy smokes, traffic is no joke here.  the population of san jose proper is roughly 300,000 and with at least two lanes in each direction on main thoroughfares (sometimes three), traffic is still gridlocked throughout the day.  our bus was roughly two hours late thanks to insane traffic en route to the capital and once within town, our uber rides had our drivers fighting to get through gridlock traffic in both directions
-slums – like any city, there’s a darkside.  san jose is no exception and passing through the bus terminal neighbourhood on a weekend gives you a front row seat to some seedy things.  this is usually the first thing that is mentioned about san jose in general and i feel that it unfairly labels the city especially by many people who haven’t taken the time to travel through said neighbourhoods.  virtually every major city in the world has crime, poverty and prostitution and central america isn’t immune to that

what do i like/dislike about the new accomodations?
-we couldn’t be happier at the park inn for $110 cad/night including buffet breakfasts.  a king sized bed, modern decor and a showerhead the size of a satellite dish with scalding hot water.  AND it doesn’t leak all over the bathroom.  how’s that for ending our trip on a good note?!

biggest adjustments from the previous stop?
-rewearing old/lightly worn clothes – no more traveling like a vagabond, we can wear clean clothes with reckless abandon now with only two more days to go
-from beach life to city life, doing more than simply eating a meal when we leave our hotel makes the day feel really productive.  i’ve spent the last two weeks getting as relaxed as i will ever be but i was starting to crave some movement in our lives.  getting into a bustling city is the great way to end this leg in costa rica

what was our first meal?
-beer!  oh, and burgers.  our plans to arrive in town at noon for lunch were thwarted by insane traffic and a delayed bus ride.  we arrived at 3pm and couldn’t wait until dinner so a light snack turned into our dinner at 5pm and by 7pm both of us had gotten accidentally drunk after just two craft beer bars.  such rookies.

overall impressions?
san jose is so much more than a quick stop-off before heading home or to other regions of costa rica.  i had spoken to an well-traveled and extremely friendly portlandian lady who has had a vacation home in playa hermosa (a beachtown in the north-western area of costa rica) for over fifteen years and as soon as i mentioned san jose, her face curled with disgust.  this has been the reaction of many blogs and travel sites that we’ve browsed upon as well and i’m going against the grain here and saying that while that may have been the san jose of old, it certainly isn’t true in this day and age.  spending 3+ nights here will give you a taste of the biggest city of the country, some great meals, access to a multitude of museums and also some great bars if that’s what you’re into.  it might be my second favourite ‘big’ city that we’ve visited on this nine week leg in central america, behind leon in nicaragua.  sure, there are times where you want to be sure of your surroundings however walking around town hasn’t felt sketchy and it feels like everywhere we’ve been, we’ve gotten a chance to see real tico life, however hard it may be in some instances.  to those flying into san jose to start their trip, i suggest to give the city a chance to win you over.  ticos are some of the friendliest people we’ve met this year so spend a few less days with the tourists in almost every other destination in the country and a few more days with the locals in their capital.