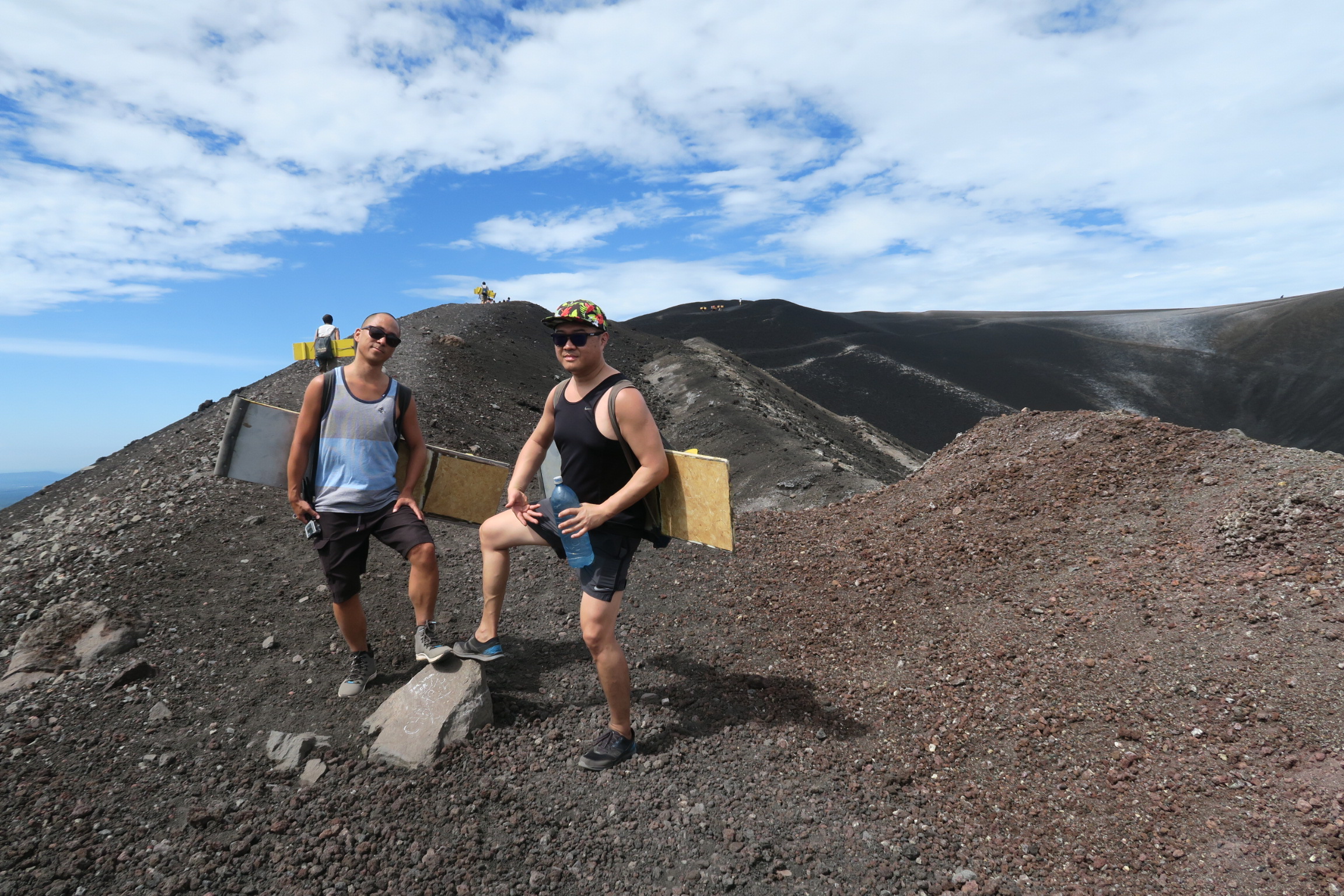 q. favourite meal
a. cuban food at el bodegon. a ex-pat owned restaurant with an alley-shaped courtyard. their menu is very simple; pick one of six types of starch and pair it with one of four meats. i ended up with the lechon (pork) topped yucca which went down scarily easily.  pair me with a dish that can be eaten with a spoon and i’ll be looking at everyone else eating for a good 10 minutes.  top it off with with a frozen mojito and life is golden. pictures weren’t really an option as we were basically dining in the dark but we all left with a full belly and reddish smiles. we’ve also been drinking our share of the local rum, flor de cana (aka the best rum i’ve ever drank, aka liquid gold, aka nicaragua’s #1 export-in-the-making). at barely $5 cad a bottle, we have lots of leftover cash for grilled meats and the like.

q. most memorable moment / best highlight
a. volcano boarding at cerro negro. the first time i had heard that volcano boarding was doable was when i put nicaragua on my travel radar. about an hour out of leon is cerro negro (black hill), a low lying, active volcano. an hour long hike up the hill brings you to the summit and from there you make your way down via a sled/toboggan. it’s a lot less like ‘boarding’ as i was hoping for but after getting in place on the sled, it’s easy to understand why. the volcanic rock has too much friction and you’re completely helpless in terms of navigating or even controlling the speed of the sled so standing up would be somewhere between disastrous and lethal. our two-minute safety walkthrough taught us to essentially ‘don’t fight’ and ‘don’t try to steer the board’. as simple as that was, it worked. a one hour hike up rewarded us with a 1 minute ride downhill. shorter if you didn’t fall off the board. with every 10 feet that you pass, your speed increases and you can feel volcanic pebbles hit your face as you make your way downhill. you can hear and feel the wind pressing against your face and even though you can’t see much through your scratched safety goggles, you can make out that the small dots at the bottom of the hill (otherwise known as your friends) are slowly increasing in size. eventually, you get to a point where you realize that things could go horrible wrong at any instant and that’s when it dawns on you that nicaraguan safety standards are probably quite different to those of north america’s. and then, before you know it, it’s all over and done with. you’re grinning from ear to ear, high fiving each other at the bottom and staring back up at a dusty, grey path that just a minute ago, seemed so intimidating. was it hokey and touristy? yes. was it fun? surprisingly, yes. how fun was it? well, vince and i hiked the hill again to get a second run in 🙂

q. greatest challenge
a. dealing with incompatible travel buddies. we’ve been fortunate enough to get along very well with the majority of people we’ve traveled with in the past but this week has proven to be quite the test of patience. one of the things that i’ve learned this year is that there are many styles of travelers and while that is partially the case here, we are simply not compatible acquaintances to begin with which makes things even more trying.  haha and i didn’t even get the brunt of it but being so close to the awkwardness doesn’t make it a fun environment for anybody.   for future reference, i will definitely discuss travel plans with anybody that i’m going to be traveling with (ie: what do you hope to do this trip?  what is your travel style?  what kind of places do you want to stay in?  are you an asshole?)  so to take a quote from my lifelong idol, comic-book-guy, ‘never. again.’.

getting sick also hasn’t made things too enjoyable on little corn island. after a month of inland travel, we’ve finally made it to a carribean island and i’ve somehow managed to catch a cold in 30 degree heat. argh :/

q. what i miss most from home
a. fried rice & runny yolks. i’m starting to get a little tired of gallo pinto (rice & beans) and the white rice here is so bloody boring. it is also an ongoing joke in nicaragua that all egg yolks must be eaten in a crumbly yellow state. breakfast has never before been so depressing.

q. next stop
a. a one night stopover in the capital of managua before we head to costa rica. it’s our last week in nicaragua :*(

q. weirdest observation about current culture
a. everybody is dressed up down to the little children. in parq central on saturday night, families are out in full force and all the little girls are in dresses and fashionable skirts. the standard outfit for males are khakis and collared shirts whereas women usually wear blouses and skirts. aside from the extremely poor, locals generally do not wear shorts. as tourists, i feel severely underdressed however i don’t know if i would make the concession of wearing long pants and a dress shirt for fear of my clothes turning into sponges within a matter of minutes.

q. one tip i would give myself if i were to come back
a. spend more time in the north and on the beaches. nicaragua has so much to offer to a variety of travelers; beach vacations, surfing, inland excursions, yoga retreats, overnight hikes, volcano tours, rainforests and national parks (with plenty more to choose from!). we’ve barely scratched the surface howeve we’ve seen enough to know that it would warrant a return trip. i’ve run into a number of people who have revisited nicaragua numerous times because they’ve fallen in love with one aspect of the country and i can see myself going down that same path.

q. friends i’ve hung out with/visitors
a. frank, vince and his friend alex. we’ve also bumped into a couple again while volcano boarding that we had met at earth lodge in guatemala. they’re a little more than halfway into their 3 month vacation before they head back to the uk and onwards to their new home in australia.

q. one random/weird/cool thing i learned about the country i’m staying in
a. nicaragua is so varied. each town we’ve stayed in has felt completely different from the previous one and both big and little corn islands are even more different because of the carribean influence.

q. one new experience/memory that will stick with me
a. we visited a turtle farm near the town of las penitas just outside of leon on the pacific coast. we weren’t quite sure what kind of tour we signed up for because we took the advice of our hotel owner. following his recommendations, we would save a few bucks and be able to watch the turtles get released at night. what ensued was a 2 hour tour of the mangroves to view wild birds in a semi private boat, a visit to the turtle farm during the weening hours of the afternoon and also being able to see a pack of one day old turtles get released into the ocean! i saw my first wild turtle earlier this year in the philippines and he/she was pretty close to a meter long. these newborns were barely two inches long and super cute with their soft shells and little flippers!

q. portion of luggage that’s been the most & least useful
a. everytime i pack i always manage to sneak in a collared shirt. i just never learn.