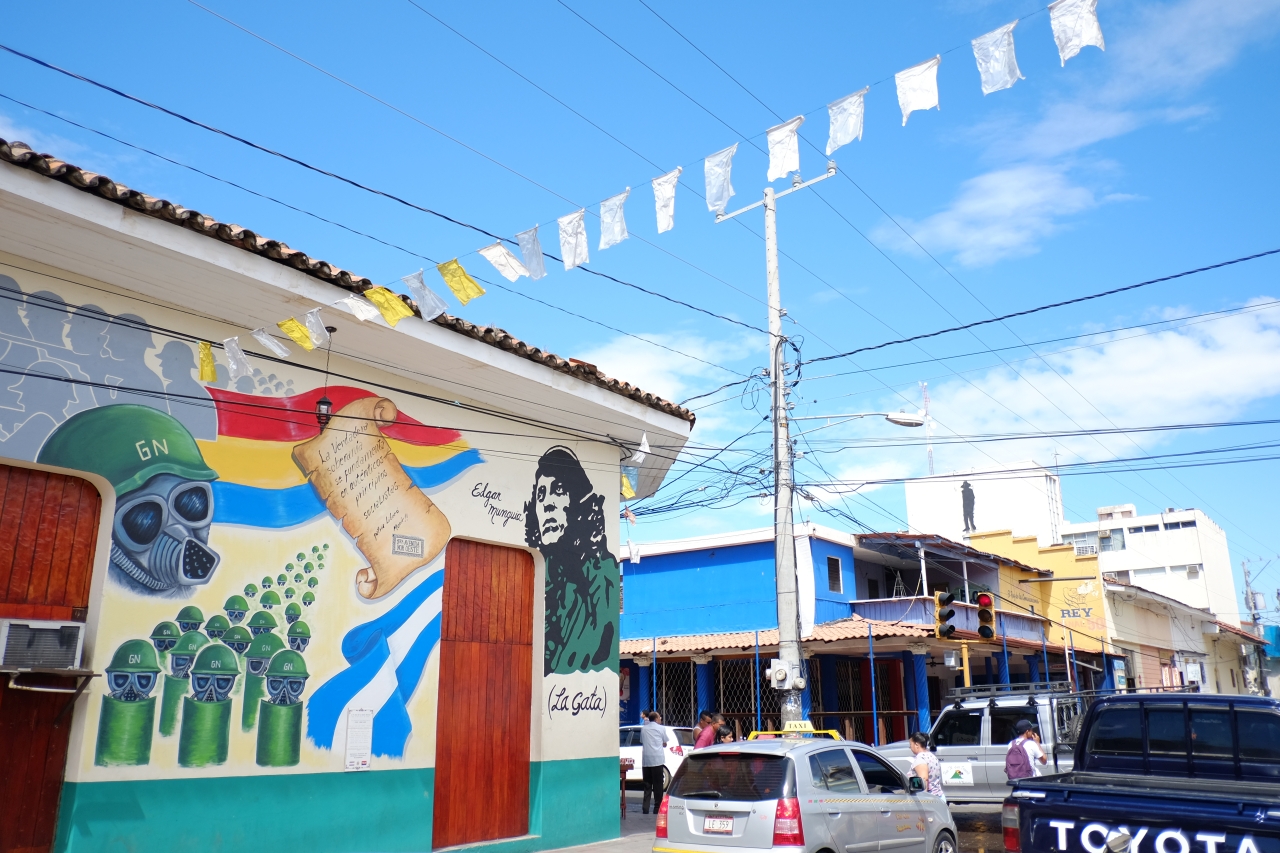 what do i like?
-the town feels alive – lots of university aged students and people on the streets at all hours of the day. this is what i expected out of granada but instead it was the complete opposite. having arrived close to the weekend, the city was bustling.

-roaming around town with shooting buddies – i haven’t shot with my photo sensei frank since the philippines in april of this year. when we’re not eating we’re taking pictures and the days go by surprisingly fast when you stick two people who take an annoyingly amount of pictures together.

-this is the friendly nicaragua that we’ve heard about – we’ve had a warm reception by locals everywhere we’ve gone since we left granada and leon might be the warmest of all. i’ve been making the attempt to speak spanish with the locals and it’s been at least mildly enjoyable for one of the parties. it’s going to take a long time before i’m remotely fluent so i might as well start now. i can forsee a lot more traveling to south american and spain in the future.
-minimal horse poo in town – no horse driven carriages for city tours means a lot fewer mountains of poo to navigate
-reasonable prices for budget travelers – a meal in leon can range from $2-15 cad and although the drinks aren’t quite as cheap as in granada, the food selection is much more varied and the quality is better as well. even the tourist trappy steakhouse we hit was better value than in granada. this is the first stop in nicaragua where the food has been relatively inspiring thanks to leon being a ‘working’ city as opposed to being tourist-driven.

what do i dislike?
-getting hot, hot, hot – we heard that the heat in leon could be blistering and the reports were bang on. when the sun hits the streets, you’ll rarely find a local walking on the sunny aside; the only people silly enough to do it are gringos

what do i like/dislike about the new accomodations?
-we hit the jackpot. flor de sarta was an amazing hotel. easily the cleanest of all our stays thus far in central america, two beautiful courtyards to hang out in, free running chickens and baby chickens, a compact, clean and perfectly cool pool to take refuge from the heat in, king size beds, top notch service from all the staff and the coolest beagle to hang out with named bruno.

i would wholeheartedly recommend flor de sarta to anybody traveling to leon. the one caveat is that they would strongly prefer that you do not bring in your own alcohol onto the premises but they remedy that by charging supermarket prices for their booze. i can’t say that i’ve ever run into any hotel that’s been that reasonable.

biggest adjustments from the previous stop?
-we’re back in civilization again – our previous three stops in ometepe, playa maderas and san simian had left us isolated from the crowds. once we got within the city limits of leon we could see and feel the energy as we passed through the markets and saw the collectivo vans picking up and dropping off people
-shooting street rather than landscape is a nice departure and gives the city a different feel when you’re out and looking for the litle details
-daytrips from leon are plentiful – we plan on going volcano boarding and still have another day to either hit the beaches, visit the old city of leon or visit another volcano

what was our first meal?
-a western style nica cafe called cafe rosita. high ceilings in a two level colonial building with a breeze which was just as important as getting some food into our empty stomachs. i had the nica style grilled pork served with rice and fries (needed a temporary departure from plantains). this went down in about 5 minutes and i had to add on a ham, egg, cheese and mayo sandwich. the guilt of eating westernized crap was overshadowed by my indigestion.

overall impressions?
-when reading up on nicaragua, the majority of people say that they will love granada but leave their heart in leon. i’ve joined the masses. leon is a colourful, working city. the expat population is large enough to make things easy for travelers but small enough for an authentic nicaraguan experience. so far, leon and playa maderas are the two areas in nicaragua that i could spend more time in.