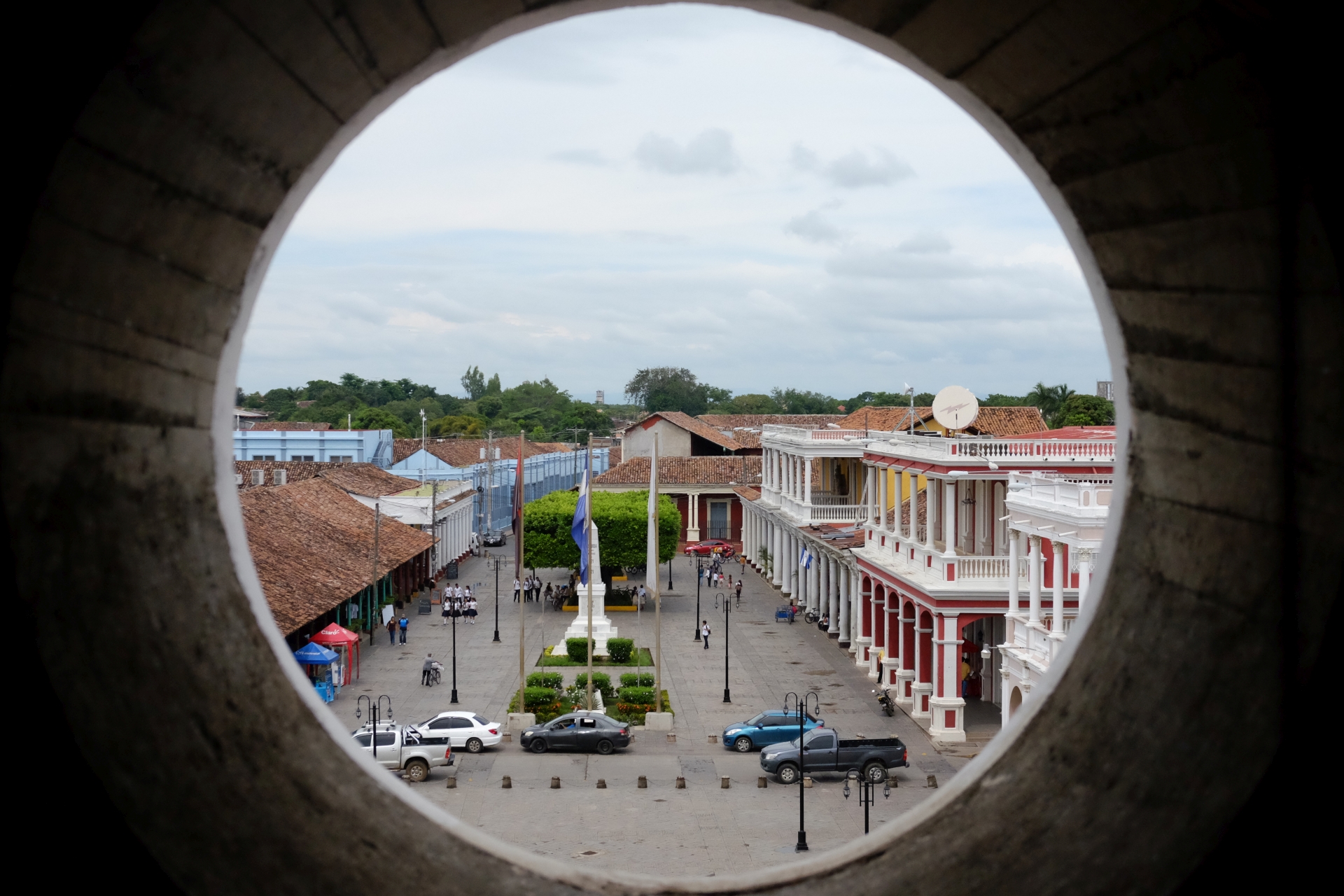 jojo:
what do i like?
-nicaragua is crazy cheap.  when i say cheap, i mean really cheap.  our meals have been in the 75-140 cordoba range ($3.75-7 cad) and we fully realize that granada is going to be one of the most expensive stops in nicaragua
-booze is ridiculously cheap.  we haven’t found ourselves drinking much over the last half year of traveling but when happy hour (which depending on the establishment, runs from 3-12 hours a day.) drinks are 30 cordoba/$1.50cad each and it’s 30+ degrees, it’s a really easy decision.
-colonial architecture.  we got a taste for it in antigua but granada really reminds us of spain.  the city is filled with colour, courtyards and amazing churches and it reminds us so much of one of our favourite stops in europe, oddly enough being granada in spain.

what do i dislike?
-the most touristy town of the trip.  parq central is lined with street hawkers (who aren’t nearly as aggressive and annoying as those throughout guatemala) and the horse carriages are lined up to give patrons tours of the city.  we don’t have good impressions of horse carriage rides as the horses typically spend all day baking in the sun, many look malnourished plus the areas that they operate in usually smell of horse droppings (aka: caca)
-what this translates to is a city filled with shit.  i watched a parade today that started from our hostel and ended at parq central.  once in parq central, the dancers and drummers continued on and marched around a two foot wide mountain of freshly dropped horse shit.  oh and while we were waiting for our kayak tour this morning we watched as a dog dropped a fresh load right in front of our hostel before the owner ushered him along.  in short: watch where you step in granada.
-lots of sideways glances from people and i haven’t been all too motivated to shoot here (photos, that is).  it’s probably part of the warming up process for the country but the poverty is very apparent and the mix between the haves and have-nots puts a bit of a wet blanket over the city.

what do i like/dislike about the new accommodations?
-the accommodations are great.  they’re so much more than we need or expected.  with a name like ‘the backpacker inn’, we were expecting a grimey hostel but instead were put up in a room with three beds, a chandelier and over 30 foot ceilings.  we actually thought we got put into a dorm room by mistake.  the colonial style and decor is intact and the service is amazing since we’re only one of three bookings at the moment.

-the small and empty inn also has two courtyards, one of which has a pool that is basically our very own.  daily use is a must once the sun is beaming down around noon.

biggest adjustments from the previous stop?
-the locals stare back with a straight face, sometimes even a frowning one, when you greet them with a passing ‘hello’, head nod or smile.  at this point i’m chalking it up to cultural differences from guatemala but this is the coldest welcome we’ve gotten since riga where it seemed like it was illegal to smile or laugh.
-nicaragua feels a tad sketchier than guatemala so far.  we’ve been openly warned by locals to avoid certain areas during hours that the police aren’t patroling.  on the flipside, our short time in managua felt safer than our stints in guatemala city.  guatemala city’s bus terminal is located in what i can only describe as the bowels of the city.  we had a female passenger who was having a panic attack on our bus ride into the city and she was screaming to be let out of the van as we were a few minutes from the terminal.  i couldn’t imagine a worse location to find ourselves pulled over and exposed; this neighbourhood made main & hastings look like a paradise.

what was our first meal?
-what better way to tempt fate than with street food in front of a church?  bbq skirt steak served on plantains and topped with a vinegar slaw.  80 cordobas.  my luck of ordering the only out of stock item on the menu has continued.  vijaron was the original dish i was after which is a granada specialty; chicharon (fried pork with crispy skin intact) served on top of braised yucca and topped with slaw, served on top of a plantain leaf.  the hunt continues…

overall impressions?
we’re about a day and a half into our stay in granada and i can already sense that i’m not going to fall in love with this city.  it feels like we can cover what granada has to offer very quickly and for that reason i think we’ll find ourselves heading out at the end of our three night stay.  while the city has lots of daytrip tours on offer it doesn’t feel like they’ve tapped into the historical and cultural aspects of the city to share with visitors.  calle calzada is the main tourist strip here and i’m not a huge fan of cramming all the visitors into a condensed area.  it gives the city a very unauthentic feel… almost theme park-like.

haha:
what do i like?
Granada has some pretty colourful buildings, the main Cathedral is very distinctive and beautiful.

what do i dislike?
Where to start…I do not like Granada at this moment in time and I am not sure if I ever will. It is dirty, there are street boys constantly begging for food/money, one main tourist street jammed with americano food at americano prices and there are warnings and stories of robbery. I find it ironic that the cab driver taking us from the airport to the bus station asked us if Guatemala was dangerous.

what do i like/dislike about the new accommodations?
The accommodation is pretty basic but has everything we need. Couple of sweet ladies who do not speak much English run the place so our conversations are pretty much one way jabberings.

biggest adjustments from the previous stop?
The heat and humidity is killing me. I have a permanent sheen of sweat on my face and my body is so sticky all the time. Same type of heat/humidity as Hong Kong but not much A/C in Granada. I am very tempted to just park my lazy self next to the hostel pool and only leave for meals.

what was our first meal?
I had a beef stew of some sort. There were big chunks of beef, yucca and plantains. The beef and yucca was delicious but I do not like soupy plantains.

overall impressions?
I definitely do not feel safe walking around at night. We are now in the habit of walking around with only enough cash in our pockets for dinner and the rest of our stuff we leave at the hostel. There are lots of young boys running around the touristy areas begging. They are pretty relentless and I find it really difficult to deal with.