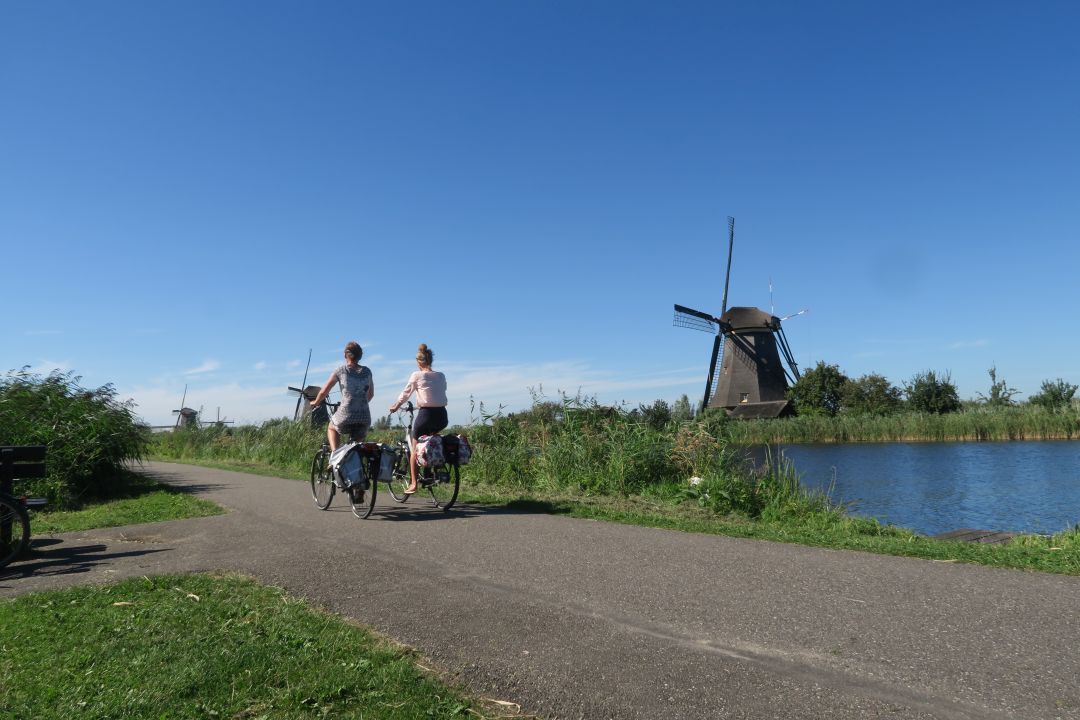 our biking adventures continued in the netherlands and haha has been making leaps and bounds over this year.  there are many daytrip options from rotterdam and while we originally planned to spend the majority of our excursions to the beaches we convinced ourselves to decide between either visiting a historic windmill area or the cheese capital of gouda.  we would have missed the weekly cheese market in gouda by one day as we would have been training our way to amsterdam so the windmills won out on this day.

so the kinderdijk area is comprised of 19 historical windmills that were used to pump water out of the surrounding riverways.  most of the netherlands is 7 meters under sea level so the dutch, as ingenious as they are, fabricated methods which allowed them to make use of their land as opposed to moving to higher ground.  from dams to windmills to massive projects of reclaiming land, the netherlands exists in its current state thanks to great engineering.

there were a few options to get there from rotterdam those being by public bus, tour bus, ferry + bus combination and by bike.  it is about a 45-60 minute ride by bike and the path is along some roads but we opted to go the public bus route.  the path is somewhat convoluted because there are two major waterways between rotterdam and kinderdijk so any land base route isn’t quite direct.  we traveled via bus and our journey took us about an hour and there was a stretch where we had no idea which direction we were traveling while we were on the bus.  in hindsight, the bus + ferry combo is probably the easiest way to get there and back but there are time constraints since the last ferry departs kinderdijk at 4pm.  you pass a number of suburban centers on the way to the windmills which was a bit of a surprise in comparison to other unesco sites we’ve visited.

we came across a tip to rent bikes for our stay which allowed us to venture further out past the area that the tour bus groups visit and this worked out really well.  the nearest souvenir store rented bikes for 3 euros per hour but because we got arrived in the middle of the afternoon, virtually all the bikes were already rented out.  haha ended up with one that wasn’t quite her size:

the unesco area is a long strip which is easily covered in 15 minutes on a bike and maybe a 45-60 minute walk though the sun can get quite hot as there’s very little cover.  we timed it after all the tour buses had arrived for the day so the entrance to the windmills had the majority of the crowds.

once past the first set of windmills and the museum, the roads were wide open

river boat tours are running for those who want a closer look at the mills.  there are also a large number of houseboats in the area.

oh and for those that aren’t quite into the sun, there are other options you can do in the area such as squatting under jackets:

renting bicycles in kinderdijk was a great way to see the sights, cover some ground and cool off in the heat as well!