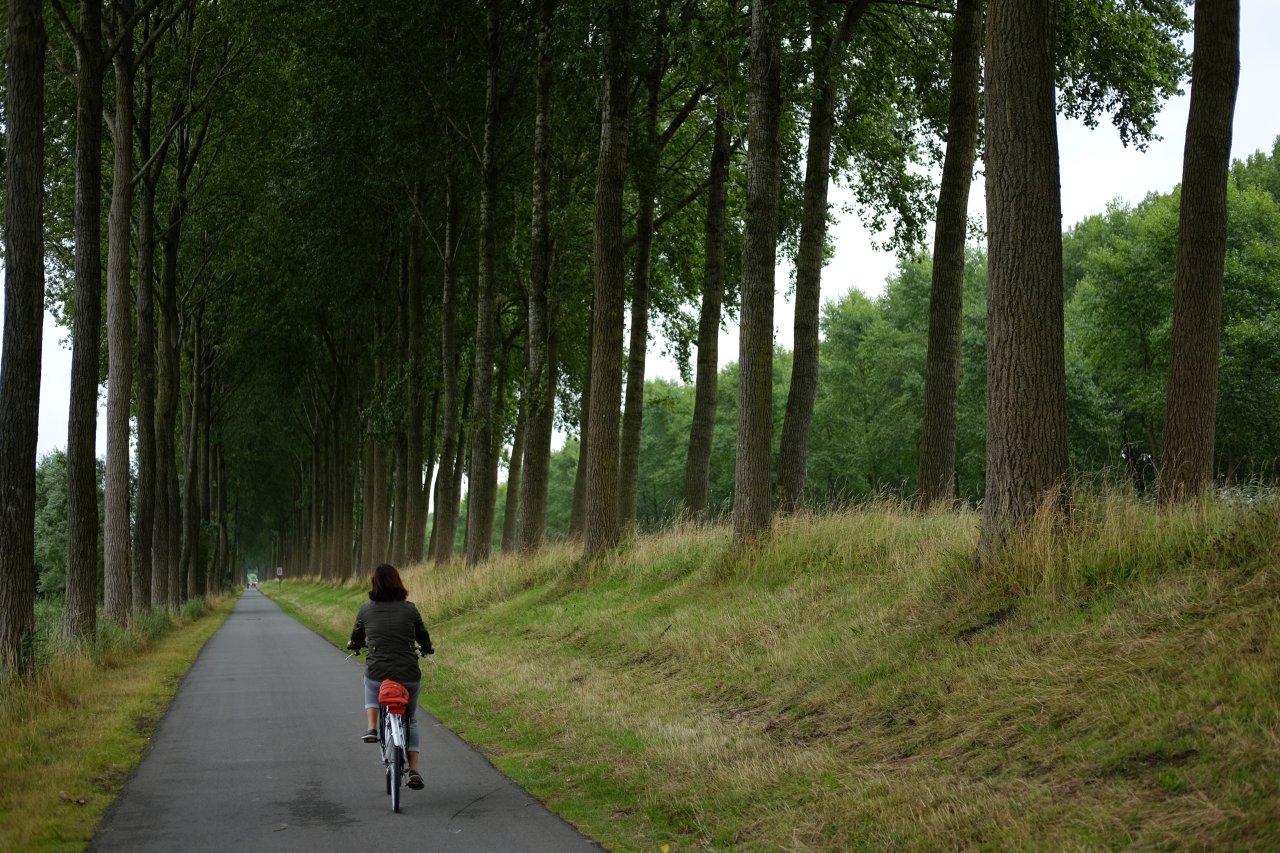 our last full day in bruges was actually not spent ‘in’ bruges.  we heard that the town of damme is very close to the city and that the bike paths are a really easy bike ride away so we went ahead and rented our bikes for the day from ‘de ketting’ bike shop.  its about a 10 minute walk from the belfry and two bikes for the day ran us a mere 12 euros compared to 26-30 euros that we saw at every other shop in town.  the bikes were basic but did come with gears, rat traps for backpacks as well as locks.  i’ve heard of markups but c’mon :/

our ride started at the southern gates of the city and curled eastwards until we arrived at the damme canal.

i’ve read varying reviews on this ride that ranged from ‘lovely’ to ‘dull’ and i’d describe it as scenic and relaxing.  the path was flat the whole way; as in not even a molehill of elevation, so essentially the easiest ride ever.  the start of our path eastwards is elevated against the canal but shortly thereafter, the trail dips and drops you into the middle of a poplar tree lined pathway.

the giant trees cover the sun and sky completely until you emerge from the otherwise to which you’re greeted by windmills! 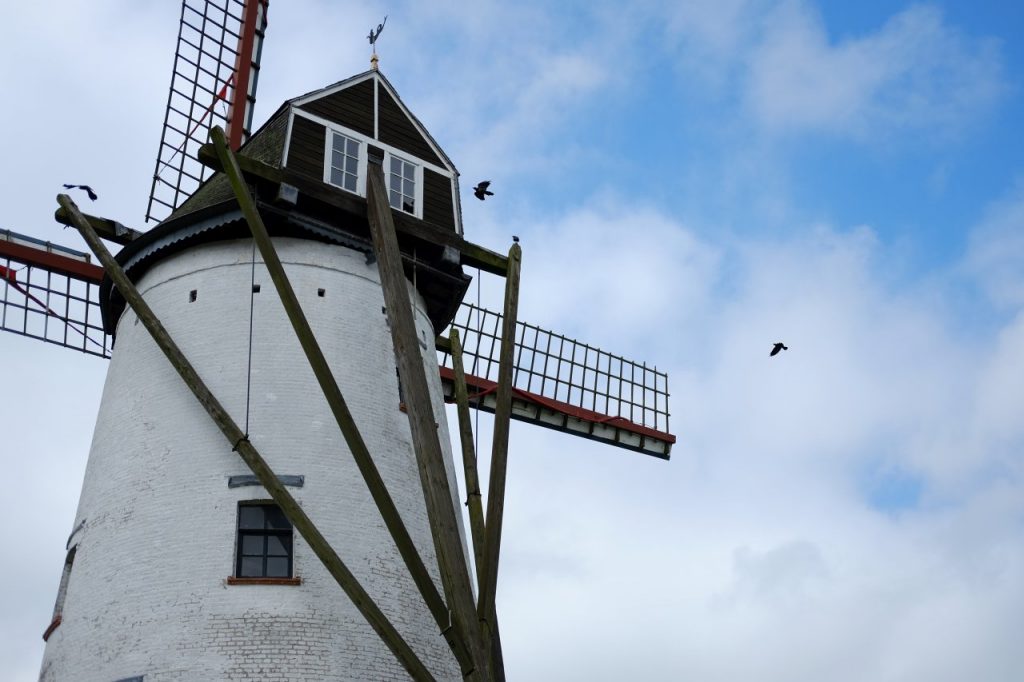 we arrived at the town of damme after what felt like 10 minutes though it was probably closer to 30.  the path was so easy that haha was comfortable to continue onwards to the next city, that being sluis… in the netherlands!  it was 8km away and the path was just as simple to follow as the damme canal terminates in sluis.  at this point we figured, why not, it was early enough in the day and we could get lunch in a different country.  in hindsight, i’m really glad that we chose to do so because sluis was busier and the countryside was just beautiful to take in.  we haven’t seen greenery like this since croatia having spent the better portion of the last 1-2 months in stone & concrete jungles.

sluis is a town of 23,000 people and is located in the south-western area of the netherlands and like bruges, has flemish roots.  a short ride through a gravel path and some ponds brought us to the city center and we parked our bikes to explore further.

the town was bustling compared to damme and i don’t think i’d be lying if i said that it seemed more energetic than bruges.  people were out in full force on the patios, soaking up the sun as they indulged in their pots of mussels.

being the bringer of non-shellfish meals, i pathed us away from the restaurants that would’ve had me eating an epipen for dessert and we ended up at a dutch pancake house.  one thing that i’ve noticed since we arrived in brussels is that the wait staff do not tell you how large the portions are nor do they question if you’ve ordered too much food.  nearly every meal we’ve had this week has been gargantuan in size and this one was no different.  each of our pancake orders turned into two plates consisting of one 40cm pancake in diameter.  40.  forty!

we were plenty full having each had 1/3rd of each of our pancakes however i remembered what i was taught as a child to not waste food so we/i continued to attack this monstrosity with a purpose in mind.  as i got down to the last few bites i could feel pancakes pouring out of my ears as well as my dad’s eternal words of knowledge ‘don’t make yourself sick’.  well, i failed in both.  and still had to muster up the strength to ride our bikes an hour back to bruges as well as fight off a food coma.

sluis is an interesting town.  it has the charm of an old town, the bustle of a tourist town and most bizarrely of all, was home to two michelin star restaurants… in a city of only 23,000 people.  one of those restaurants had closed in 2013 and was one of only two restaurants in the country that had attained a three star ranking.  how oddly random.

after the pancakes fought their way down from our throats, we started home to bruges.  the flipside to all these beautiful waterways is that the water isn’t necessarily the freshest.  while we didn’t encounter any during our stay, i can only imagine the potential of mosquitos in the area around the evening/fall.  though if you’re local and not a big pansy like me, you could be like this swimmer who was doing laps up and down the canal.

on our way home we did stop in damme.  this town is much smaller than sluis and basically just one main street so we had enough time to visit the lady of damme and climb its 200-something steps to reach the rooftop for the view of the surrounding countryside

and the view from the top of the tower…

the ride home was very quick and we didn’t notice many bikers out in the early evening hours.  we were thankful that unlike our rides in cascais and kamakura, we didn’t have to contend with any hills at the end of the day to give our legs any additional challenges.

haha still isn’t that comfortable with being on two wheels but i think that she turned a corner this day.  the route we picked was close to 35km round trip with some narrow areas where we needed to share the path with oncoming bikers and she did great.  powered through like a champ.  she even made it over all the cobblestone roads with her butt intact considering that these weren’t the cushiest of seats.  bruges is pretty in its own right but if you have a day to spare i’d really recommend taking a daytrip like this to get out into the countryside.  its so peaceful and serene and its a nice break from the manufactured core of the city.  plus, how many times can you say that you’ve cycled to another country?