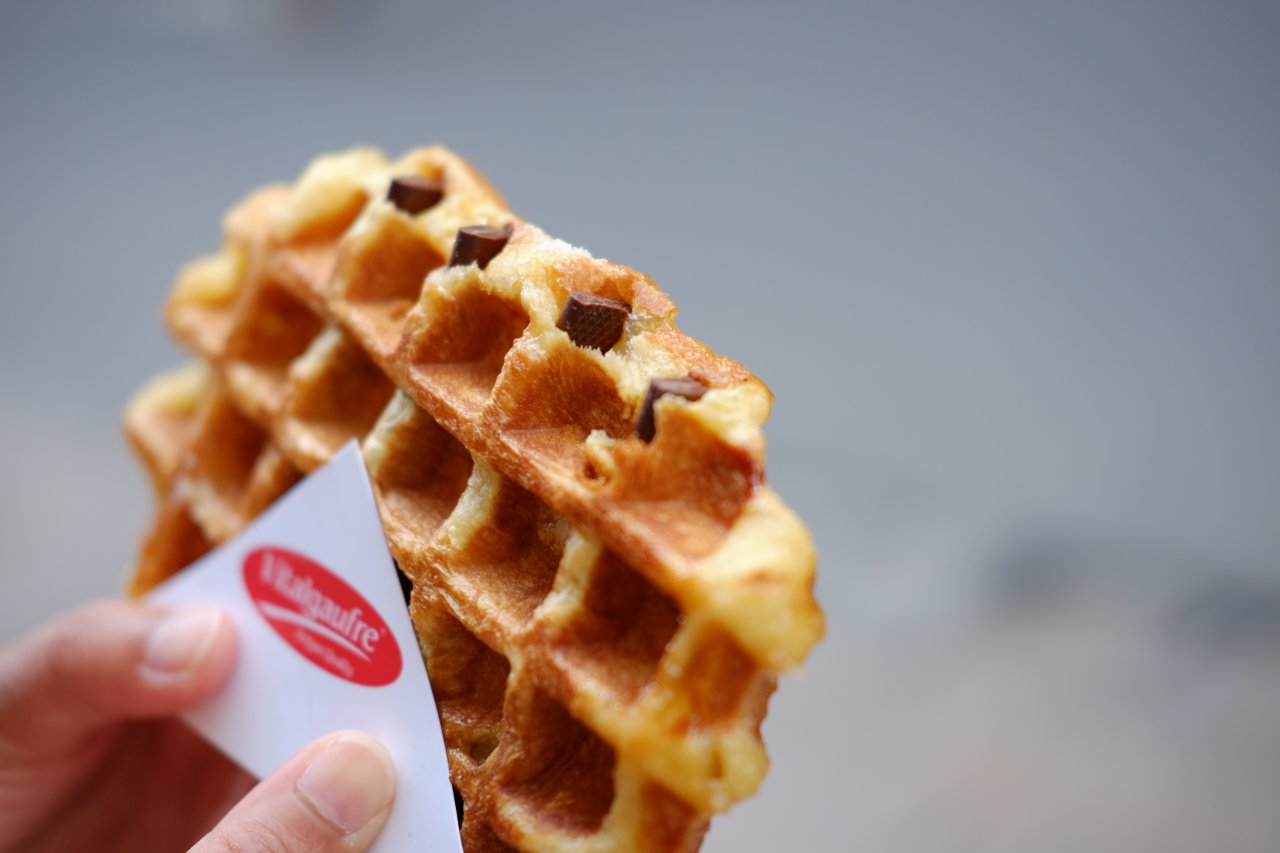 what brought us to belgium?  well for starters, the food… i thought i knew so much about junk food but my years of eating like crap taught me nothing.

waffles – maybe the most famously linked food to the belgians is the waffle.  yeah, those ones, sprinkled with toppings with giant dollops of ice/whipped cream.  well before you get to that part, you need to decide what type of waffle you want.  there’s the liege waffle which is the most popular style; dense, slightly chewy and staring back at you with a caramelized glaze.

and then you have the brussels waffle which is square in shape, lighter, crispier and served hot (not that the you can’t get liege waffles hot) otherwise they become too crispy or soggy once reheated.

chocolates – belgium has no shortage of famous chocolatiers and while i’ll fully admit that we couldn’t hold off from visiting a few, we didn’t blow the bank on chocolates which is very possible!  as we were staying in the sablon area, many chocolatiers have a shop in the neighbourhood and all a different claim to fame.

pierre marcolini – the rolls royce of chocolatiers just by aesthetics.  their stores are dressed up like jewelery stores with chocolates on display as individual items (as in one truffle in a 1×1 foot space)
neuhaus – the inventor of the praline
wittamer – supplier of desserts to the royal family
just to name a few…

fries – fries… oh fries… i tried so hard to make this happen however my attempts at visiting fry shacks around town and not within the touristy areas were thwarted with each attempt.  timing has never been my strong suit and it seemed that august is typically the month when many locals leave the confines of their own town for their yearly de-stressing in the countryside

ironic that this is how i felt once i saw the closed shutters
i did finally get my fry fix in bruges and for 3 euros, lets just say that it singlehandedly put me off potatos for a few meals.  as our fries were being served up, we ended up with what looked like a whole basketful of fries, enough to feed four people and enough mayonaise to make a dozen sandwiches.

contrary to what dessert and junk food stands around the world make us think, there is more to belgian food that trio of regret.  flemish food is very similar to french cuisine however with richer sauces.  one dish that i had been eyeing in particular was the carbonnade flamande, a flemish version of beef bourginon made with beer rather than red wine.  i ate this dish twice, once in brussels and once in bruges and the brussel version had me licking the plate clean.

i did have a similar dish on our last night in bruges which were the flemish meatballs.  rather than just beef, the meatballs were made with a mixture of beef, pork and veal and the sauce included beef and cherries stewed until everything was this magical balance of richness with a touch of sweetness from the cherries.

we happened upon a chinese restaurant that handmade their noodles AND had sidewalk seating.  i couldn’t help but be skeptical but after noticing that the majority of their patrons were speaking mandarin and scouting out their noodle bowls, we stopped in to share a bowl after we walked off our lunch.

out of curiousity, i looked up reviews on au bon bol (a good bowl) after the fact and through the pile of reviews left by non-asians, this one summed it up pretty good

Overall: 3.5/5 The service could be a lot better, also this place isn’t really an example in terms of hygiene. (not that you’ll get sick if you eat there but it’s genuinly asian, if you know what i mean) BUT, it’s a restaurant and their food is GOOD

this wasn’t a great bowl of noodles but they were certainly the best physical noodles i’ve had since taiwan (sigh!).  out of the many people complaining about unfriendly service and less than perfect sanitary conditions… welcome to legit asian dining.  good service from a chinese restaurant?  laughable 🙂

belgium was kind to us on the food front though the selection of food wasn’t great.  we found that many shops were closed up for a few weeks which made our food adventures a little more, well, adventurous.

One thought on “dieting in belgium: waffles, chocolates and fries”