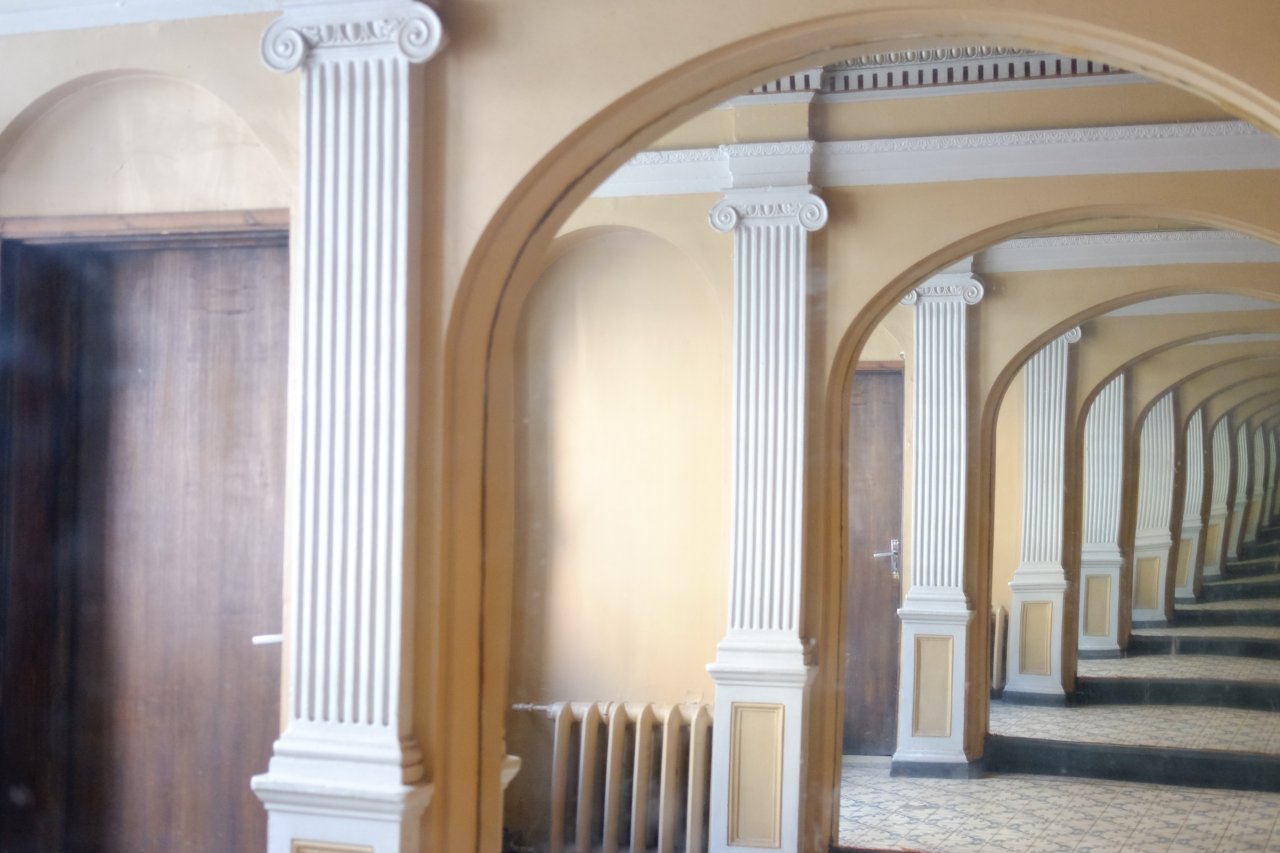 our daytrips in riga were sidelined for the most part due to weather but one sight we did get to check out in the city was the kgb headquarters, otherwise known as the ‘kgb cornerhouse’.  this exhibit opened in 2014 after being unused for nearly 7 years.  the building sat dormant after latvia gained its independence from the soviet union in 1991 and for a few years since that time it was used as a police station.  nowadays the building is open 7 days a week however the future is still up in the air as funding sounds like it could be an issue.

when i read up on the kgb cornerhouse, i was under the impression that one room was open to the public and by paying for a guided tour (5 euros), you are able to access a few more rooms.  as has been the case in europe, communication is never as straightforward as it could be and in the case of this building, we got a lot more than we expected.

from here we were taken into the main entrance of the building which was left untouched.  the design that was used at the front was used in many buildings at the time with mirrors on each side of the hallway to stretch the dimensions to infinty.

the building itself was built by a latvian architect who had built many others in the city of riga.  ironically enough he was imprisoned within the cornerhouse once the russians took ownership of it and had his life taken as he was deemed ‘uncooperative’.  this was a routine happening and the further through the building we went, the worse the stories got.

so how it all started was that the soviets assumed control of latvia in 1940 and deemed this commercial building to be useful for their purposes.  in a span of six months they built 40+ cells into the ground and basement floors and these cells went on to house nearly 200 people at any time.  over the course of the next year, the ‘year of terror’ saw thousands of latvians brought into the building for questioning which usually lead to torturing, imprisonment, deportation to soviet prison camps and in some cases, even death.  many kgb agents were mixed into the general population as there were nationalist groups the soviets sought to infiltrate.  so to this day, many ex kgb agents probably still live in riga with nobody the wise.

a walk through the entrance brought us to a hallway that looked like it had been through a battle.  the walls were peeling and chipping and rust could be seen on almost all of the metal pieces in the room.  that hallway was connected to a longer one used for the admittance of new detainees, an interrogation room as well as some prisoners cells.

many higher educated people (doctors, poets, writers, teachers) and military personnel were considered persons of interest and were the prime targets for the kgb.  a simple knock on a door in the evening could turn into a trip to this cornerhouse with no worry about leaving unattended children in the household.  any subsequent visits by family members to prisoners would have to be left as a request with the staff.  the building was known to be kgb headquarters and was a symbol of terror over the many years it was occupied.

we were then taken downstairs into the kitchen.  the condition of this room was also quite poor.  a large heater/range was used to cook the inmates’ meals though it sounded just as bad as the imprisonment.  any raw ingredients used were not fresh, potatoes were not washed before being boiled so they would be served up with sand in the bottom of the plates.

an outdoor area was available for exercise time though the size of these two courtyards was barely the size of two bedrooms, meant for the whole lot of inmates.

the basement was used for inmates who qualified themselves as being fit for rougher conditions.  beds were available but the temperature was much colder down there, sometimes wooden boards would be used to sleep on, there was no light and mud was always present in the cell.

also located in the basement area was a nuclear bunker which seems fitting of the soviet times.  we didn’t get to see this as it was blocked off.  in fact, only portions of two floors were open to the public.  the interrogation rooms were located on the top (i believe the 6th) floor of the building.

the last room we were taken too was the killing room.  used for roughly 200 documented executions, this room was dubbed ‘the garage’.  shootings would usually happen in the early mornings and a running truck would always be outside in the courtyard to muffle the sounds.  everything the kgb did was on the hush hush as compared to the vicious, genocidal nature of the nazi armies in poland (that we learned about last week).

the tour was slightly graphic and i probably wouldn’t recommend bringing a child to visit all of it, especially the killing room.  the video on loop is from a film depicting a similar killing room whereby victims are brought in one at a time, confirmed their names and then on the receiving end of a bullet in the head.  two girls from our group walked out midway.  while i wouldn’t call this a tourist attraction per se, i thought it was a good recounting of latvian history as the country had to live in terror over three regimes.  they gained their independence after the first world war then lost it to the soviets after the start of world war two, were under german control until the end of ww ii and then went back under soviet rule until 1991 when the ussr crumbled and the iron curtain was lifted.  i do hope that they get the funding necessary to continue to stay open as it looks like there is a lot of interest from people to visit.