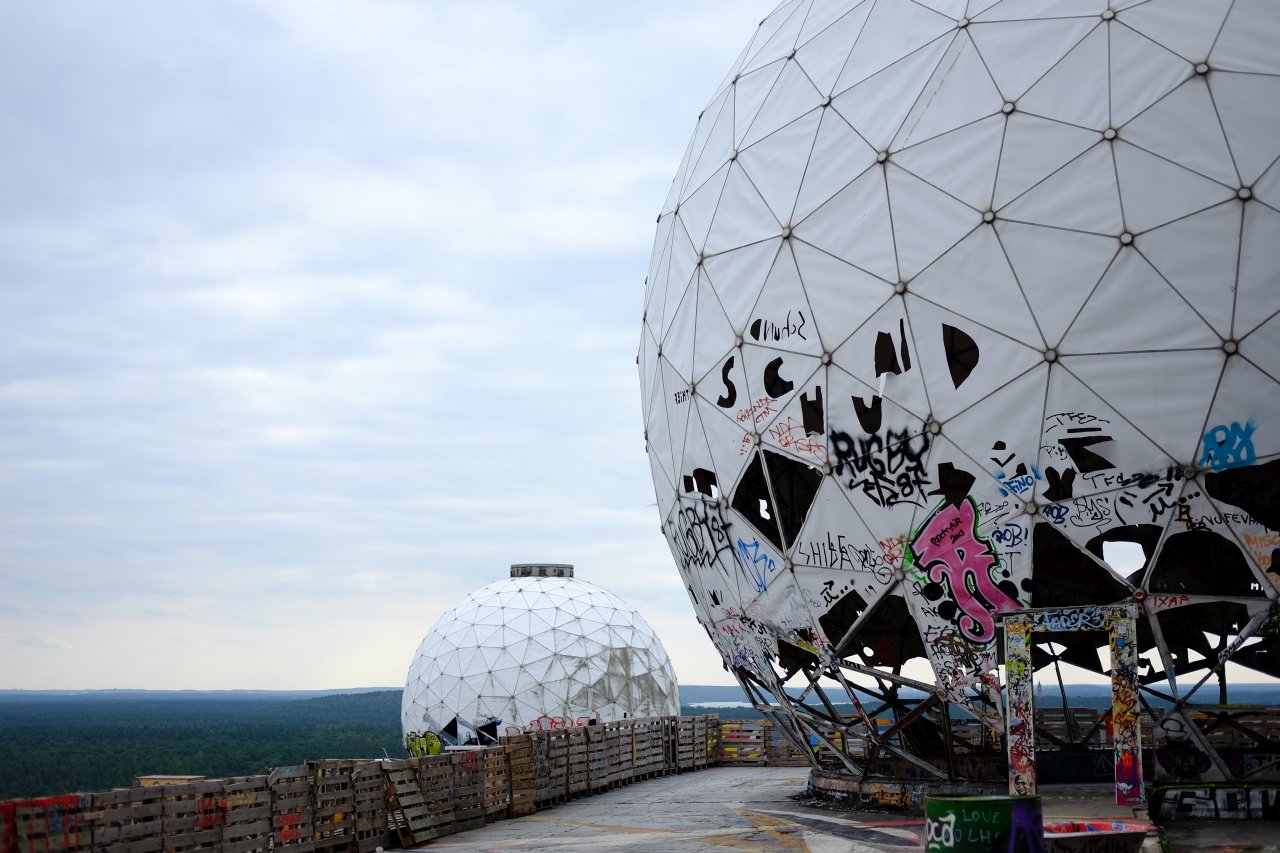 i was googling things to see in berlin and sifting through the seemingly endless list of attractions when i came across a listing that stood out to me… teufelsberg.

the summary was interesting and the more i read about this place, the more i was hell bent on going.  from everything i could find out, this place was a spy station for the nsa when the american forces were stationed in germany during the cold war.  it was built for the americans to spy on the soviets, there were rumours of escape tunnels built under the compound, the translated name in german means ‘devil’s mountain’, the five globes that make the compound so distinct remind me of our very own expo 86 monument, the place is literally painted on from top to bottom with graffiti & street art and if all that wasn’t enough to pique someone’s interest, the entire hill that it sits on is built on top of an estimated 12 million tonnes of world war ii rubble that was piled on top of a nazi college that could not be destroyed post-war.  i couldn’t even believe what i was reading, all i knew was after all the pictures i had looked at, i wanted some in my collection.

we had a limited number of sunny days to work with in berlin and as the days came and went, i still had not made it out to teufelsberg.  on our last full day in the city, the weather was looking ever so grey and i wavered on whether or not to make the trek out to grunewald forest, lest i get caught in a downpour.

after a whole lot of hummming and hawing while munching down my lunch underneath the u-bahn tracks at burgermeister i pulled the trigger.  i took the metro to the grunewald station on the west side of the city and started on my walk into and up to the middle of the park.

and i walked.  and walked.  and walked some more.  20 minutes down a grassy pathway following two girls brought me to a pond that didn’t offer me any sight of the spy towers.  i flagged down a dog walker for help and he kindly pointed me in the right direction.  he eventually found me struggling to make heads or tails out of his directions so he offered me a ride to the top.  now i normally don’t make a habit out of hopping into strangers’ cars but he had two cockerspaniels with him that didn’t look all too vicious.  the mother of the two was dragging ass and didn’t seem like a pet that a serial killer would’ve had (although a smart serial killer might have).

it wasn’t terribly easy to find details on the ins and outs of this station as it has gone through a lot of changes over the years.  at one point it was completely abandoned and and people used to come here to steal any salvagable metals they could get their hands on.  another stretch of time, it was under foreign ownership and the security guard was running paid tours without their owners knowing, prior to this a student was running illegal tours of his own.  i’ve also read that there had been holes cut into the perimeter gate in order to sneak in and avoid the 7 euro entry fee but that over the years, they’ve been patched up but possible cut out again.  although that 7 euros could have come in handy for another portion of currywurst, i’m too old and lazy to try said things so i paid my entrance fee, cluelessly hoping that some of that makes it back to or indirectly inspires the artists to continue doing what they do best.

a short walk up to the compound after the entrance gate brings you to the offices.  the lower ball wasn’t open on the day that i went but the three large ones were.  when i say ‘open’ i more or less mean that it wasn’t boarded up.

i have to assume that there are people living onsite nowadays with a treehouse, camper vans and a garden off of the rear garage.

two floors of the main building are open and on those floors are huge landscape murals standing up behind one another.  it felt like a gallery and it was just as quiet as one.  i wasn’t the only one around snapping shots in fact i’d say that half of the people i ran into were over 50 years of age and really taking their time between paintings.

on the fourth floor is the rooftop, the entrances to two of the balls as well as a sweeping panoramic view of the city.  it was so quiet and peaceful, i wish i could have caught a sunset here but that will have to wait until the next visit. another 4 floors up around a hollowed out elevator shaft (and through a few steps in the dark) is the highest sphere.  with most of the protective canvas being cut out of the bottom balls, the sound doesn’t resonate too strongly.  it’s completely different up here as there’s one small window-sized gap to the outside so any sounds echo for nearly five seconds.

the first few deep breaths i took got my head twisting left and right to see who was standing next to me from the echos.  the sound reverberated so quickly that it sounded clear as day from directly behind my ear.  it’s a great place to do some sound tests, some people brought some music, some whistling, some even testing to see how far their whispers will travel (which make it to the other end of the sphere).  it would’ve been cool to get some instruments up there but unfortunately nobody lugged a saxophone or guitar up all those stairs.

i’d say that i spent nearly three hours walking through the compound and went at a very slow pace.  it was great to sit up top and stare across the horizon of the city, a city that has transformed so much during the lifespan of this building alone.  i would have to guess that a lot will have changed over the next few years as there would definitely be a demand to see an attraction like this.  i mean, 50 people showed up for a street art tour around town and the donations paid to the guide were nearly the same price as to get into teufelsberg.

i love places that this odd mystique about them and i won’t be forgetting teufelsberg anytime soon.