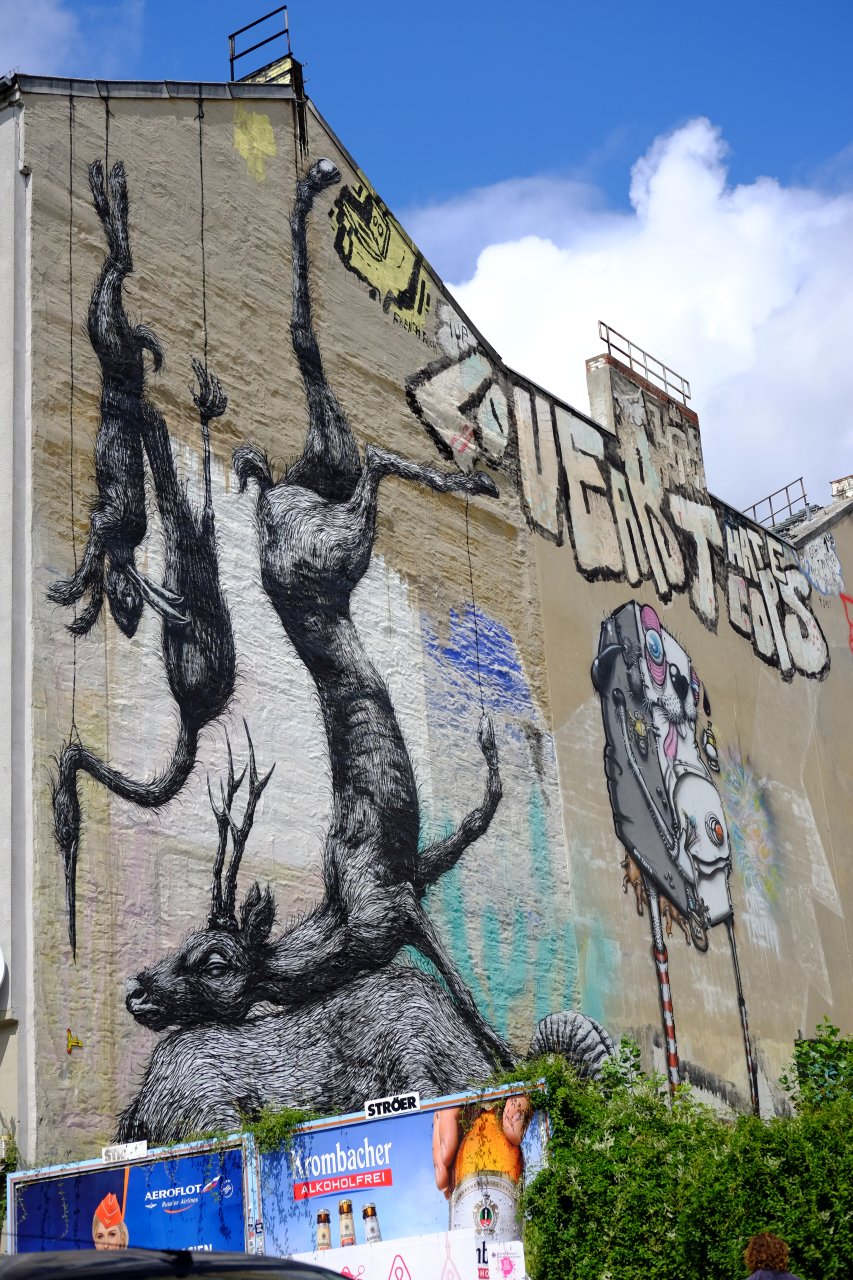 berlin has been given the title ‘creative city of design’ by none other than unesco itself and after spending nearly a week there, i can understand why.  the ethnic diversity is so strong that the city has turned into a melting pot of cultures which can be seen all over town.  the architecture isn’t as cutting edge as i had expected but having said that a lot of the city has remained true to its roots.  many of the older communist and nazi-era buildings are still intact and provide a stark contrast to the modern architecture.

since we’ve made it to europe, i’ve felt like i’ve been dropped off in the middle of a graffiti haven.  virtually every city this trip has had something unique to offer in terms of street art from seoul’s mural village <link> to granada’s gorgeous sketch collection by el nino de las pinturas <link> to lisbon’s plethora of styles <link> and it felt like it was all building up for berlin.

i was surprised to learn that the graffiti scene started as far back as the late 70s in east berlin.  back then, the wall was still in its heydey and many artists were restricted to half a city.  after the wall came down in 1989, people and artists streamed over to west berlin and the graffiti scene expanded quickly to neighoubourhoods like mitte and friedrichshain.  nowadays it has evolved into street art all across town with the longest remaining stretch of the berlin wall bearing the most popular murals in an area called the east side gallery. when we arrived the wall was going through a touchup and was fenced off for artists to work on.  the side facing the water also had a photo gallery chronicling war in the middle east most specifically, amputees and permanently injured civilians and their families having to cope with the actions of war.

over the next few days i walked around with my eyes peeled and hopped off the u-bahn (metro) whenever i saw something i wanted to chase.  one stretch between bulowstrasse and nollendorfplatz was just such an area.  i hopped off and followed the murals…

as i was snapping pics i noticed a couple who was also adding to their collection of pictures.  they were a local couple couple in their 60s and big fans of street art.

i also tried something different this week and showed up to a street art tour.  while i was expecting a relatively small turn out, nearly 50 people showed up and the group had to be split into two, each going their separate directions with one of the guides.  the tour lasted three hours, started in alexanderplatz and ended in (my favourite) neighbourhood of kruezberg.

there are a lot of famous artists that have made their mark in berlin over the years, a few of them are…

since these are posters put up with glue, how he does the confetti portion is he rolls the glue over the canvas area and tosses the confetti up (reminds me of the saying, throw sh!t at the wall and see what sticks)

our second stop was a small alleyway/courtyard home to a few bars and berlin’s workshop for the blind.  on one half of the courtyard are random tags and paintings and the other side featured large murals. so one thing i noticed was that the percentage of posters to paintings is much higher in berlin than i’ve seen in other cities.  in fact, almost all the other cities we have visited to this point featured the work of spraycans which generally takes much longer to complete a piece.  we were told that the fines are quite different if one was to be caught postering or painting a wall which is one reason for the larger number of posters.

our next stop was near ostbanhoff station and exiting the station features a large piece from jr.  he’s known for black & white portraits of locals, usually seniors, which he adorns to neighbourhood buildings that have significance to the subject.  in this piece, the man lived in the area and the woman on the right used to be a postal worker in the building

we then walked to a jamaican compound called yaam which felt like we were on a beach… in the middle of berlin.  a sandy place to kick back and have a drink along the waterfront, a small soccerfield to kill some time and surrounded by tagged and marked buildings as far as the eye can see. these brick portraits can be seen all around town but aren’t as well received as some other pieces.  all of these pieces have been commissioned by levis jeans and have caused some backlash by street art ‘purists’, if you will call them that, for not remaining true to their roots.  i won’t get involved in that argument but you can see that they’ve even muralized their feelings with the angry mob to the left of the portrait.

the remainder of the afternoon brought us back to the kruezberg area.  many large pieces are scattered throughout this neighbourhood and it’s so walkable (not that any of berlin isn’t) with lots of cool restaurants and cafes. one of os gemeos’s pieces, brazilian twins that are famous for their oddly dressed, proportionate and overall curious looking yellow people.  my brothers! we ended our tour at victor ash’s astronaut piece.  this giant painting was sprayed on and you can still see the gridlines that were used to create it this is barely the tip of the iceberg.  berlin has countless other areas that have artwork lining their walls.  in fact, berlin is claimed to be the most tagged city in the world and after our short stint here, i couldn’t argue that in the least.  i can’t wait to come back to see how much the city has changed.

i also have another post coming from my time at teufelsberg, an abandoned nsa base from the cold war era in the southwest part of the city that has since been unofficially turned into a treasurechest of paintings.  more on that soon…