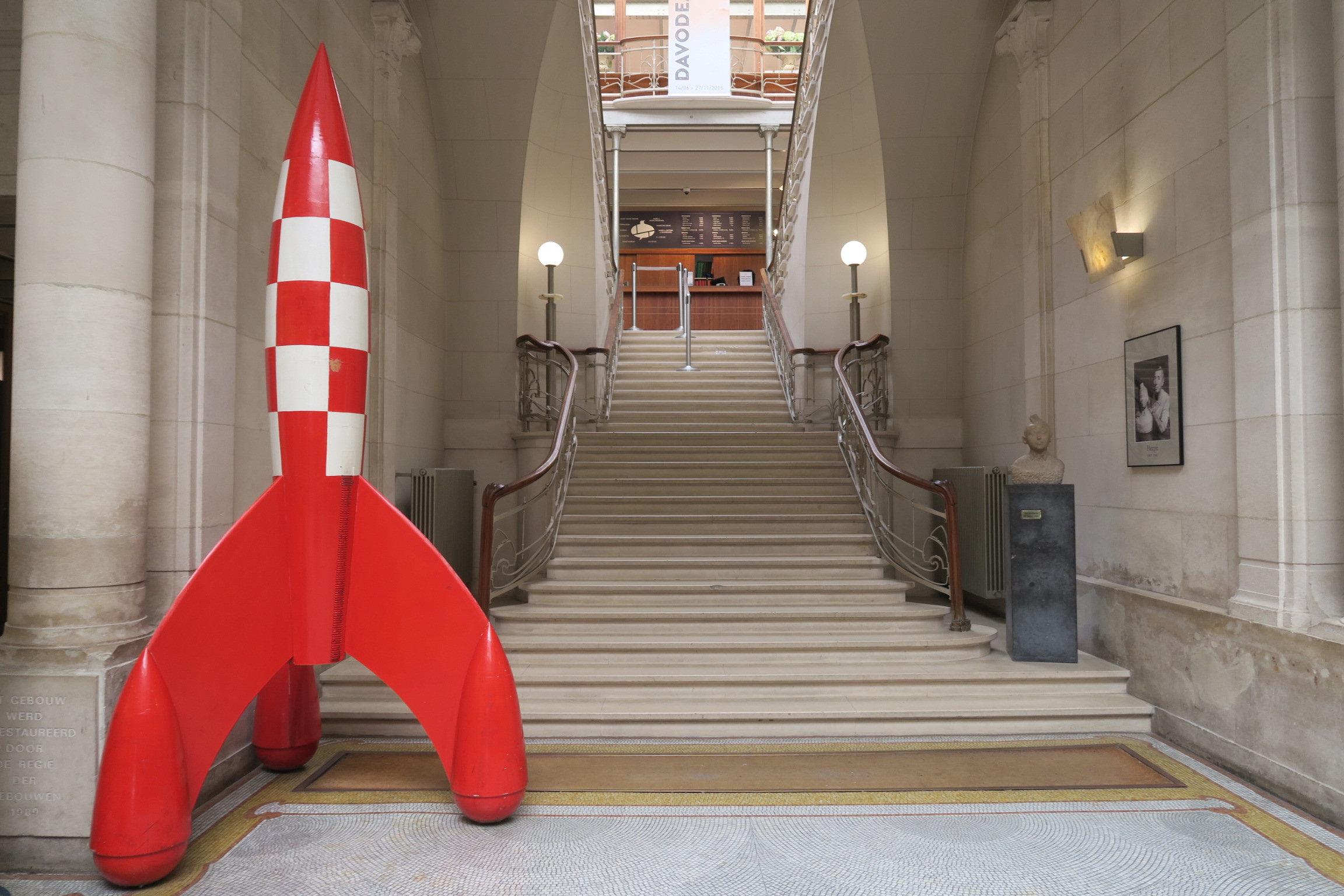 jojo:
what do i like?
-comics, cartoons and street murals all wrapped into one
-back amongst the french which means the pain au chocolat diet is back in effect.  booyah.
-love the old architecture.  i know i’m being hypocritical because i’ve had my fill of ‘old stuff’ but brussels has this historic charm about itself.  the art deco & nouveau style is very prevalent, all the rooftops of the buildings are very detailed, the cobblestone roads remind me of portugal and the patio seating is back to the french style where seats are facing the road instead of each other
-the birthplace of tintin!

what do i dislike?
-we’re not in kansas anymore.  croissants are more expensive than paris.  now that i think about it, they’re still cheaper than back home.  sigh…
-ryan air.  now i know why it’s a discount airline.  not only are the departure times merely a suggestion but the majority of the customer base is annoying as hell.  our flight was delayed over an hour with no communication by staff to let people know and we arrived in brussels with 20 minutes to pickup our bags and take our last shuttle (which we prepaid for) to the city at midnight.  we made it with a few minutes to spare, arrived at our airbnb at 130am and everything, i mean EVERYTHING within a 1km radius of us was closed.  not even a convenience store was open.

what do i like/dislike about the new accomodations?
-i never would’ve thought this to be the case but we’ve been spoiled from spending all this time in eastern europe.  paying 30% more for a place in brussels compared to riga landed us in an old (one could use the term heritage but i’m going with old) with creeky/wobbly/moving floorboards, damp smelling hallways, doors that sound like they close but not really and a bathroom that is half a floor below us off the public stairwell.  it’s been two days now and we still aren’t sure if it’s a shared bathroom or not.  the full length window of the shower is also facing our small court/backyard and i have no idea if the windows are mirrored or not.  i’ve just stopped caring.

biggest adjustments from the previous stop?
-the differences between the european regions are night and day.  in both regions we have legitimately old buildings that have been standing for over a century.  in the east however, the redevelopment game is fully underway and old units have been either gutted and renovated or modern condos have taken their place.  from what we’ve seen so far, brussels has very little new development in comparison so the old european charm is intact.  this is how i envisioned europe before my first trip here two years ago so it has a certain sense of nostalgia for me.

what was our first meal?
-our first meal was actually a breakfast this leg.  we gave up hope trying to find something to eat in the middle of the night so we had gone without food for 20 hours.  all i wanted was a fat ass breakfast so we checked out a place called peck 47.

overall impressions?
i think haha and i might have differing thoughts on brussels so far.  i really like it though it’s one of the few cities that i feel like we’ll be ready to move on from by the time we leave.  my main draw for brussels is the tintin museum and to a lesser extent the jean claude van damme statue (oh how i wish i could eat mussels in brussels.  DAMN YOU JEBUS!).  oh yeah, the grand place looks pretty nice too.  also really excited to sink my teeth into some french pastries again not to mention french food in general.  the brussels version of a beef bourginon uses beer instead of red wine which sounds oh so yummy.

At this moment in time, I’m not sure I like Brussels. There are lots of nice churches to see but most of them are in need of renovations or are being renovated. Once in awhile there is a nice smell of waffles in the streets which momentarily masks the occasional musk of street stench.

Oh yeah, we did stumble upon a Chinese noodle restaurant with hand-pulled noodles. We ordered a beef noodle soup to try and it turned out to be pretty decent.

I must have been spoilt by eastern european countries where they have spent their EU money on making their cities pretty again. Brussels does not seem to care what their city looks like. Pavements have cobblestones missing, looks like sidewalks have not been power washed in many months based on the amount of moss and weed build up, streets are dirty and smelly, buildings are dirty, lots of shops are closed because city residents take their vacations in August.

Our hotel is old and the bathroom is not ensuite. It’s not a huge inconvenience but it does reenforce the fact that we are not hostel type of travelers.

There is a lot of police and military presence in Brussels due to recent terror attacks in the city. It’s a bit shocking to see army guys with giant guns walking around. I think their presence made me feel more unsafe than any other city we have been in with the exception of Manilla.

Eggs benny with crispy bacon. I haven’t had crispy bacon since I left home, it was a nice surprise.

Brussels has been underwhelming. I did not expect it to be so dirty and rundown. It could be prettier but the city has not put in the effort. Being the capital of the EU, one would expect the city to do a better job maintaining it.