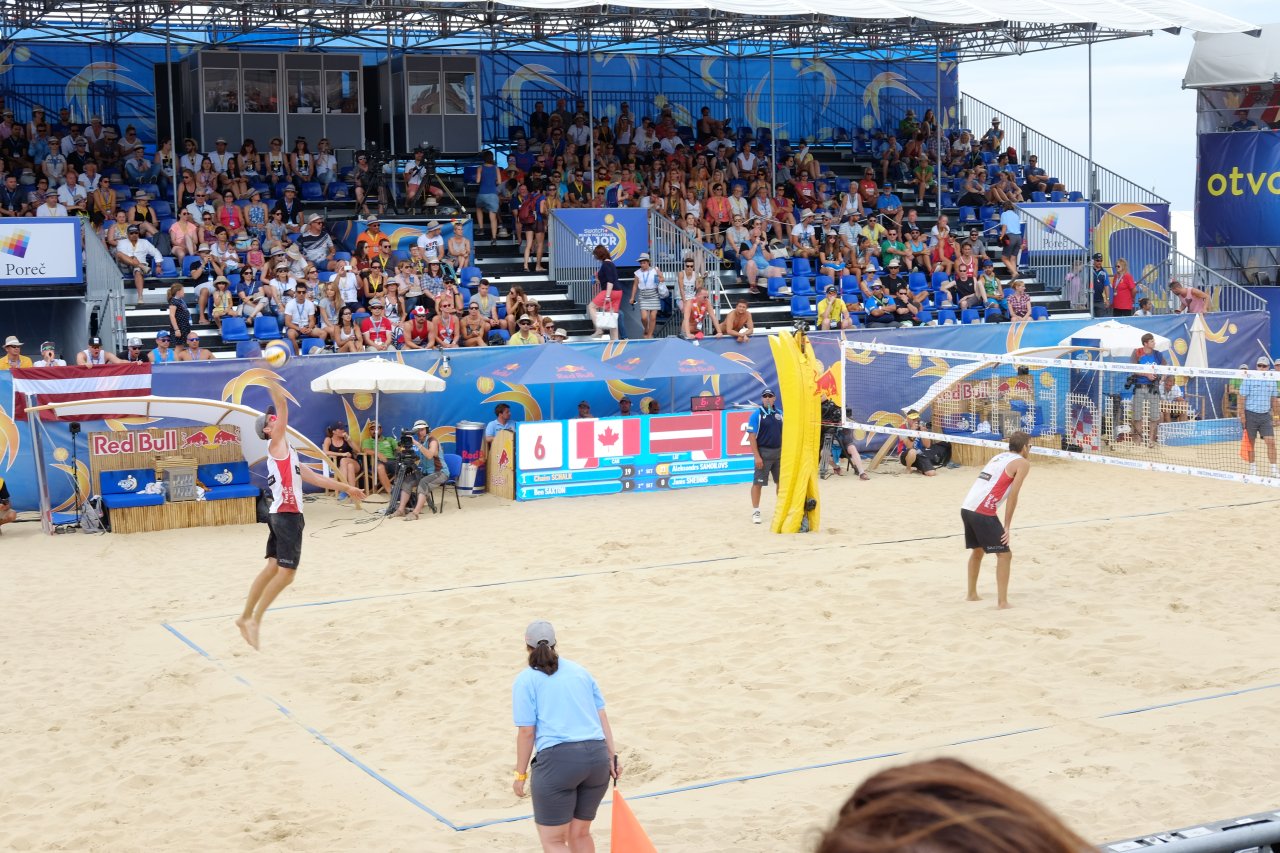 porec was hosting a professional tournament on the weekend that we were in town.  the finals were being played on the first full day we had in town and it was a pretty big production.  in fact, i’d say it’s bigger than anything we’ve organized back home with the exception of a hockey game.  lots of booths to dunk your friends in water, drench your liver in beer and to get freebies, we had to post our picture to social media

all for these hats…

haha’s as much of a volleyball junkie as i am with my sports so we spent a few hours taking in the matches.  it turned out that the match for third place was between latvia and canada (woohoo!) so we got a chance to represent!  unfortunately we didn’t have any facepaint packed in our bags 🙁

i’ve never seen live competitive volleyball before and there was a lot to take in…
-the players cover a TON of ground.  i’ve seen beach played before but nowhere near this caliber.  so awesome.
-the stands were packed, loud and very coordinated.  everybody does this coordinated two-armed praying motion on blocks and have small dance routines when certain songs come on
-said songs suck.  as this was a professional volleyball event, i have to say that volleyball music sucks.  woot there it is?  really?  the vancouver grizzlies used to have the worst music in professional sports.  this is easily worse.
-there is not nearly as much high fiving and ass slapping in the men’s game as there is in the women’s game.  need to observe a women’s match next to confirm
-there is an oddly large amount of missed serves.  i would liken this to watching us serve in tennis and we don’t have thousands of fans watching us.  there’s still hope for me to become a professional volleyball player.

the latvian team had actually made it to the olympics together so canada had it’s work cut out for them.  canada won the first set and was up 7-2 in the second set but gave up a huge run of points and this one went to a third set.  it was tight to the very end and canada squeaked past them for the victory.  i thought it was pretty cool that one of the girls in front of us was wearing a canada jersey and was VERY emotionally tied to the team even though she wasn’t canadian herself.  she even started crying after canada won and her friend had to console her.  LULZ.  i know this isn’t baseball, but for some reason i can still picture tom hanks saying ‘there’s no crying in volleyball!’

so these guys were the best i’ve seen so far but the four players in the finals from brazil & austria were simply animals.  i mean, one guy on brazil looked like he was about 6’79” and all his spikes were going vertically down.  his partner was at least a foot shorter than him and was spiking them in the same way.  my volleyball dreams were officially crushed at this point.

team austria were no slouches by any means and they stole the second set by changing up their strategies.  the level of play was much, much higher, not just with harder spiking but less missed serves and better defence resulting in longer & more dramatic rallies.  to hear the crowd ‘ahhhh’ on every saved spike reminded me a lot of the drawn out rallies in tennis.  after about an hour, brazil powered their way through the third set and walked away with the championship.

an awesome way to spend the day.  it made me miss vancouver a little bit but hopefully we’ll be back home to enjoy the last bits of summer