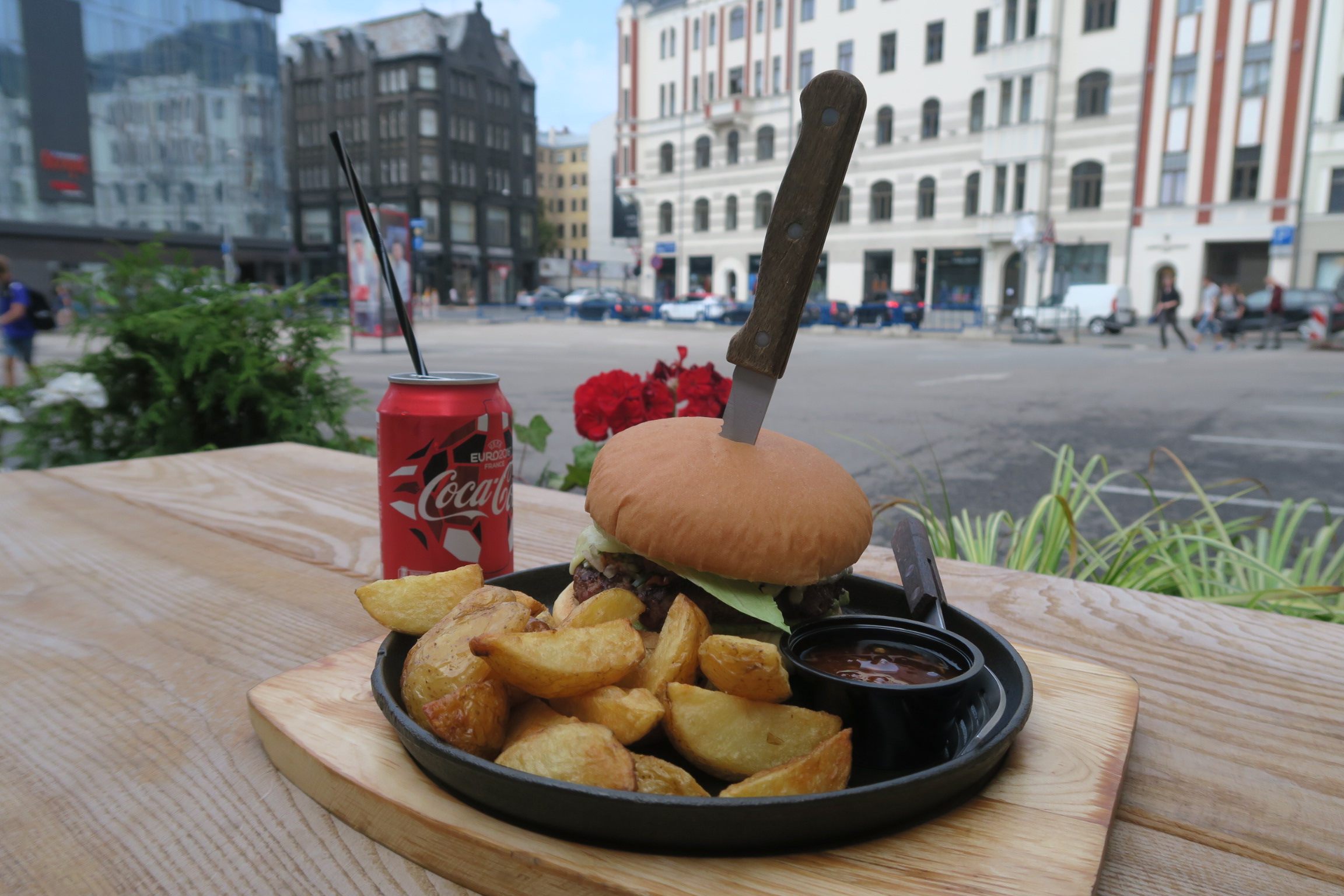 jojo:
what do i like?
-very pretty city.  the skyline has lots of churchtops and spires, a river runs through the middle of the city, lots of reconstructed buildings from the war era and also many new modern buildings with the infusion of eu & tourist dollars

-good value for our dollar.  the prices here are very competitive as good, complete meals can be had for well under 10 euros.
-the food scene offers loads of options here.  although we haven’t found our way to any of the nicer restaurants yet, the ones we’ve got on our hitlist all have entrees in the 6-10 euro range.  something comparable back home would easily be twice the price if not nearly triple.  having said that, sushi and asian food is still to be seen everywhere.  what the heck?
-that we’re within a 30-60 minute ride to a gigantic coastline of the bay of riga which is connected to the baltic sea.  the beaches are endless with fine sand and many meet blue flag standards which in a nutshell mean that the beaches are sustaianable and very clean both in and out of the water

what do i dislike?
-well we haven’t really had anything to dislike about the city yet but i have to admit that i am a little guarded.  moreso than anywhere else i’ve been this trip.  our research on riga had pulled up loads of (i mean hundreds of very accessible) reports of people getting things stolen and more commonly, lured into bars and essentially held for ransom until they pay up for the 200+ euro drinks that their new ‘friends’ had just ordered.  coercion into using their atm & credit cards which result in the scammers bleeding their account/credit limit dry by the time they wake up and usually a knuckle sandwich to top it all off.  these aren’t one-off stories, i literally read hundreds of accounts which seemed to run from about 2006-2014.  for some reason or another they seemed to stop around two years ago and travellers have since touted riga for being very safe.  while i have to agree with that thus far, i can’t help but be more guarded especially since we haven’t really had to worry about that for a huge portion of this trip.

what do i like/dislike about the new accomodations?
-holy swankiness batman.  this was one of our first choices for airbnbs as we were deciding whether or not to come to riga and we booked it without doing much research on the city.  afterwards we noticed that there were no reviews and also that riga has a very well documented history of being the scam capital of eastern europe (although not airbnb related).  so when we got here, we met our host downstairs and he took us into an extremely old & run down building with a steep, spiraling staircase of narrow stairs up five floors.  there were flies galore and some stairs were chipping as well.  as we opened our doors, we walked 50 years into the future.  the place is ultra modern, very efficient with space usage, fully stocked and furnished because he lives/lived here and although it is a studio, he has two tvs equipped with wireless displays so that we can stream music & videos from our phones/tablet/laptop (hurrah for the it geek in me).  a very nice place and under our budget as well as being in a relatively nice part of town.

biggest adjustments from the previous stop?
it feels much more lively vs warsaw.  not to get down on warsaw but the city had this feeling of gloominess over it.  i don’t know if it’s from the city’s history or that most of the people are vegans but it just felt quite sedated.  i’m hoping that the historical sights we visit won’t be as gloomy as those in warsaw but i don’t think it’s possible that they could be any worse.  suicidal people could leave warsaw and feel better about themselves.

what was our first meal?
b burger.  a small shack that’s has half its seating and the kitchen underground and the other half facing a large, closed off parking lot.  for 5.90 euro, some seriously kickass fries, dipping sauce, a drink and a monster of a burger.  for a city rated as the 7th most expensive in eastern europe, money still goes pretty far here.

overall impressions?
i’ve enjoyed our first 24 hours in latvia and i’m glad that we decided to come here over poland.  riga was named europe’s culture capital in 2014 and the city looks to have good infrastructure in place to explore the region.  a part of me is still comparing latvia’s beaches to those in portugal since we were hoping to be there at this time of the year so these beaches have some big shoes to fill.

There are lots of nice parks and buildings in our area. The architecture here is known as art nouveau which has some very interesting building facades. The neighbourhood has lots of cafes and restaurants close by.

Nothing at all. As jojo mentioned, we were really worried that Riga was going to be a bit dangerous. Such fears turned out to be groundless. In fact, the city is in a state of renewal with it’s mixture of restored old buildings and new modern towers. People here look like they do well, at least they dress really well and drive really nice cars. We look like unemployed bums (which we are) next to the locals.

I could do without the five flights of stairs to get to our airbnb. The lights don’t all work so it gets very dark at night. But once we get inside the airbnb, it’s all good.

Riga is not much different from the other middle/eastern European countries we have visited. We were expecting it to be rough around the edges which is not the case. By the number of vegan and sushi restaurants populating the city, it’s definitely embraced the western lifestyle, whatever that is.

My burger came with guacamole sauce and wedge fries.

I really like Riga so far. It’s cheap compared to other countries in the EU. We have a great airbnb place to have as our base for rainy days and beaches to chill out on when it gets sunny. So far so good.