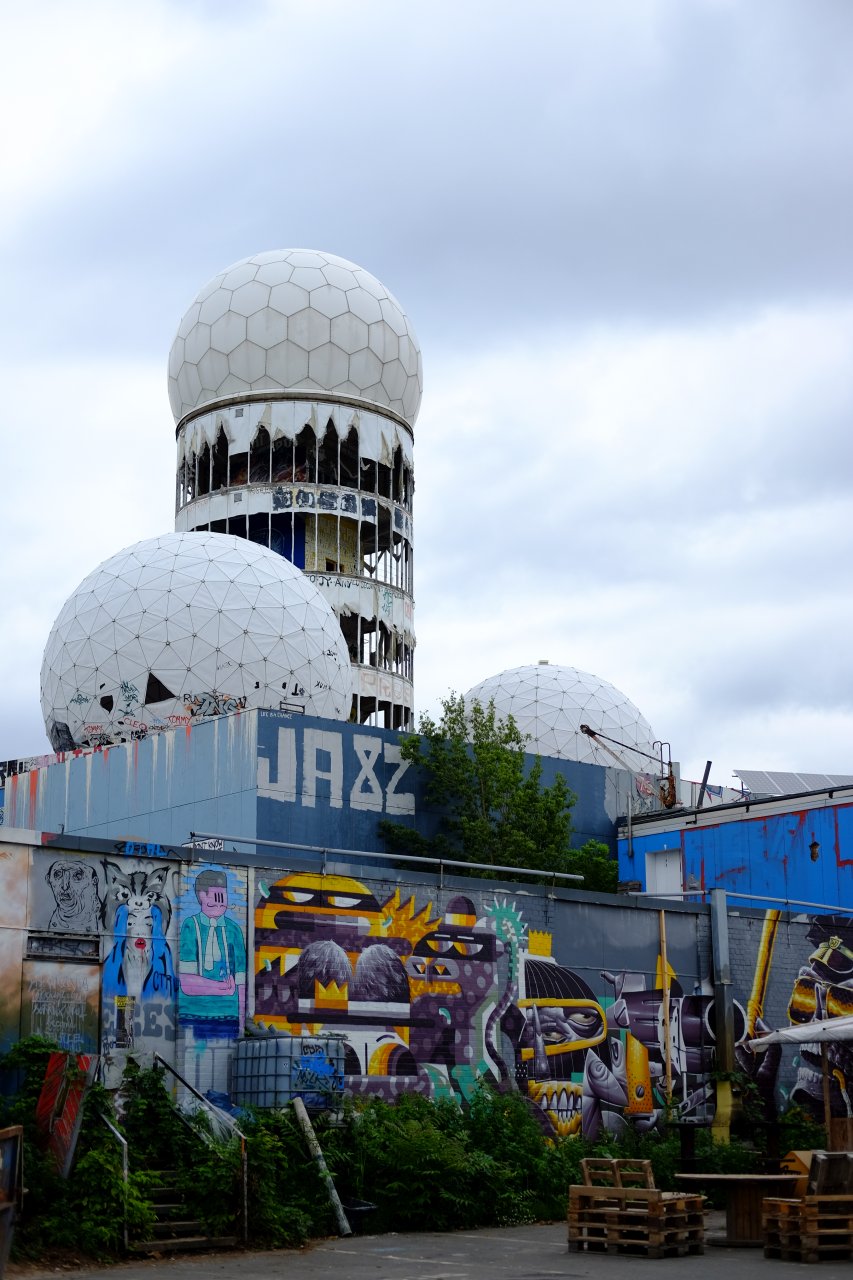 q. favourite meal
a. perogies, borscht and the polish version of a schnitzel at our first (but definitely not the last) milk bar

q. most memorable moment / best highlight
a. spending a few hours walking through teufelsberg (german for ‘devil’s mountain’).  from the 60s up until the wall came down it was used as an nsa base for spying on the soviets.  it has since been abandoned and covered from top to bottom in gigantic street art murals.  it’s still a decrepit building with a hollow elevator shaft, boarded up doors and lots of areas where one could fall 50+ feet onto scrap metal.  the views of the city were amazing, it’s serene and i was one of rougly only 30 people during the time i was there.  the architecture was from the cold war era and it has this mysterious aura when walking through it.  i love abandoned buildings…

q. greatest challenge
a. trying to balance relaxing with trying to make up for lost/sick time.  berlin’s by no means a small city and we covered a lot of ground during our stay and still only saw a fraction of what it had to offer.  on one day i joined a three hour street art tour and hiked my way to and from teufelsberg which is in the middle of a (unknowingly gigantic) park and my feet still felt like they were being jabbed with nails while i was taking my first gloriously relaxing bath of this trip.  it’s not often that we’ve stayed in hotels this trip so we’re taking advantage and enjoying these perks as much as we can lol

q. what i miss most from home
a. this is kind of a double edged sword for an answer.  it’s nice to be back in a comfortable bed, a shower than can boil and rip the skin off your chest if you so desire, a well stocked cabinet of tri-ply cookware and a chaise lounge with a brand spanking new led tv (ok so those last few items are much nicer than what we had).  as nice as all of that is, it makes me miss the apartment and furniture that we no longer have.

q. next stop
a. for the first time this trip, we’re not sure where we’re off to next.  we extended four more days in warsaw so that buys us some extra time.  we’re leaning towards the polish beaches in the north.

q. weirdest observation about current culture
a. well berlin was amazingly multicultural, much more than i was expecting.  the second largest turkish population in the world calls the city home and we also found a taiwanese restaurant that spoke, well, taiwanese.  seems simple enough but we don’t even find those types at home.  now in warsaw it’s the complete opposite; ethnic diversity doesn’t seem to be a thing outside of old town (purely from the tour group traffic).

q. one tip i would give myself if i were to come back
a. for berlin i would look to stay in either the mitte or kreuzberg neighbourhoods.  we found ourselves walking around those areas on four of the six days that we were in berlin for a number of reasons and enjoyed them for the art, restaurants and history.  kruezberg has very few large name chains shops as the residents are trying to preserve the community.  very, very different from the waterfront areas which are being redeveloped with condos, hotels and new retail space and will look completely different within a few years.  a lot of this is in part to a company called media spree.  how do the people feel about that?

q. friends i’ve hung out with/visitors
a. just the two of us.  we can make it if we try.

q. one random/weird/cool thing i learned about the country i’m staying in
a. all the history leading up to the empowerment of the nazi party.  we spent an afternoon at the topography of terror museum that focused on the rise, rule and decline of the nazis and everything was laid out in the open.  i clearly didn’t pay close enough attention in history classes not that i recall much nazi content.

q. portion of luggage that’s been the most & least useful
a. my micro usb > hdmi adapter that i picked up in taiwan back in march.  i bought it so that we could watch shows and movies on big screen tvs during our travels but we’ve either been in places that don’t have big tvs, big tvs that aren’t compatible with the adapter or have just been on the go that we haven’t hunkered down to watch any movies.  well as soon as we got to warsaw we camped out and watched season six of game of thrones in two days.  couch life is wonderful!