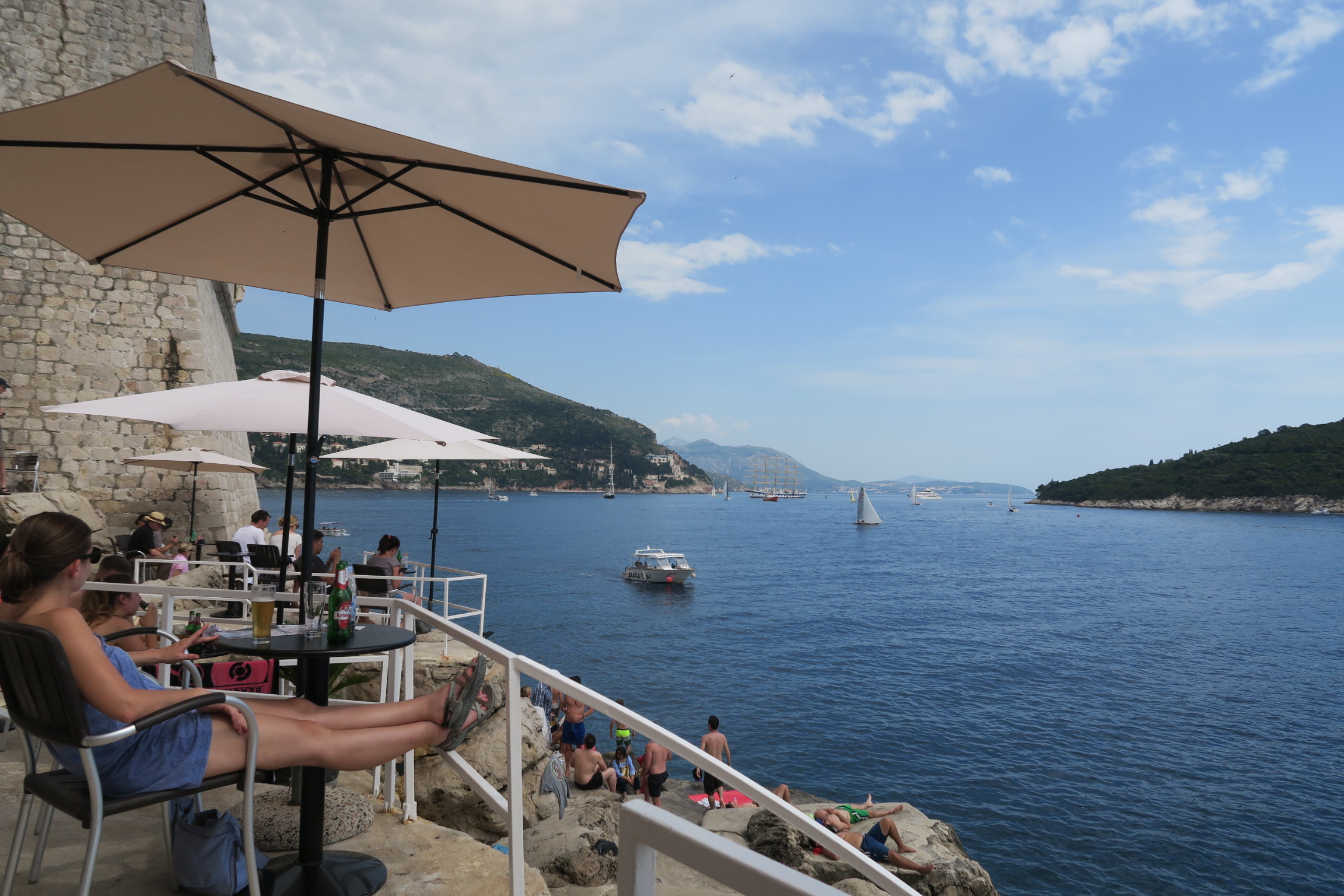 after a 3 hour bus ride from kotor we arrived in dubrovnik during a stretch of, surprise surprise, hot arse weather.  mid 30 degrees and almost 100% humidity.  we made the mistake of venturing into old town on a brutally hot day and there isn’t a whole lot of airflow once you’re walking through the narrow passageways.  i was suffering the most out of everyone as i’m next to useless in high humidity environments.

so we walked along the west side of the city walls (which were amazing and will have to be detailed in another post) and saw a hole that people were dipping in and out of.  we thought it looked a little odd so we followed the line, peeked in and managed to find that ‘hole in the wall’ bar that we’ve read so much about!

there’s no sign for the bar at least not until you get through the narrow corridor but this doesn’t translate to the place being devoid of people.  on the contrary, almost all the seats were taken and the ‘beach’ area was filled with sunbathers and cliff jumpers from end to end.  we grabbed a seat and some seriously overpriced lemonade (30 kuna / $6 cad) and sat back in the warm, sticky breeze.  but hey, at least we were on the water!

the top two ledges are reserved for bar seating but the lower beach area is open to the public.  beaches in croatia aren’t exactly the sandy ones that the rest of the world thinks of when they use that word.  instead, it’s an area where you can enter into the water and here, it is one where you can either push yourself off of a large rock or, what seemed easier, jump from one of the many ledges.

given how insanely hot the summers get here, this is the perfect spot to have a few drinks and get in for a dunk (i waive all liability if readers of this post decide to do it in that order) while everybody else is getting scorched along the city walls.  as all three of us are horrible swimmers we sat back and took in the show.  in some cases you can even see the thought process going through peoples’ minds as they walk up and start to second guess if it’s a jump they should take.  a few guys were taking running jumps off a 20 foot high platform.

and then a couple of the really strong swimmers made their way to the right of the bar, climbed up a steep ledge of rocks and jumped at least 30 ft into the water.