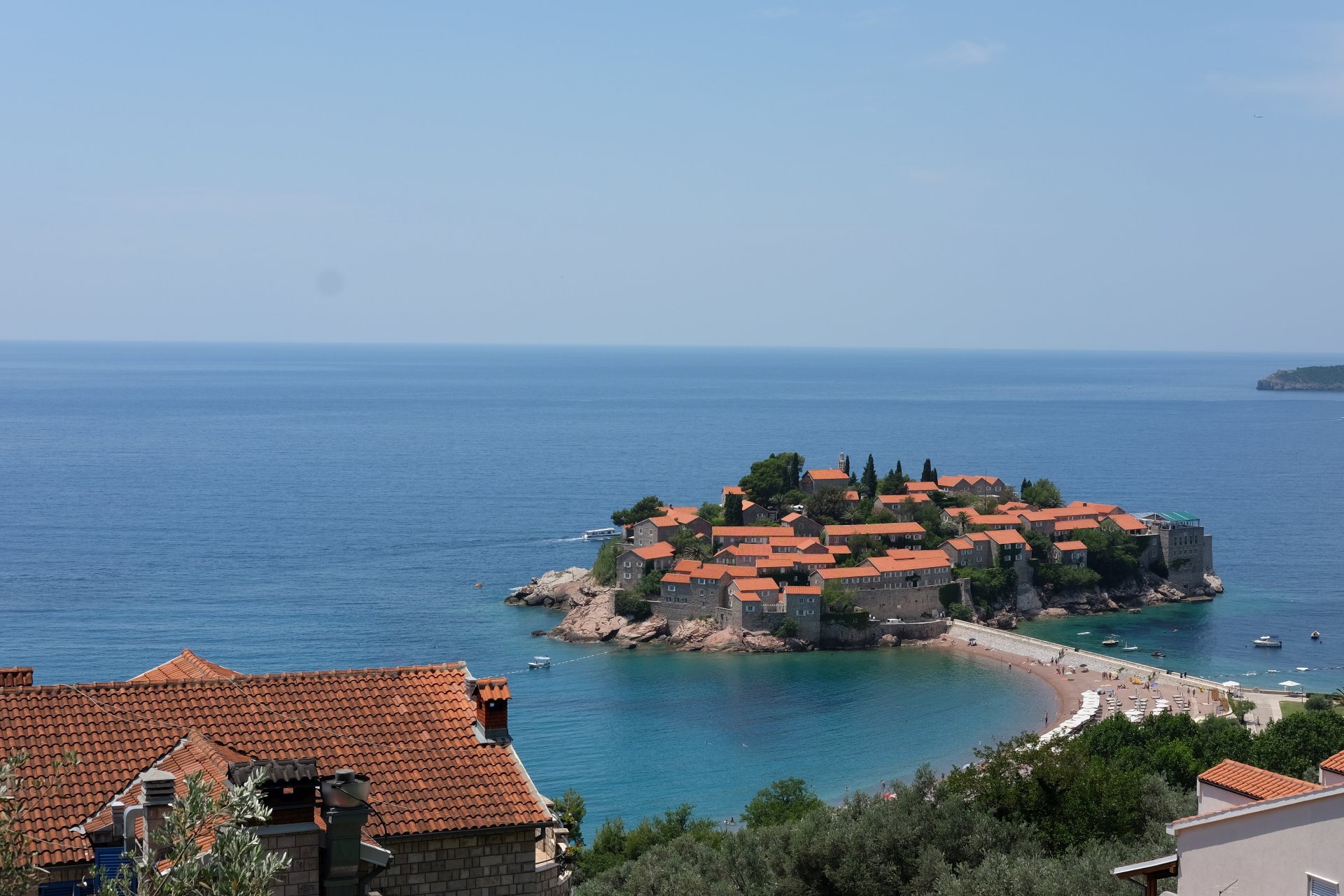 it doesnt take a lot of landlocked days in this heat to motivate us to find some water.  although we were staying right on the edge of the bay of kotor we hadn’t realized that the water around town isn’t ideal for swimming thanks to the proximity to the mooring area of all the luxury ships.  if you head north to perast, you can see small concrete piers that are used as tanning beds and diving platforms.  there’s even a small sandy beach in the town of perast however the water gets relatively deep so we left this to the good swimmers to handle.

the beaches that we took daytrips out to were:

-budva
this is the main town along the coastal waters and a major hub for all buses.  it looked so beautiful as we drove up the first time but after spending a few days in kotor, it changed our perspective completely.  upon arriving at the bus station you could feel the chaos.  if albufeira was a uk colony then budva might as well be a russian town.  there was nothing relaxing about budva and while it was kind of a waste of an afternoon, the saving grace for us was that we only spent an afternoon here instead of a full day.  the waterfront is very overbuilt with lounge chairs packed as tight as sardines

the water wasn’t particularly clean with all the bottles, cigarettes and trash that has found it’s way into the bay.  there are lots of restaurants to pick from however they do charge separately for the chairs; in the 8-12 euro range per pair from what we found.

i didn’t whip my camera out too often as nothing was really picture worthy aside from documentation purposes.  thankfully our next day worked out much better…

-plavi horizonti
a 15 minute ride (not a taxi ride as ‘dragon’ just hung out at the terminal looking for fares) from the bus terminal brought us to plavi horizonti.  this beach is located on the land mass on west side of the bay of kotor, facing southwards over a bay of its own.  the frontage is big, it is a sandy beach and is very local and family friendly.  the water is crystal clear, warm because it’s shallow and you can walk out over 50 feet before you’re waist deep. i brought my trusty paddleball set but the sand was so blazing hot that we were either on the chairs, in the water or getting a bite.  speaking of which, the menu was a bit of a gong show but we did have the pleasure of discovering what a european (or possibly just weiner here in europe) weiner soup tastes like.

-sveti stefan – luxury beach
our last daytrip was to sveti stefan.  this beach was a little further than budva but every picture i’ve seen of it looked like it should have been featured in a travel magazine (and probably was at some point.   so the history behind sveti stefan was that it used to be a destination for the rich and famous in the 60s-80s and has since seen a resurgence and redevelopment after the bosnian war era.  an hour long bus ride dropped us off along a highway at which point we had to make a 10 minute walk downhill to get to the beach.  this is what it looks like from afar: the islet is actually a 5 star luxury hotel and is private property for hotel guests only.  not that we had any chance of fitting in anyways… all we good do was oooh and ahhh.

getting down to the waterfront area, we weren’t surprised by the luxury appearance of the resort, gates and security to get onto the island.  we were surprised that there were still convenience stores to get cheap eats and drinks though.  our savings on our munchies were cancelled out by the lounge chair prices.  here in montenegro there are no freebies if you dine with the restaurant on the beachfront.  and these chairs started at 15euro per pair for the 3rd and 4th rows.  the two closer rows were charging 25 and 35 euros respectively.  yes.  50 canadian buckeroos to sit on a beach.

these weren’t even the most expensive seats in the house/beach though.  i’ve seen pictures of sveti stefan beach with the islet on the left side so i wandered over to the same spot and found a completely empty beach with a private waterfront to go with it.  sweet!  walking down towards it brings us to the security guards who kindly informed us that although these seats aren’t open to the public on this day, the following week they’ll be available for only 80 euro.  i had to ask three times to make sure i heard him correctly.  both of us were chuckling. not a bad place to spend an afternoon and definitely one of the most picturesque beaches i’ve been to.  because we’re in a small bay, the current wasn’t too strong, views were great and the waters were very clean.

there are so many beaches to pick from in the area and having kotor as a base is very handy since many buses run through there.  as well, it’s not as hectic as staying in budva though budva does have an even larger bus station.